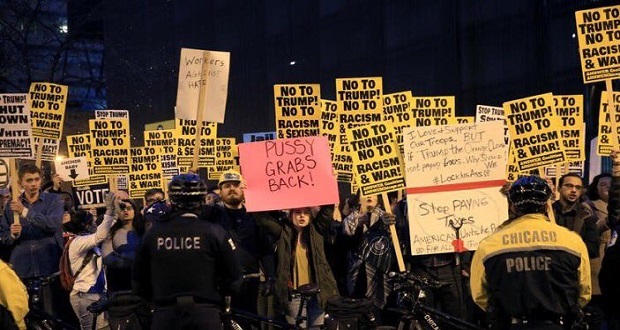 In the coming days, news sites will be clamouring to explain how Donald Trump grabbed the whole world by the proverbial p***y.

While newsrooms are hard at work rationalising how we should have spotted the weaknesses in Hillaryâ€™s campaignÂ and other telltale signs that Trump would win, a huge population of the internet that thought itself progressive enough to never let Trump happen is moving from wokeness to insomnia. Weâ€™re trying to recover from what is being treated as humanityâ€™s biggest own goal in the fight against all the oppressions since we let Coca-Cola sell us â€œhappinessâ€.

But itâ€™s going to sound a lot like that time Britain did the â€œunthinkableâ€ and voted to leave the European UnionÂ in favour of tighter immigration controls and economic nationalism (whilst retaining Indian food as a national favourite (-_-)).

What intrigues me most about the state of global political events and our responses to it is the shockwave that, without fail, seems to follow events that were presumed to be surely improbable. The reactions across the internet since Trump started leading the final polls have ranged from moral outrage to sheer disbelief. But should we really be this shocked?

If there was an intelligent species with a psychology major looking down at Earth right now, reading timelines and eavesdropping on water-cooler conversations, I suspect it would diagnose the lot of us with an acute type of trauma.

How do we deal with the news that the worldâ€™s most ridiculed political candidate is now president? How much does it really affect our lives, particularly those of us who are not US citizens?

Here is a brief, and imperfect, treatment for the shock that is Donald Trump becoming the 45th democratically-elected president of the USA.

It may or may not come as a surprise that the ones most affected by this trauma are those who might self-identify as critical thinkers, progressives or at the very least, liberal. These groups are likely to be hyperactive on social media platforms – while an even smaller proportion of these groups will take to the streets – organising among those who do not have as much social and technological capital – in order to protest for the issues being hashtagged. Generally, this group is educated and highly critical of the status quoâ€™s tendency to keep marginalised groups in service to a global minority. Anger and exasperation are dominant emotions at play among us – particularly online – with hope and radical imagination only just starting to bloom (with the help of Solange and Steve Biko revivals).

Little do we heed the design of social networks
Matthew Rightford, director at music label, naas, summarised the self-harming situation of social media bubbles: â€œWhile the introduction of social media had the ability to open our worlds to other cultures, other opinions and expand our consciousness, weâ€™re now â€˜trappedâ€™ in a curated world of sameness.â€

Basically, the more we â€œLikeâ€ certain statuses, articles or pages on Facebook, the more Facebook picks up on what we actually like and donâ€™t, and it will gradually begin showing us less of the stuff that annoys, offends or scandalises us.

This is not entirely a bad thing. If you use social media for things that only inspire you or make you laugh, youâ€™re well within your rights to cut out the bigots and the poor souls who think theyâ€™re funny. But if you fall victim to the belief that your curated social media world represents â€œeveryone in the worldâ€, youâ€™re likely setting yourself up for shock and disappointment in humanity.

Being mindful of the limitations of oneâ€™s social media is as important as being mindful of the biases of mainstream media and politicians. And itâ€™s especially true for those who believe that â€œeveryoneâ€ wants a progressive, morally upstanding leader without stopping to question whether â€œeveryoneâ€ actually holds the same belief or the same understanding of progress and morality.

If staying informed is your social media mission, then maybe follow at least one thing (person, page, website) from all points on the political or ideological spectrum and donâ€™t ever â€œLikeâ€ things. That way, social network algorithms may take a little longer to figure out what your information bubble should look like.

In an attempt to deal with the shock of Trumpâ€™s election,the internet is exhibiting all kinds of coping mechanisms. To me, the most interesting of these mechanisms is the hunt for scapegoats.

Stats revealing the demographic composition of Trumpâ€™s victory paint a picture that is majority white, but also supported by a significant number of black and Latino Americans. The response to this intel has not been to listen to why groups so explicitly othered by Trump himself would vote for Trump, but rather to drag them swiftly into the category reserved for traitors.

But is dragging the best vehicle towards safe, intersectional, spaces? Iâ€™m not convinced.

Firstly, dragging (otherwise known as using mob-morality in promoting learning and unlearning in pursuit of social justice consciousness) is at its core, a form of othering and collective punishment. When viewed from this angle, it is not difficult to see that dragging is a tool to create a safe space founded on the exclusion of those deemed problematic enough.

The question then is: can a safe progressive space exist authentically if it is conceived through othering? This is not to suggest that Trump should not be dragged for his blatant misogyny, but it is to caution against dragging, for instance, a black male Trump voter as a white-supremacy sympathiser because he may have voted for the lesser of two evils in his world.

Secondly, and more importantly, the focus on shunning minority groups who helped push Trump past the finish line distracts us from the task of acknowledging that over 50% of voting Americans voted for their safe space as it was sold to them. The fact that this safe space was explicitly built on principles of racialised economic development, gender inequality, religious bigotry and environmental unsustainability – that is the deeply troubling part. That is the part that demands creative, critical and radical attention.

Thirdly, we must unequivocally acknowledge that humans are overwhelmingly led by their emotions. And when those emotions are socialised and rewarded within what is a patriarchal, white supremacist system to some, yet a liberal, competitive system to others – we must acknowledge that we have a far bigger problem on our hands. The problem is that an overwhelming majority of people seem to feel safer when they have the opportunity to thrive in what is an inherently oppressive global order that places individual comfort at the axis of power.

No, I donâ€™t mean empowerment as in â€œgrab her by the brainâ€. We desperately need less unsolicited grabbing of things.

Trump is the second instance in one year that conservatism proved a more formidable force than progressive rhetoric, the first being Brexit.

But not even Hillary was the ideal winner as many intellectuals and progressives reminded us. Hillary was, if anything, the better bet – not because she was more qualified, but also because she represents a familiar brand of force (read: neocolonialism). Although not as explicitly prejudiced and isolationist as Trumpâ€™s policies, Hillaryâ€™s policies represent the same flavour of implicit prejudices that:

Simply put, America has long been problematic. And Trump is, perhaps, its full monty.

Perhaps those who identify with calls for international social justice and solidarity have some reckoning to do. Perhaps itâ€™s time we seriously wake up to our usage of social media as an agent of our own shock. The sooner we do that, the sooner we can set about creating more space for critical imagination. Social paranoia, after all, is not a good host for constructive thinking.

If the shock of Trump and the heralding of the end of the world is a feeling we do not wish to trap ourselves in again, we need to reflect on how we got ourselves here. This is not just a matter of America-bashing. This is a matter of awareness of the decisions made at the highest seats of power that affect our own economic policies, educational and social infrastructure. This is a matter of becoming better equipped to rally for global policies that are pursued with the best interests of all – in addition to coming up with the best jokes the internet has ever seen.

But for now, since weâ€™re still fresh into the decline of the world as we loathe it, weâ€™re allowed to freak out.