Home Fascination Tsoku Maela: Femininity As A Shade Of Love That We Should All...
WhatsApp
Facebook
Twitter
Email
Print 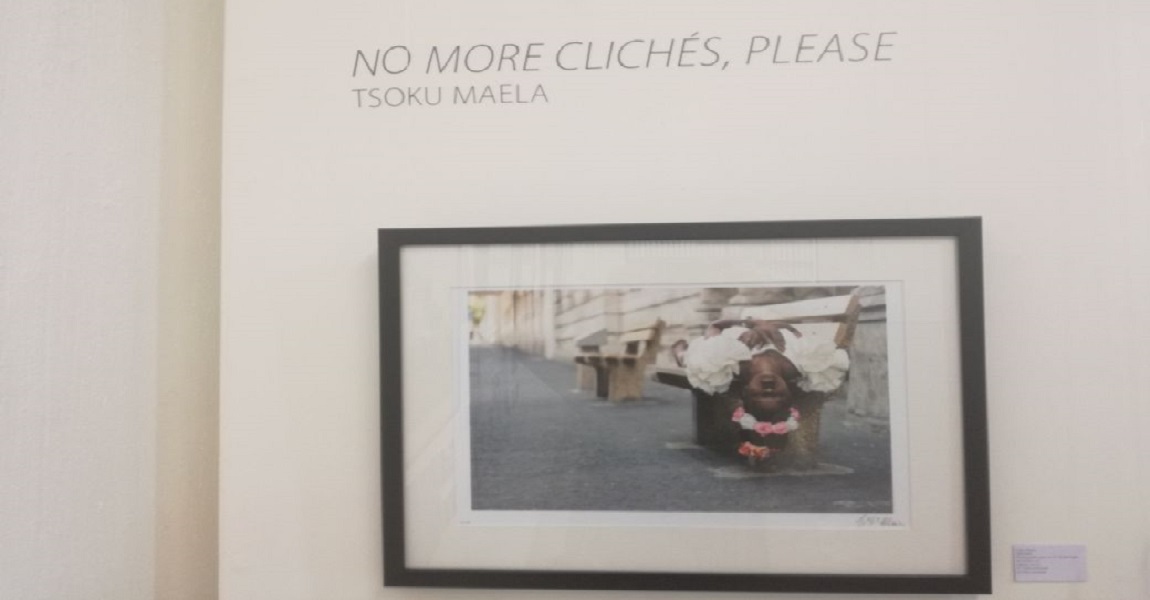 With No More Cliches, Please artist Tsoku Maela endeavours to capture the resistance of brown women and to address the clichÃ©s associated with resistance and the brown female figure. Maelaâ€™s body of work melds imagery, poetry, and protest in a carefully curated array of photographs, poems, emails, tweets, and recordings of conversation and song. The exhibition is a conversation about the clichÃ© of resistance often encapsulated in the contours and shapes the brown female figure. The Daily Vox spoke to Maela and visited the exhibition.

The body of work is a new exhibition in itself. Itâ€™s my first solo in Johannesburg. I decided to go with a different collection of work looking at the female form, more specifically the brown femme form. Iâ€™ve been shooting these images since about 2016. Itâ€™s like a curation of all the awesome work of brown femmes who have given me consent to use images Iâ€™ve taken of them. Itâ€™s a study of the brown femme form. Resistance could be anything that subjugate your will to be free. Iâ€™m interested in looking at the idea of how brown femmes are considered to resist struggles or depicted in the media on things like femicide, interpersonal violence or domestic violence. Itâ€™s not necessarily toyi-toying in the street saying free education for all. Resistance is choosing your way over society’s way. A black women who stands up and says my brown skin is beautiful, that for me is resistance. Youâ€™re choosing your way. I choose self love as a form of resistance for a brown femme form because its seen as inferior to whiteness. Iâ€™m trying to reframe the concept of resistance that stems from a sense of self love and just love in general for other brown femmes and for other human beings alike. Thatâ€™s how I conceptualise the brown femme formâ€™s resistance in the world – not this idea of angry people but this idea that we love so we are willing to die and fight for it. Every single one of those women in the recordings – the conversations you hear in the audio were sent to me as voice recordings and voice notes which Iâ€™ve recreated (not Nina Simone of course) – the photographs are all my friends, my family. The recordings femmes are speaking to frivolous shit, political stuff, about everything. Males do that too but why do we think itâ€™s so different? Weâ€™re having the same conversations, we have the same aspirations. All the poems and photographs that Iâ€™ve chosen are based on the conversations in the recordings. The headlines on the cover image, the vague cover image, those are topics that are being negated in mainstream media. Iâ€™ve spoken in depth with the women in my art about femme identity, thatâ€™s where I get a lot of my understanding barring the fact that I was only raised by women as well. It doesnâ€™t give me the leeway to be empathetic about femme identity. I can other be sympathetic about it because I donâ€™t really understand what itâ€™s like to be a woman, I can only understand from a human point of view. If someone says they were bullied in school for the colour of their skin, I could relate to that but if someone says men were catcalling me in the street I could never relate to that because as a male Iâ€™ve had the privilege of not being catcalled in the street. Iâ€™m using my presence as a male black body – which is often seen as a destructive force – as a constructive force. I am part of the problem, Iâ€™d like to be part of the solution. You canâ€™t have a conversation about femicide without speaking of the preconditioning of young men to be violent. As a black male body, Iâ€™m being conditioned to hate you but Iâ€™m trying to love you. If Iâ€™m not being destructive in the conversation, I donâ€™t see how Iâ€™m consuming the brown femme experience. Where are we getting our wires crossed as males and females in the world? Is it because weâ€™re conditioned to think we are so different? That for males success is determined by bigger, better, faster, sexual conquest and capitalist gains and for females itâ€™s like you look pretty, if youâ€™re not skinny youâ€™re not pretty enough? Boys are playing with guns and toy cars and women are playing with Barbies and pink is supposed to be their favourite colour but why canâ€™t a male child like pink? Itâ€™s the language that we use to raise our children that makes us think weâ€™re so different. What calmed my anxieties of being a black male form photographing brown femmes is how I saw them. How I captured them showed me how I thought about them – in a tenderness, a gentleness, as royalty. That helped me think it wasnâ€™t that bad to be part of the conversation as a black male body.