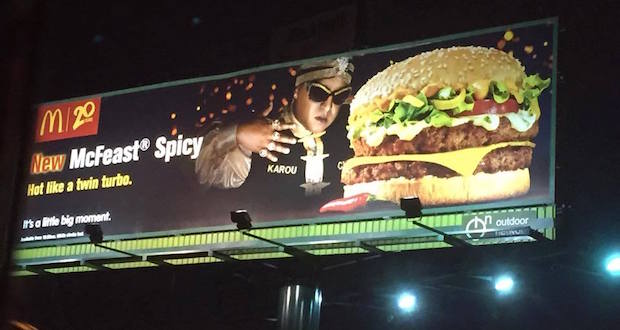 McDonaldâ€™s new advert for its McFeast Spicy burger has comedians Karou Charou and Simmi Areff playing into just about every stereotype about South African Indians you can imagine. Not surprisingly, it hasnâ€™t been to everyoneâ€™s taste.

The ads features three Indian guys with exaggerated Durban Indian accents talking about their mothers, their mags and their love of spicy food. Letâ€™s not even get started on the hokey outfit, which granted goes with Karou Charouâ€™s whole schtick, but if you donâ€™t even know that this person is a comedian to begin with, how are you supposed to read this gag?

Fans of Karou Charou seem to love the ad, but others were angered by the advertâ€™s use of stereotypes and went so far as to call it racist.

When brands want to speak to “demographics” and then engage stereotypes. If a brand manager is culturally inept, they shouldn’t be there.

So @McDonalds_SA has an ad for a new spicy burger up. Complete with an Indian guy in “eastern” wear with “karou” and a twin turbo punchline.

Whatâ€™s your take on this ad â€“ innocuous or offensive? Let us know in the comments below.