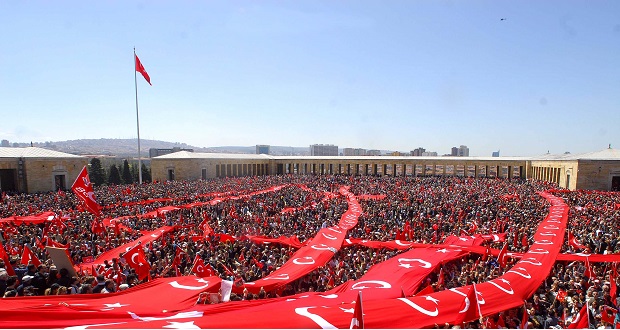 Turkey is set to undergo major constitutional changes, with its parliament currently voting on a constitutional Bill, which will change the system from a parliamentary one to a presidential one. The main opposition is against the changes saying they â€œcould put the country at risk of growing authoritarianismâ€.

The Daily Vox team looks at what these changes will mean for Turkey and its position in the region.

The proposed changes are not new. The ruling Justice and Development Party (AKP) has had these constitutional changes as its policy for quite some time. It first proposed the changes after it won the 2011 general election. However, the proposed changes were shelved because no consensus was reached in parliament.

These changes have been a low-key policy for the party since the 2014 election in which Turkeyâ€™s current president, Tayyip ErdoÄŸan, was elected. In October 2015, the Nationalist Movement Party (MHP), an opposition party, called on the AKP to bring forward the proposal of changes again. After several months of negotiations, the AKP and MHP reached a consensus on a proposal for the parliament and then started initiating a parliamentary process of a referendum on the proposal on 30 December 2016.

Turkey has had six referendums over the past fifty years, the most recent one being in 2010, in which citizens voted to be able to directly vote for their president. Previously, it followed the parliamentary system in which voters chose a party and the elected parliament would vote in the president. The new proposed system, which would follow a presidential one, means the heads of state and government are the same, so there would be no prime minister. Currently, the president is the head of state while the prime minister is the head of the government.

Unlike the parliamentary system, where the president is supposed to have a more ceremonial role, in a presidential system, they have a lot more power. However, Erdogan has managed to take the largely ceremonial role and turn it into a position of great power.

What are the proposed changes?

If and when the referendum does take place in Turkey (proposed to be by April 2017), voters will be deciding on the proposed amendment of 18 articles in the Turkish Constitution. ErdoÄŸan and the AKP are proposing changes which include: the introduction of an executive presidency that would replace the existing parliamentary system of government, the abolition of the Office of the Prime Minister, the raising of the number of seats in Parliament from 550 to 600, and reforms to the Supreme Board of Judges and Prosecutors.

Other amendments include a change that would allow ErdoÄŸan to stay in power until 2029. Overall, most of these changes would result in more power for ErdoÄŸan. The 18th and final amendment dictates by when these changes will come into effect.

Researcher at the Afro-Middle East Centre, Ebrahim Deen, says: â€œI think the changes are very internally-focused. One thing you need to note is that these changes that are drafted and gazetted may or may not pass, as firstly they go to a referendum because the AKP doesnâ€™t have a two-thirds â€˜super majorityâ€™. It could come back after a referendum.â€

Deen says these changes are nothing new. â€œThere has been a move in Turkey for a while towards a more presidential as opposed to a prime ministerial system which would allow the president to control and dictate foreign policy more. So from a regional perspective it would give the regime more power to affect its policy. They wouldnâ€™t need to seek acceptance from parliament for every decision that they make and they would have more ability to influence stuff without needing endorsement from the parliament.â€

The changes have been there for the past couple of years, he says, but they have just increased pace post-coup. They would need to go a referendum, â€œfollowing from that there would be a new constitution,â€ says Deen. The president will control foreign policy, the ministers, domestic policy.

The president will be able to declare a state of emergency whenever he sees fit without any approval from the parliament, will have the power to issue executive orders and appoint cabinet members. The legislation would come into effect in 2019 and it would allow ErdoÄŸan to serve two more five-year terms.

What do the changes mean?

Kemal GÃ¶zler, a Turkish constitutional expert, has written on what exactly the proposed amendment changes will mean for Turkey, including the fact that the changes could result in its parliament becoming effectively powerless and the president having complete control over the executive, legislative and judiciary.

It is assumed in most circles that ErdoÄŸan is pushing for the changes now more than ever before because of the failed coup that took place in July last year. Even as it took place, most people outside Turkey assumed it would succeed. Yet, the people of Turkey rallied around ErdoÄŸan and resisted the coup effort.

It is perhaps this support that has driven ErdoÄŸan to pursue this now; to ride the wave of momentum and hope the people support him in the referendum.