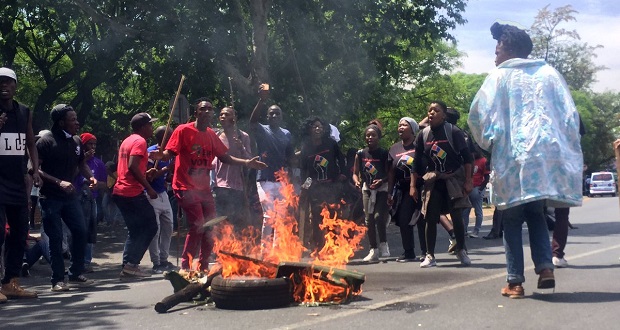 The Tshwane University of Technology (TUT) was scheduled to resume its academic programme on Wednesday morning. However, the entrances to the Pretoria West and GaRankuwa campuses were barricaded with burning tyres.

Protesting students refused to allow students and management through, calling on management to shut down the university until government addresses the call for free education.

TUT spokesperson, Willa de Ruyter, confirmed that academic activity would be suspended on Wednesday as protests flared up on the GaRankuwa, Arcadia and Arts campuses.

â€œStaff and students at these campuses were advised to go home for today, while management assesses the situation,â€ said de Ruyter in a statement.

Meanwhile, the protesting students at TUT gathered in front of the barricaded entrances early on Wednesday morning and began moving into residences, mobilising fellow students to join the action.

The students, escorted by the police, marched toward the CBD bent on shutting down other TUT campuses and FET colleges situated there.

Now #TUT students have left main campus. They plan on ‘taking over’ other campuses located near the CBD. #Fees2017 pic.twitter.com/ziKbpzDTTY

Students had decided to shut down the university following a mass meeting and night vigil that took place at TUT on Tuesday night.

“We are calling on them to shut down, give us busses and march with us to demand free higher education. It’s as simple as that. We are not fighting with them, we are fighting for free education. The more they resist, the more they provoke students,” he said.

The protesters then attempted to shut down the CBD. Many shops closed their gates as the protesters drew near. There are reports that protesters used a fire extinguisher to force one shop to close.

The group also tried to disrupt a school to get schoolchildren to join the protests.

Student leaders desperately attempted to retain control of the situation by calling on the masses not to loot, break or destroy anything or threaten the media. Student leaders reassured the collective that their shutdown would not be violent as this would not solve any of their problems.

The SRC of TUT, which is Sasco-led, had previously distanced themselves but appear to have collaboratedÂ with the Economic Freedom Fighters Student Command (EFFSC) and other student structures to coordinate a shutdown.

Police fired rubber bullets and stun grenades at students protesting in the CBD in attempt to disperse the crowd.

De Ruyter said that the university had adapted its academic calendar to ensure that the 2016 academic year is completed successfully. Classes are set to resume on Thursday with a heightened security presence. Staff and students were warned that they need to provide TUT identification cards for access to the premises.

When #TUT students go on strike you know it’s gonna be lit. And I mean that literally. ðŸ”¥ðŸ”¥ðŸ”¥. Those guys don’t play.