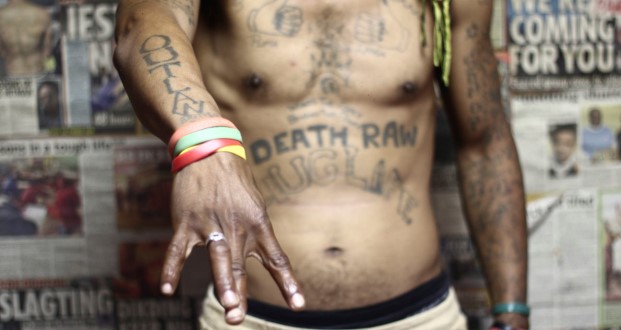 Tupac’s most ferocious diss track is the ambient noise to life on the Cape Flats.

Hit ‘Em Up was released mere months before Tupac Shakur was gunned down in a drive-by shooting in Las Vegas, inflaming the East Coast/West Coast rap feud that contributed to his death. On the track, Tupac attacked rival rapper Notorious B.I.G., claiming to have slept with B.I.G.’s wife and questioning the street credibility of rappers linked to his label Bad Boy Records.

Today, Hit ‘Em Up dominates playlists on the Cape Flats. “Grab your Glocks when you see Tupac” – the track’s bellicose chorus – booms from car stereos and crackles defiantly from strained portable speakers. Its lyrics are almost universally known and recited, providing a soundtrack to the lives of people residing in communities like Hanover Park.

Hanover Park’s original inhabitants are mostly from Cape Town’s famous District Six – a former inner-city residential area that is celebrated for its racial diversity and community cohesion. Its destruction has come to symbolise many of the tragic social effects of apartheid. The social disorganisation caused by the removals is an important reason communities like Hanover Park struggle with violence today. A 2013 study found that almost all school children living in Hanover Park had been exposed to violence, and 93.1% were exposed to two or more types of violence. Poverty is rife in the community, which is typified by graffitied three- and four-story concrete, walk-up flats, and there are few opportunities for upward mobility. The 2011 national census showed an unemployment rate of 35.6% for the area.

Forty-three-year-old Hanover Park resident Ernesto de Almeida was a “gunman” for the Backstreet Kids street gang when he was sentenced to twelve years in the notorious Pollsmoor Prison for murder. He joined the 26s prison gang and was given the nickname Tupac because of tattoos he got while incarcerated. Like Shakur, De Almeida has the words “Outlaw” etched on his arm and “Thug Life” tattooed on his stomach.

For De Almeida, Shakur is “a prophet because he speaks reality.”

“[Hit ‘Em Up] taught me to stand for myself, no matter my surroundings, no matter if people don’t believe in me,” says De Almeida. “I will show them. I will hit ’em up.”

It is the kind of do-or-die mentality one needs to survive in an environment where violence is a norm.

Shakur’s childhood in East Harlem was characterised by poverty, violent crime, and addiction to substances. More than 20 years after apartheid officially ended, such problems are common on Cape Town’s urban periphery, where racial and social alienation, frustration, and aspiration find expression through Shakur’s music.

Shakur served time in prison for sexual assault before he died, and themes of violence and incarceration feature prominently in songs like Hit ‘Em Up. De Almeida is a living testament to how Shakur’s music mirrors life on the Cape Flats.

“I’m a product of what had happened to us – specifically, apartheid,” says De Almeida. “[The apartheid government] took our home away from us, they took our language, our culture, and now we are [considered] skollies – we are scum. You must come and see how we live in the backstreets [of Hanover Park].”

Life can have harsh consequences on the Cape Flats: a few months ago, a 21-year-old Hanover Park man – who also went by the nickname Tupac – was stabbed to death in a gang dispute. De Almeida credits the influence of Shakur’s music for helping him leave gangsterism, and avoid a similarly tragic ending.

“Tupac was my friend in prison. Tupac is my friend in the struggle. Tupac is the voice within my head,” he explains. “Tupac did bring me away from the [26s gang]. Tupac gave me sense again.”

But for others, Tupac was instead an entry point into gang life.

His legacy resonates with young men, like 29-year-old Gordon de Bruin, who face violence, poverty and family problems, and who are often driven into gangsterism through a need for protection and respect.

De Bruin, a former member of the Mongrels, one of Cape Town’s oldest and largest gangs, recalls the first time he heard Hit ‘Em Up. “I was still a little boy back then that Hit ‘Em Up shit, the first time I saw that music video, my older brother said: this is Tupac.” Until then, nine-year-old De Bruin believed Shakur was a cartoon, after watching the animated video for the song Do For Love.

As a boy, De Bruin only spoke Afrikaans and could not understand the song’s lyrics. But Hit ‘Em Up still exerted considerable influence over him. “I see the big boys, they always moving Pac-style. And I’m just a little motherfucker, moving with my brother and them,” he said.

De Bruin’s older brother was a member of the Mongrels, and the reason he joined the gang. His brother was shot and killed when De Bruin was 13. De Bruin became a Mongrel to seek revenge. He eventually served 13 years in prison for murder.

De Bruin is now trying to stay out of gang life and working to make it as a rapper. He is spending this year trying to convert the stacks of notebooks he filled with lyrics during his time in prison into hits. De Bruin says he wants to set an example, “like Pac [is], for another kid like me, that is coming from the gutter.”

Shakur holds considerable sway among gangsters on the Cape Flats. Gang members regularly listen to his music while smoking methamphetamine or tik to get ready for a gang hit. Hit ‘Em Up “makes the guys’ minds crazy,” says *James McKay*, another Mongrel.

According to McKay, Shakur’s movies are also hugely influential: “There was a movie that time from him, when he took his gun mos so [shooting it sideways], and we do so [as well], you see. We don’t shoot [straight]. No, we say: fuck you man, fuck you [and shoot like him].”

In the last year, McKay has also been trying to leave the Mongrels, where he was one of the leaders. At 42 years old, he is one of the gang’s oldest living members.

“I know in my time I did do a lot of things wrong – killing people, and hitting people sommer dead – that is the power that I did have,” he says. It’s the same power projected through Shakur’s lyrics and beats. Says McKay, “He wasn’t scared about people, man, or what people going to say. He just do it, if he want to do it.”

Now McKay wants to change his life. He is currently training to become a part of Hanover Park’s Ceasefire project, through which ex-gangsters work to mediate gang disputes and pull young men away from gangs.

Shakur’s influence on the Cape Flats is not limited to men. “Many females, they look up to men like that. It was the type of boyfriend you’d want to have, the type of husband,” says Martina Martin, a social worker for Hanover Park’s First Community Resource Centre (FCRC). In addition to running the Ceasefire project, FCRC also provides counselling, drug awareness campaigns, soup kitchens, and career services for Hanover Park residents.

“His women, he would probably treat them as his queens. His enemies, or people that would look down on him, he was more referring to them [as bitches].”

Though songs like Dear Mama and Keep Ya Head Up honoured women, Shakur also used derogatory language towards women, and degraded his enemies by feminising them. In Hit ‘Em Up, he refers to East Coast rappers Notorious B.I.G. and Junior Mafia as “mark ass bitches.”

Martin’s story is one of achievement through struggle. She grew up with an abusive and alcoholic father, whose death she witnessed in front of her home at the age of 12. As an adult, she fought drug addiction and became HIV positive.

Shakur’s music has been a constant throughout her life. For instance, she says she listened to Hit ‘Em Up when she was “young and partying.” Now, at 33 years old, she has been clean from drugs for 10 years and draws on her personal experiences in her work.

Because of her commitment to providing counselling to those with HIV and substance abuse problems, the track Changes has come to take on added meaning. “His music speaks to different parts of my life, even up until today,” she says. “Today, it’s not about HIV, it’s about knowing that other people are being infected. Other people are living a life thinking they going to die, but here I am living a positive life, living happy.”

Martin’s colleague, 30-year-old Devon Swartz – also a facilitator at FCRC, who works with Hanover Park youth at risk of drugs and gangsterism – says Shakur was also a huge influence for him. Swartz grew up without male role models in his life and had his own problems with substance abuse.

“I didn’t have a father. So I was learning from these guys that were rapping – from Tupac [and others].” Rap music provided a release and escape, as well. He explains, “I had two sort of drug. If I couldn’t get my hands on a drug – on weed, on heroin, on whatever – music got me through.”

“[My friend’s] dad was also drinking and gambling, and things like that,” explains Swartz. “We used to sit in his room and play Tupac. It spoke to our anger as teenage boys, man – we could just swear into the open space.”

Swartz calls Shakur a “poet for the people.” In Hanover Park, at least, Hit ‘Em Up is his most celebrated verse. Through it, Swartz says, “Tupac was able to inspire. You can see how hard he actually worked to get away from the exact things he was talking about – I guess, it paid off, but it also killed him.”

In a setting where young people regularly die violently, trying to escape social and financial marginalisation, Shakur’s murder makes him a relatable hero. It is part of the reason that, even 20 years after he died, his music and persona persist as a potent symbol of the hopes and struggles of men and women on the Cape Flats.

*Not his real name.

All images by Dariusz Dziewanski