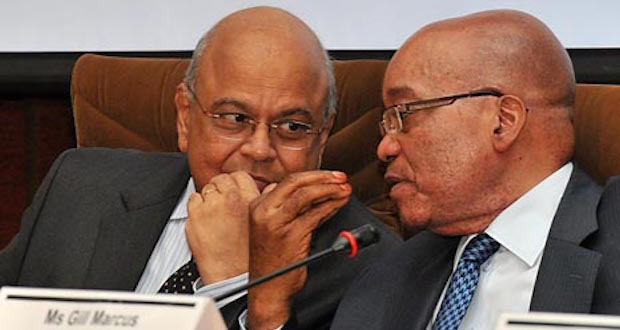 Twitter’s meme game is strong right now. Maybe it’s because the holidays are almost upon us, or maybe it’s just the result of so much recent practice; but on Sunday night, when President Jacob Zuma announced that he was shuffling off his new finance minister for anotherÂ new finance minister (well, actually an old one), Twitter brought the funny. THE DAILY VOX TEAM rounded up seven of the best.

President Jacob Zuma shocked the nation last week when he axed Nhlanhla Nene from the position of finance minister without explanation and replaced him with little-known backbencher David Van Rooyen. The markets tanked and the criticisms rolled in. Four days later, Zuma backtracked and replaced Van Rooyen with former, former finance minister Pravin Gordhan, a respected and trusted figure in the finance world.

People found it really hard to wrap their heads around Van Rooyen’s four-day term as finance minister. He’d only just been sworn in.

And hadn’t even had a full day at the office yet.

It felt like a bit of a joke really.

“Just for the weekend, ne.” pic.twitter.com/xMWSjqtTQ6

In fact, even after reading (and re-reading) the Presidency’s statement, you couldn’t quite escape the feeling that it was all one big prank.

And why, many asked, did these sudden announcements keep cropping up just as South Africans were settling in for the evening?

Gordhan might bring some stability, but still you had to wonder if there might not be another reassignment on the cards.

Given the post’s recent history, you had to ask, does Gordhan really know what he’s getting himself into?

Welcome to your seat, Minister of Finance. pic.twitter.com/MRmJYlQhTb