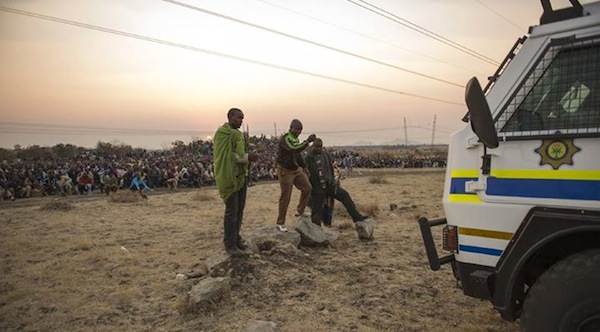 Every country has its pivotal moments, when things change so drastically that we later frame our history in terms of those moments. The Christian world has its BC and AD, the US has its pre-September 11, 2001 and post-September 11. In South Africa we speak about our country either before or after democracy, or before and after apartheid, with April 27, 1994 as the turning point we keep in our minds.

But when the South African Police Services (SAPS) gunned down 34 striking miners on live television at a koppie near Marikana, following a labour dispute with Lonmin platinum mine, many people thought that South Africans would also speak of the country as before and after Marikana. But two years later, with a five-month strike in the platinum sector just ended, itâ€™s clear that little has changed forÂ miners like the ones who died that day.

A total of 44 people died during the labour strike that cold August in Marikana two years ago but miners still do dangerous work for what can barely be considered a living wage, given the living conditions and number of dependents the average miner has.

And the SAPS still resorts to violent tactics to quell public protests as evidenced by the deaths of Andries Tatane and Mido Macia, and the reams of complaints sitting with the IPID. (No less than 485 people died as a result of police action in 2012/2013.)

The politicians involved in the decision-making around the massacre wereÂ redeployed in the most recent cabinet reshuffle. Both the police minister and the mining minister were regarded as having been demoted but still kept in the fold.

And while platinum mines are limping along following a protracted strike by the upstart trade union AMCU, which gained national attention during the Marikana Massacre, theyâ€™ve continued to make profits.

The Farlam Commission of Inquiry, set up to unravel the web of lies and obfuscation around the events of August 16 2012, was meant to conclude its investigation that same year. Two years later, there is no end in sight, and no real indication that anyone in government will take responsibility for what happened that day.

Just this week deputy president Cyril Ramaphosa, testifying about his role in the events leading up to the massacre, proposed that the country should take collective accountability for what transpired there.

This, the spreading of blame to everyone and so no one, is a common thread among South Africaâ€™s previous commissions of inquiry (and there have been several) which have largely failed to do much of anything except give the impression that government has taken a matter seriously.

Itâ€™s hard not to feel a sense of hopelessness in the face of this. Is remembrance all we have to offer the people who were killed at Marikana and their families?

– Image via the Facebook page for Miners Shot Down