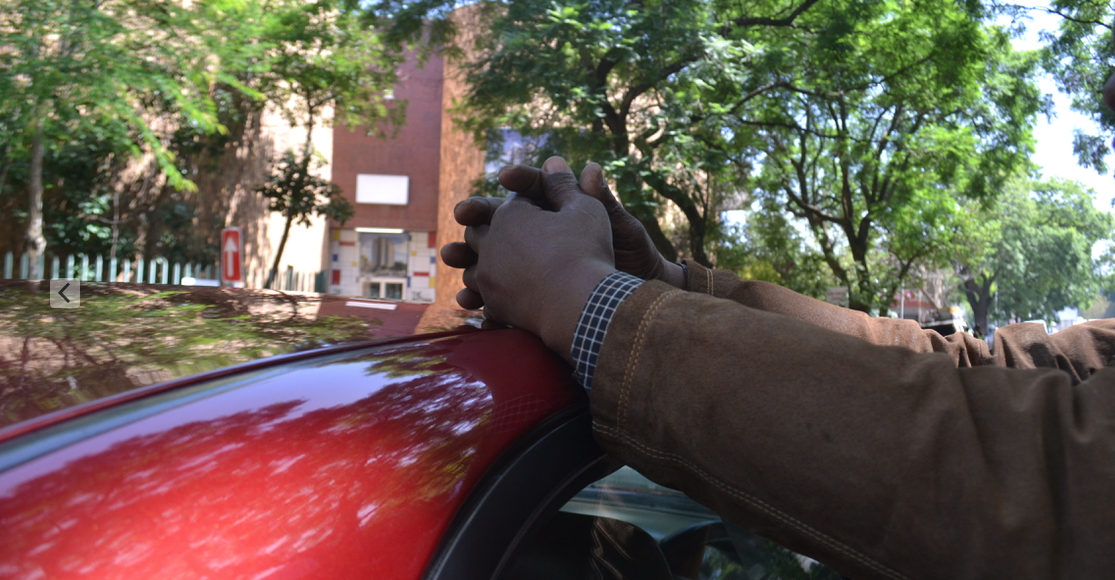 Metered taxi drivers in Johannesburg blockaded the R24 at both entrances to O.R. Tambo International Airport on Friday morning in protest of Uber drivers â€œstealing their businessâ€. Some passengers missed flights, while others took to the streets, walking to the airport. Vincent*
We have a big problem with Uber because anywhere is the world, you cannot just go there and start without being regulated.

We have so many years dealing with metered taxis. So [Uber] just comes from America and charges R10 and we used to charge from R30 upwards locally. If we ask, [the government] says this is competition. What kind of competition is that? They are here to rob us, they are killing our business.

We have lost so much. On a day I sit from early and get no one coming. Itâ€™s already 11:30. Those drivers donâ€™t care; they are foreigners. They are working day and night. The government does not care about us even though they know with these taxis we are sending our children to school.

I have seven children. Now I cannot manage to support them. Itâ€™s bad with Uber, people who own the cars are running other businesses too. I have been driving a taxi for 30 years and since Uber kicked off in South Africa three years ago, I have lost increasingly. Ten years ago I would make between R10 000 and R15 000 a month. Now I only make about R1 000 a week.

The whole world does not like them because they are crooks. We even fought with the so-called Gauteng government; [Ismail] Vadi and [David] Makhura support them. [The government] don’t care about us. They used to come to us to hold meetings, but they donâ€™t anymore.

We used to charge Uber prices but everything is going up every day like bread. Theyâ€™re charging prices we charged 15 years ago. The customers donâ€™t care, they want cheaper things. It doesnâ€™t mean we are expensive. If Uber competes with us and charges R50 while we charge R70, that would be okay. Now they come and say R20.

If the government canâ€™t listen, they will see something.

AB*
Everywhere in the world, there is competition but it must be done in the right way. There are different types of businesses everywhere but this is the transport business, this is a mistake of the government who has not regulated this. The government is supposed to say the prices start at a minimum price. R40, R50 or R60. Whatever you charge from that is up to you. But not less than the agreed base amount. That is the bottom line.

The Uber system is fantastic – in development, we need competition. The only difference where we see fighting is regulation price-wise. If the government asks Uber and metered taxis to sit down and agree on a minimum then we would not have problems.

Everyone is losing to Uber because they are charging the least at expenses of the drivers. All those cars belong to the drivers. When we smash them, we smash our brotherâ€™s car, not Uberâ€™s car. They only have technology. Whatever happens to drivers outside, Uber says they are not responsible.

Uber has a meter, those phones are meters drives according to distance. That meter cannot be fiddled with unlike ours. The meter we use has four tariffs which can be fiddled with. I can look at someone and say they have money and charge them more and they would never know. With Uber, you cannot change prices. Which is one of the reasons people donâ€™t travel with us.

This is a disaster. Anywhere, if something is cheaper, of course, the customer is going to choose the item that is cheaper. We each cope in different ways, we have to organise our own customers. It is very hard to say we are surviving, I am very old. I am 67, who will hire me? I am living hand to mouth. We park and wait for people to come to use and maybe we get a foreigner but that doesnâ€™t mean I am surviving, no. It is very hard. Makhehla*
Uber is taking our jobs. If Uber charges less they take our customers. If I charge the price of Uber I wouldnâ€™t be able to pay for fuel, let alone the maintenance of a car which is so expensive. This is why we hate Uber.

If they increase their price we can work together, but they cannot have it as it is. I have more than 20 years in this business. I was earning about R1 500 a day, today I cannot make even R600.

*Surnames have been removed to protect the identities of the drivers.