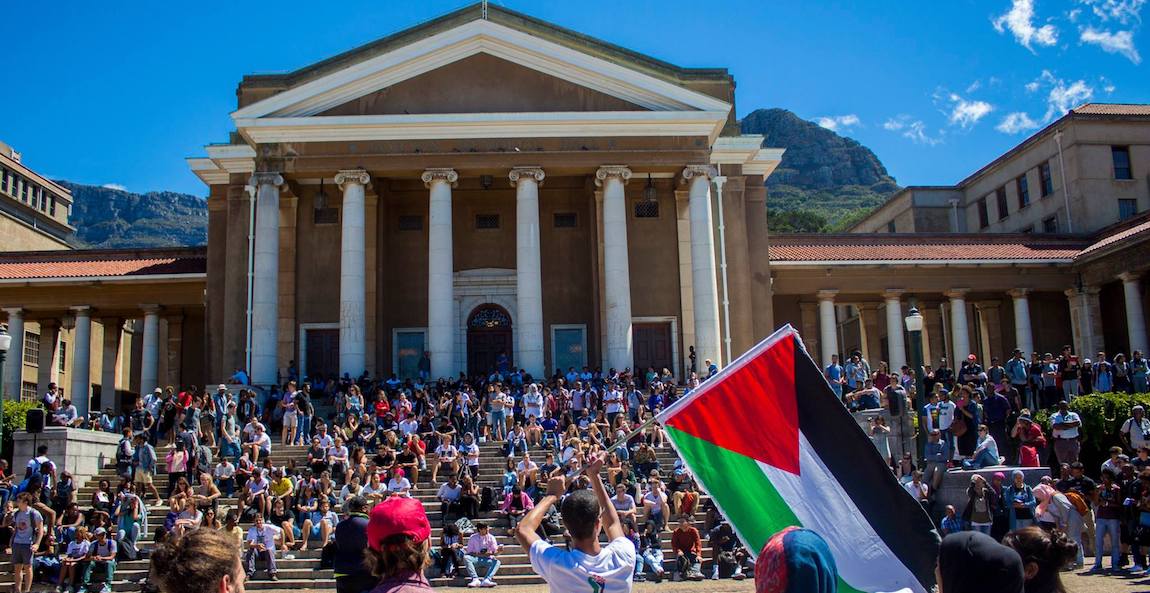 UCT’s Palestine Solidarity Forum explains the place the unjust occupation of Palestine holds in global structures of oppression, and why it is so important for academic institutions to take a stand.

Haunted by the shadow of Rhodesâ€™ statue, rhetorical attempts at facilitating change have become characteristic of the University of Cape Townâ€™s approach to decolonisation. Certainly there have been changes â€“ the conversation is at least occurring. We have made the radical shift from silencing conversations about institutional racism, injustice and coloniality, to acknowledging their existence and then sitting on our hands.

The University of Cape Town claims on its website that â€œUCT is profoundly concerned with transformation in the broader society and with issues of social justice.â€ In reality the default position of the university is not to attempt in its capacity to eradicate injustice, but rather to assume the status-quo and leave the burden of injustice with the oppressed. The persistence of this position has led student-worker protests to increasingly project the monotonous, emotionally exhausted wail of forgotten bodies. Rather than ritualising progress, the university has made it such that protest is ritualised.

The UCT Palestine Solidarity Forum (PSF) is, of course, well acquainted with activism as a ritual. The annual Israeli Apartheid Week produces a space for provocative discourse against the Israeli state and its practices, followed by more hand-sitting. In the same way that there is no substantial institutional response to the question of fees or racism or rape culture at South African universities, there is no institutional response to the sound arguments against Israelâ€™s colonial norms, apartheid policies, and human rights violations. This is so despite clear calls by Palestinians, under the Palestinian Campaign for the Academic and Cultural Boycott of Israel, for universities to take a stand against the unjust occupation of Palestine.

As PSF, in alliance with other progressive student, staff and worker groups, we have initiated a campaign for UCT to adopt a boycott of Israeli institutions. The proposed boycott will either be adopted or rejected by UCTâ€™s Council at a sitting later this year. This boycott requires the severing of institutional ties between UCT and Israeli universities, and applies until such time when Israeli universities end their complicity in the oppression of Palestinians. This complicity extends from illegally evicting Palestinians from their homes in order to build university campuses and dormitories; providing the Israeli army with weapons technology used for maintaining the illegal occupation of Palestine and the siege of Gaza; to developing â€˜ethicalâ€™ doctrines to justify the killing of civilians that the Israeli army regularly points to in order to absolve itself of responsibility for killing yet another innocent child.

Israel is one of the few remaining national settler-colonial projects, and as such is an important site of protest. Its role as an ally of imperialism grants it the privilege to consistently violate international law, and receive absolute impunity from the United Nations. Israeli universities are especially critical targets for boycotts because of their function of ideologically, politically, economically and militarily propping up the Israeli colonial project. In the age of Trump, where the livelihoods of people of colour the world over are increasingly threatened, international opposition against colonialism is critical to building the progressive solidarity and ideological clarity necessary to reshape the world.

But not only is this academic boycott important in the Palestinian struggle, it is an important step for UCT to take itself. At a time when there is university-wide consensus that UCT must commit to a programme of decolonisation, there is a growing understanding that decolonisation cannot simply be an inward-looking process, but must include a response to the global context. Any attempt by UCT to decolonise will fail at the outset if it disregards the systems of oppression in which it is complicit and perpetuates, beyond its campus boundaries of Rondebosch and Mowbray. The UCT academic boycott of Israel cannot be viewed in isolation, but must be seen as part of the broader movement towards decolonising the university.

Of course the UCT Israeli academic boycott is not just a cleansing process for the university; it would obviously be a huge victory in the struggle for Palestinian human rights. Support from South Africa, given its similar history of land dispossession, settler colonialism and apartheid, is particularly symbolically powerful. And as the leading university in the country and on the continent, UCT is in a strategic position to take a moral and principled stand against the atrocities committed by Israel. While not a panacea, the international boycott of apartheid South Africa was critical for exposing it as a pariah state and for building resilience against the apartheid regime. A boycott of any form, whether it is against Israeli universities or on Israeli goods, helps build international solidarity with oppressed Palestinians.

Perhaps the clearest sign of the potential impact of this boycott can be seen by the ongoing attempts by the Zionist Federation (ZF) to undermine the campaign for the academic boycott, and to victimise and intimidate PSF members. The ZF (with strong links to the Israeli government) has followed their predictable formula of releasing several articles in the media, Â and disseminating blatant fabrications instead of contesting the proposed boycott on the ground at UCT.

One of the main fabrications from the ZF is that the Israeli academic boycott will violate academic freedom. This is simply incorrect. Academic freedom as a value applies only to institutions, not individuals. The boycott specifically calls for the severing of institutional ties with Israeli universities, not with individual Israeli academics. More importantly, the use of academic freedom as a justification for the silence towards Israel is an insult to Palestinian academics whose universities are routinely bombed by the Israeli army.

Another fabrication being spread by the ZF is that the UCT academic boycott of Israel is anti-Semitic. We once again reiterate, as we have done almost for time immemorial along with thousands of Jewish comrades, that nothing about an Israeli boycott is anti-Semitic. We are against the illegal occupation of Palestine, settler colonialism and human rights violations – this has nothing to do with Judaism.

UCT has committed to an institutional process examining the merits of the boycott. Discussions by the UCT Academic Freedom Committee are underway, and it is expected to provide a report to Council, advising them on the merits of the case. It is at this stage that public engagement and sustained pressure is important to the cause, and we call on all supporters to attend seminars. The decision by Council is scheduled to take place before the end of the academic year.

UCT has taken several institutional positions on public issues previously, so an Israeli academic boycott would not be an exceptional case. The institutional neutrality so far exhibited by the university with regards to Israel, a settler colonial state, is itself an institutional position. Details for the public engagements on the UCT academic boycott of Israel can be found on PSFâ€™s Facebook page. We encourage all to attend these, rather than following the ZFâ€™s tactic of disseminating lies in articles from afar.