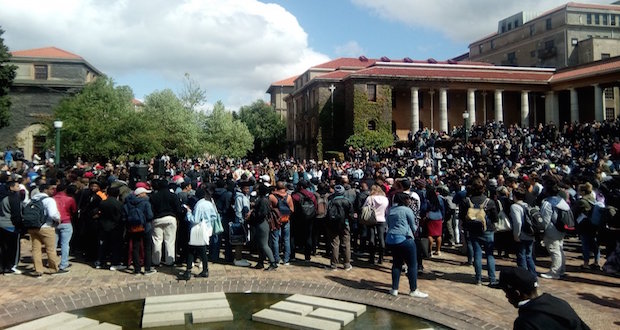 Academic activities were suspended on Friday afternoon at the University of Cape Town as students continued their protests for a #ShackvilleTRC and for charges against suspended student leaders to be lifted. The students occupied the SRC offices on Friday.

On Thursday morning, a group of protesters disrupted the Jammie Bus activities on the Lower Campus of the University of Cape Town before assembling in solidarity with three student leaders facing charges by the university. The group was led by students but also featured a large number of UCT workers who joined the demonstration in solidarity with the students. The protest culminated in a mass meeting on UCT Upper Campus where it was decided that the university should be shutdown until all suspended, expelled and interdicted students are brought back.

UCT there will be no school today. Let’s shut it down until they #BringBackOurCadres pic.twitter.com/1mVJqE5oQV

Earlier on Thursday, students made their way to Belmont Square, Rondebosch where a university tribunal for three student leaders was scheduled to take place.

Will of the people. We’re on the way to Belmont Square, Rondebosch. Police are trying to stop us #BringBackOurCadres pic.twitter.com/cf36KJyfIT

Shackville refers to a protest held at the university earlier this year,Â when students erected a shack on the universityâ€™s Upper Campus to highlight student housing issues. At the time, the Rhodes Must Fall collective described Shackville as â€œa representation of Black dispossession, of those who have been removed from land and dignity by settler colonialism, forced to live in squalorâ€. The university and police dismantled the installation at the time. Thursdayâ€™s scheduled hearings follow the university tribunal of Alex Hotz and Zola Shokane who were both expelled for five years for their own involvement in #Shackville. Mlandu, Maxwele and Hotz are also among the UCT students who have a court interdict against them, barring them from setting foot on UCT premises – though they are appealing the interdict in the Supreme Court of Appeal in Bloemfontein on the 29th of September.

Due to the large presence of protesters at Thursdayâ€™s hearing, and the three students lacking legal representation, the tribunal was postponed. Students then proceeded to Upper Campus where a mass meeting was held.

Speakers emphasised the need to have all students who have been expelled, suspended and interdicted nationally, allowed back onto their campuses. The key point raised by students was for the UCT management to move forward with the #ShackvilleTRC to resolve all issues surrounding what took place during the incident.

Since June 2016, students have been requesting a dialogue with UCT management to internally deal with the violence – from both sides – that surrounded the events of #Shackville. This culminated in a petition for a #ShackvilleTRC as was proposed by activist and UCT student Brian Kamanzi. â€œThe Shackville TRC should be seen, I believe, as an opportunity to turn the page on the events of 2015/16 in a manner that enables us collectively to look forward with more certainty,â€ Kamanzi said.

Following addresses by the protesters, students leading the protest resolved that all operations and activities at UCT will not be allowed to take place on campus until UCT management decides to move forward with #ShackvilleTRC – where a way forward to allow students back onto campus may be found.

UCT denies that the university activities have been suspended for the day, but protestors proceeded to disrupt activites at the UCT Menzies building, UCT computer labs, Leslie Social and then made its way to UCT management building, Bremner.

Dear Max Price & the Bremner Mafia.
You can suspend a few, but you can never suspend the revolution. #UCTShutdown pic.twitter.com/MCrPPjHahf

What weâ€™re now seeing at UCT is students and workers rising up against the exclusions of these activists, insisting that the university will be shut down until all the suspended students are allowed to return. While UCT management insisted on Thursday thatÂ classes are continuing as usual, the university issued a statement suspending classes on Friday afternoon so that it could assess the situation and implement additional security measures.

Authorâ€™s note: The author was also suspended for protest action related to #FeesMustFall in 2015 – though unrelated to Shackville.