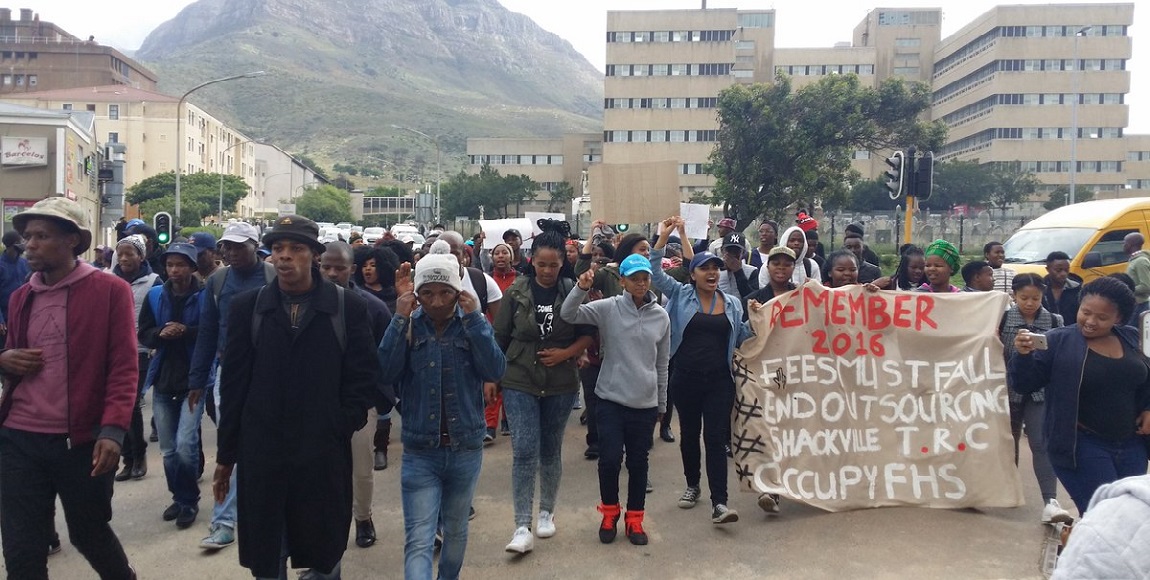 Students at the Cape Peninsula University of Technology (CPUT) Mowbray campus and the University of Cape Town (UCT) marched to Parliament on Wednesday. They demanded that President Jacob Zuma release the Fees Commission report. Parliamentary members – including Zuma – were in Parliament for the release of Finance Minister Malusi Gigabaâ€™s Medium Term Budget Policy Statement.

Students were met with a police presence and two UCT students were arrested outside of Parliament.

In parliament the students of UCT and CPUT are being tailed by the police #uctshutdown #fmf2017 pic.twitter.com/H8W9T3Xepa

Update from parliament. Students pushed back to public park. At least two students from UCT have been arrested #UCTShutdown #FMF2017 pic.twitter.com/xVukg5LCfN

Earlier on Wednesday, UCT insisted it was still open and operational despite student attempts to shut down. Undeterred by the rain and the cold, the UCT student movement marched through the campus singing and disrupting learning activities.

Controversially, UCT students disrupted a test that was being written in the Sports Centre. A protesting student released a fire extinguisher into the venue despite student leadersâ€™ calls to refrain from using the extinguishers.

Last year, a worker at the University of the Witwatersrand died after an asthma attack due to inhalation after protesting students released a fire extinguisher inside a building.

Leadership tells students to not accept the release of fire extinguishers as there are students with asthma who it endangers. #uctshutdown pic.twitter.com/2PAstspWZE

In a statement, the university said it was â€œdeeply concerned about the impact of these disruptions and attempted shutdowns on studentsâ€™ ability to perform academically and for staff to ensure the continuation of the academic programmeâ€. It says it remains committed to continued engagement to resolve issues.

Students held a meeting with management on Tuesday evening. Earlier on Tuesday, students held a mass meeting and marched to the Bremner building to hand over a memorandum of demands to Vice Chancellor Max Price. The university said further demands were named in the Tuesday evening meeting, and management could not immediately respond to them. This included a call for the entire institution to be shut down on Wednesday, and for staff and students to join a march to Parliament. Management said this demand was not feasible and could not be met.

UCT management also deployed the services of a private security company to assist in safeguarding high-risk venues on campus. In a statement, the university was explicit that the unnamed security company was not Vetus Schola, which had previously been deployed on campus but was withdrawn during last yearâ€™s Fees Must Fall protests.