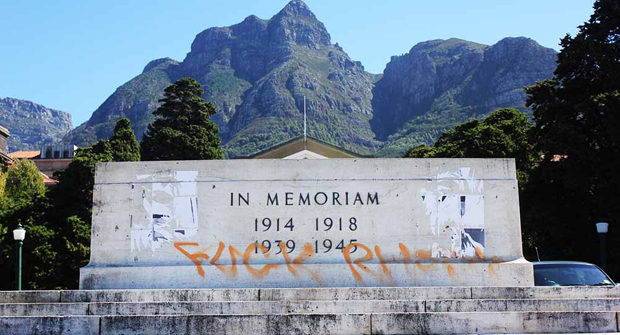 The Rhodes Must Fall movement continues to gain momentum. But, there are still many students at UCT who have not joined the movement â€“ even ones who agree that the Rhodes statue must go. Students outside the movement spoke to RAâ€™EESA PATHER about where they stand on the statue andÂ transformation at the university. Danai Musandu, 21, economics student, Claremont
What they are doing in Azania House [Bremner Building] â€“ where theyâ€™re creating a hub of knowledge so people can come and get more knowledge is â€“ amazing. Us as students [outside the movement], we have our responsibility and our responsibility is to enlighten our friends at the micro level â€“ the protests are macro level. Whether youâ€™re white or black, we need to understand who we are in the system and why we are what we are in the system. The Rhodes Must Fall protests have spurred more curiosity and caused more people to ask questions. If we talk about the statue, weâ€™re losing the plot â€“ itâ€™s not about the statue. Yes, let it come down, but whatâ€™s more important is: so, what after? Nic Summers*, 21, business science student, Rondebosch
The statue should be moved off campus and not be part of UCT. It has a symbol that the university shouldnâ€™t be associated with, because of the colonialist actions. Weâ€™ve all seen the quotes about what heâ€™s said about black people, and we donâ€™t want to be associated with that. You need to shake the system to be noticed these days, and thatâ€™s why thereâ€™s so much talk about it now. Itâ€™s a good thing â€“ people must be aware of the struggle people face and the institutional racism that is on campus. I havenâ€™t joined the movement for two reasons: the first is I have a lot of work right now, and the second is itâ€™s not my fight. This a fight for non-white people and they need to lead the movement. It would go against the movement if a white person was the face of the movement â€“ it would be white arrogance, like the issue would only become legitimate once a white personâ€™s involved and that shouldnâ€™t be the case. The issue is what it is and people need to be aware of it â€“ whether white people are involved or not. Simukai Gwata, 24, actuarial science student, Salt River
The statue should go to a museum, because I want my kids to know about this guy. Even though I donâ€™t support what he did to Africans, itâ€™s a part of our history. The Rhodes Must Fall campaign is not all about the statue. Itâ€™s about the transformation of UCT. I did my undergrad at UKZN and then came here, and Iâ€™ve noticed a huge change from UKZN to UCT. There is racism, but itâ€™s not on the surface. You canâ€™t really see it, but you donâ€™t feel as welcome as how other people feel. I would want to join Rhodes Must Fall, but [my studies come first]â€¦ I want to graduate as much as I want Rhodes to fall. [The movement] might cause a huge separation of race and misunderstanding but when it comes to South Africa, itâ€™s very painful that you go out there and see white people spend a lot of money when black people are struggling. Iâ€™m doing a thesis about demographics in South Africa and I found that white people are 9% of the population in South Africa, but they control more than 80% of the wealth. That is something that should bother us. Cole Noble, 26, sustainable energy engineering student, Rondebosch
Itâ€™s going to fall, and Iâ€™m okay with that, because I understand the sentiment that people have towards a symbol of racial oppression. My only question is: where do you draw the line in trying to remove memories of the past? I donâ€™t feel strongly enough about it to join the movement. Some people who want it to go have really extreme reasons for that, and some of that borders on racism or hatred â€“ just stereotypes towards white people. As a white guy, you get reminded of your past and it feels like youâ€™re carrying this burden of your past and you have a responsibility to do this or that and that you must always apologise for being white. Itâ€™s that feeling that I need to apologise for who I am and my heritage that stops me from joining, even though my mind is open to what theyâ€™re saying. Rama Afullo, 22, entrepreneurship student, Mowbray
A statue of a colonial figure who was also a bigot and racist, I feel that he shouldnâ€™t be represented at the helm of upper campus of the so-called best university in Africa. I donâ€™t believe that he deserves that place. I know that to get things done here you have to be loud, you have to keep going, so I understand why at this point the Rhodes Must Fall movement is the way it is. The problem with joining a movement is that everything that they say, you have to stand behind, even if you donâ€™t agree with it. What I disagree with is that thereâ€™s a militant and communistic approach from a few of the members, and I just donâ€™t have my views on it 100% in line. My personal belief is the statue should be burnt down â€“ at the very least take it off campus.

– All images: By Raâ€™eesa Pather.
– Voxes have been edited for brevity and clarity
* Name has been changed