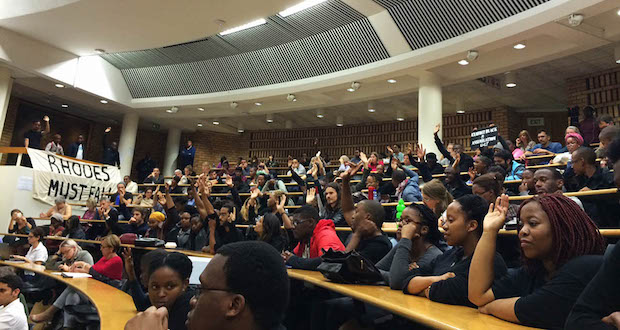 It was the moment when everything fell apart. Ramabina Mahapa, the president of the University of Cape Townâ€™s Student Representative Council, had just led a walkout from a seminar that was meant to unite the SRC and university management in a dialogue about heritage, symbolism, and signage on campus. The students took their protest outside, leaving surprised staff and management behind. Those who remained all seemed to be asking: â€œWhat now?â€ RAâ€™EESA PATHER reports. Mahapa had been scheduled to speak after Sally Titlestad, a heritage consultant. Nick Shepherd from UCTâ€™s Centre of African Studies and historian Owen Kinahan rounded out the panel. But Titlestad never got to speak.

Crain Soudien, the deputy vice-chancellor of transformation and chair of the meeting, was barely halfway through his welcome address when students interrupted him and demanded that Mahapa be allowed to speak first.

Soudien, who balked at the hands that were raised in front of him, consulting the panel and it was agreed that Mahapa could take the lead.

â€œFor too long the narrative of this institution has silenced the voices of the non-white student,â€ Mahapa said, as he read from a prepared speech. â€œSons and daughters of Africa, who are the keepers of your memory, the guardians of your souls?â€

Mahapa concluded his speech, saying that he would not participate in the dialogue, owing to the universityâ€™s refusal to acknowledge the issues students had raised. With a final shout of â€œAmandla!â€ he led students out.

The walkout had been anÂ orchestrated move, designed to show UCTâ€™s management that the students would not engage with them on transformation and heritage until a date has been set for the removal of Rhodesâ€™s statue. Effectively, the SRC and its #RhodesMustFall followers were gatvol. On their way out, the students brushed past vice chancellor Max Price, who stoodÂ rubbing at his forehead until it turned red.Â At theÂ front of the lecture theatre,Â Soudien could only stand and watch as they left.

Once they were gone, SoudienÂ calmly revealed that the university had expected a demonstration from students, but was now unsure of whether or not to continue the seminar. Those who were left in the room were asked to come up with a consensus.

â€œIt would be incredibly disrespectful to a major body of people to attempt to continue right now,â€ said Titlestad.

â€œWe canâ€™t proceed because the very people who we are wanting to engage with have left. It would be sending the signal to students as if they didnâ€™t do what they did here, that weâ€™re not hearing them and weâ€™re not engaging with them,â€ she said.

The seminar was a long time coming. It had been planned last year in order to address issues of transformation on campus. Over the past week, students have saidÂ that the university has not engaged with them on transformation. This dialogue was meant to be a way for the universityÂ toÂ do just that. Except, students were tired of management setting the agenda, and that was the point of the walkout â€“ the SRC wanted to take control.

There is support for their cause from within the university as well.

Smartdryck Abrahams, administrator of union issues, said students weren’t the only ones affected by questions of transformation.

â€œThe staff are just as much affected by this thing. We also feel, from time to time, we donâ€™t get heard. We must not lose focus on the staff, because we stay here, even after some of the students have left,â€ said Abrahams.

â€œThis issue is not about the Rhodes statue, itâ€™s about transformation.â€

As a member of staff who deals with workersâ€™ unions on campus, Abrahams views represent a crucial voice that is missing from the student protests.

The students have beenÂ calling for transformation and black academics from the campus, such as sociology professor Xolela Mangcu,Â have also weighed in on the lack of transformation. The voices of UCT’s legion of support workers, who help keep the campus ticking,Â have so far been absent from the debate. On Monday evening, however, the most notably absent voice from the discussion was Priceâ€™s. It was only when people got up to leave that he spoke – to the media and not students – saying that he and students would not â€œbe so far apart with regard to the final outcomeâ€ forÂ the statue.

â€œI can relate to the students; I can understand them. In my view, Cecil John Rhodes represents colonial history, and represents the oppressor for most people on campus,â€ he said.

Price said that he had been scheduled to meet with Mahapa on Sunday, but the SRC, had told Mahapa to cancel negotiations until a date had been set for the statueâ€™s removal.

From Sundayâ€™s failed meeting, to Mondayâ€™s walkout, the message is clear from the SRC: they wonâ€™t engage until UCT makes a decision to remove the statue and setsÂ a date for the removal.

The studentsâ€™ failure to negotiate and the universityâ€™s inability to account for its lack of transformation have now led to a breakdown in communication.

The University Council is set to meet on 15 April to discuss the statue. Price said the university would electronically collect opinions from the students, staff, alumni and the public before making its decision at the meeting.

But will this be enough for an SRC that has already decided the statue must go?

All images: By Raâ€™eesa Pather.