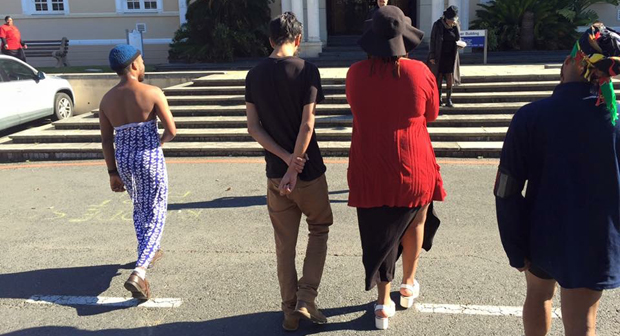 Students in the University of Cape Townâ€™s queer community areÂ demanding the resignation of Zizipho Pae from the Student Representative Council (SRC), after she made alleged homophobic comments on Facebook on Sunday. RAâ€™EESA PATHER reports.

The students have started a group on Facebook called UCT: Queer Revolution, in light of Paeâ€™s comments, where, after the US legalised same-sex marriage in every state,Â she said: â€œWe are institutionalizing and normalizing sin!â€ Pae currently holds the office of vice president, but was acting president at the time she made the statement.

Now the UCT: Queer Revolution Facebook group is sayingÂ that â€œVice President External of UCT’s SRC must resign on account of her queer antagonistic bigotryâ€. On Monday night,Â members of the UCT Trans Collective, which prioritises LBGTIQ rights on campus, lashed out at Pae’s statement with a protest action in the SRC offices. Students in the LGBTIQ appeared topless, demanding Paeâ€™s removal from office.

Thato Pule, a Trans Collective member who resigned her position on the SRC after no disciplinary action was taken against Pae, posted this photo of the protest on Facebook, where the majority of commentators expressed support for the Trans Collective.

â€œBringing sin into the Holy SRC of Zizipho Pae and John Rammutla. She invaded our personal space as queer bodies and now we are invading her,â€ Pule captioned the photo, which has since been removed from Facebook.

On Wednesday, the SRC released a letter Pae had sent to itsÂ president Ramabina Mahapa, after she was given a 24-hour deadline to explain the meaning of her statement, the intentions behind it, and whether or not she would issue an apology.

Pae, a devout Christian, wrote that the message the Bible delivers â€œis about a God â€¦ who forgives sin and extends mercy to all peopleâ€. She added that scriptures in the New Testament â€œrefer to homosexuality as sinâ€.

â€œI do believe that this, in the context of a God of race, who forgives sin, can never constitute as condemnation, hate speech or homophobia,â€ Pae wrote.

The UCT: Queer Revolution Facebook page published a response to Paeâ€™s letter, criticising her for addressing Mahapa and not the queer community, for referring to queerness as a lifestyle choice, and for making antagonistic remarks in her capacity as a student representative.

The group also criticised Paeâ€™s comments about the New Testament, saying: â€œInternalising this belief that our very existence is a sin is deeply hurtful, harmful and violent.â€

On Thursday afternoon, a handful of members and supporters of the Queer Revolution again picketed outside UCT’s administrative Bremner Building and demanded that management remove Pae from the SRC.

The SRC’s investigation of Pae is ongoing and it is yet toÂ determine whetherÂ any official disciplinary action will be taken against her.