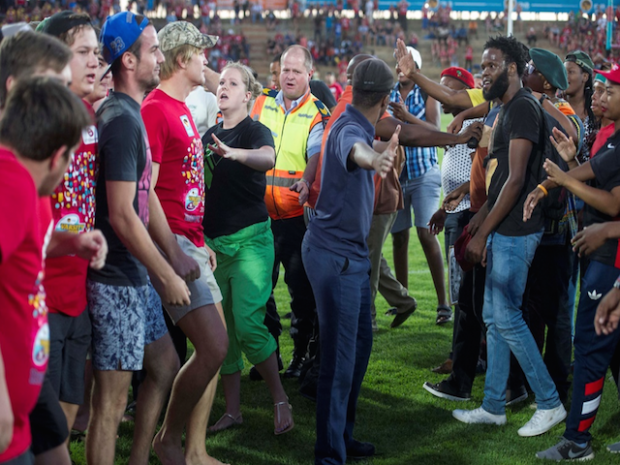 On Monday afternoon a group of protesters allegedly interrupted a rugby game at the University of Free State in a bid to draw attention to the plight of outsourced cleaners at the university. Rugby players and supporters went on to assault the protesters, resulting in clashes that later spread to the hostels and lasted all evening. According to witnesses, black students were specifically targeted under the watchful gaze of security and later the police. ANGELICO VANTO, a second year student in Corporate Marketing at UFS, spoke to The Daily Vox.

I was in my residence when the trouble started. I wasn’t at the rugby match. I have seen the video, but I can’t tell you details of what happened there. All I know is that it started at the rugby, and then moved to the SRC buildings. The police were at the building and people heard gun shots and windows breaking. Then the commotion reached the hostels area and that’s when I went down.

They [the police and the white students] were specifically targeting black students. The students threw stones at the protesters from their windows and when the black students retaliated, the police shot rubber bullets.

One of my friends was shot in the face with a rubber bullet. I was shocked at what I saw. I saw a police officer throw a girl to the floor. I saw three guys beat up a friend of mine in front of me – kicking him on the floor.

The black students were being punished for defending themselves. You know, people talk about the racism here. I have white friends. And I didn’t think it was so bad, until today when I saw that white students actually beat up black students for protesting and interrupting a rugby match. I saw a white man throw a black woman to the ground.

Some of the protestors who were beaten during their disruption of the Shimlas #VarsityCup match at #UFS pic.twitter.com/9UAq97ylYf

The SRC says they are going to protest tomorrow at 7am. I think I will go, but I am not sure.
I wouldn’t say that I am scared right now.But let’s just say that I am going to stay indoors because I would rather not go out. You never know what could happen.

And about Jonathan Jansen (vice-chancellor) we tried to get hold of him. But we didn’t get through to him. We were told things were under control but I don’t think they are. You could say many students are very unhappy with him right now.

It is really sad that we have to go through this after our parents and grandparents fought for freedom. People think racism doesn’t exist, or that it they can hide it under the rug. But it exists as we have seen.