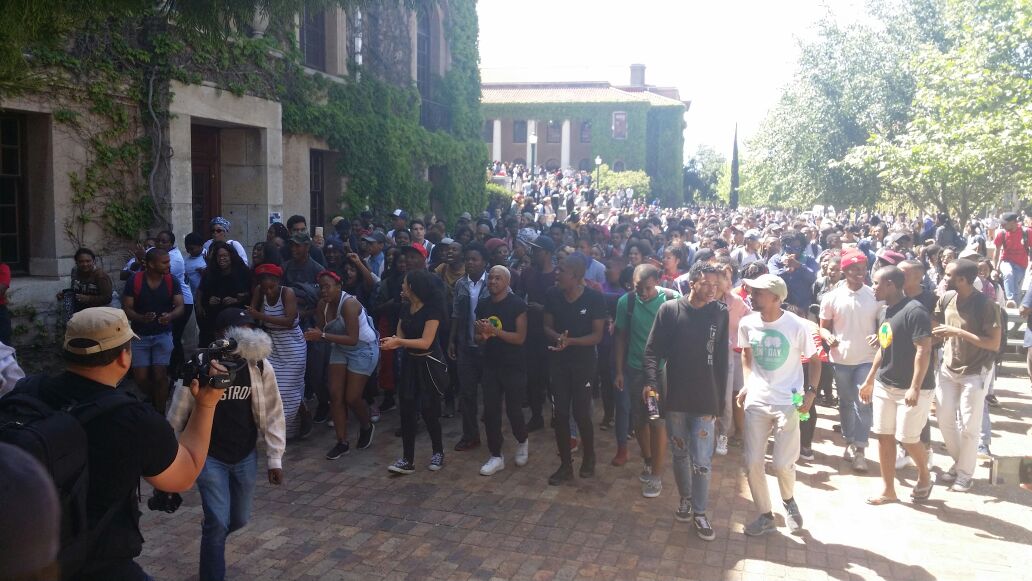 #FeesMustFall protests continued at the University of the Free State (UFS), University of Cape Town (UCT), and Cape Peninsula University of Technology (CPUT). While issues of private security stayed at the forefront at UFS and CPUT, UCT management applied for an interdict. The Daily Vox team rounds up.

A private security company operating on the Qwaqwa campus has been suspended on suspicion of using live ammunition against students. The UFS spokesperson Lacea Loader told News24 that the incident is being investigated. â€œOne of the two students, who was injured and hospitalised the evening of October 22 on the Qwaqwa Campus during an incident between students, security officers, and members of the South African Police Service (SAPS) when a firearm was allegedly released, has been discharged.â€ The incident took place on Sunday and police were investigating.Â

The university maintains that exams will continue on all campuses despite ongoing protests.

On Thursday, the University of Cape Town went into a third day of the #FeesMustFall shutdown. The university announced that it was cancelling face-to-face classes for Thursday and Friday. The university also applied for an interdict to prevent â€œany personsâ€ from disrupting classes or any university services.

Students mobilised through the campus, shutting down exams and tests.

Student held a mass meeting in the afternoon where they discussed managementâ€™s response to their demands.

Vice-chancellor Max Price has said the university cannot reduce fees in the absence of state funding. Students called for more mental health support, for UCT to put pressure on CPUT to demilitarise. There were also calls for the movement to recognise the struggles of queer students.

Students are due to conduct a â€œtourâ€ of the campus at 5pm.

Acting vice-chancellor, Dr Chris Nhlapo addressed the media on Thursday morning about the current situation on the CPUT campus.

#cputshutdown vice chancellor Nhlapo: it has been a time of â€œunprecedented crisisâ€ at CPUT pic.twitter.com/ad0EmnMMdr

Nhlapo said protests started in July when workers raised concerns about insourcing and that arson attacks started on the campuses in September.

CPUT has been criticised for the extreme use of private security. On the â€œmilitarisationâ€ of the campus, Nhlapo said that private security is there to protect the students and any allegations of abuse by security would be taken seriously.

#CPUTShutDown Nhlapo: I am reluctant to say this is “militarisation” – we are just providing security under our own guidelines. @TeamNews24

Nhlapo ended for the press conference saying CPUT did not want to make any announcement about the fees increase as that would cause protest. He said because the university does not have the fees report, management is unable to plan.

#CPUTShutDown We would have loved to have the Fees report yesterday. The longer it is delayed, the less we are able to plan. @TeamNews24