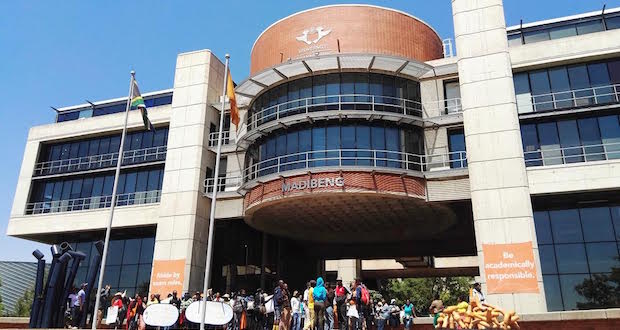 Another week, another educational institution burns to ashes. On Sunday night, the Sanlam Auditorium at the University of Johannesburg (UJ) Kingsway Campus was burnt down. This follows a trend of sorts – two weeks of schools being burnt down in Vuwani, Limpopo, and a building at the Vaal University of Technology being set alight as well.

According to a statement issued by the university, the costs of the damage amount to over R100 million. Vice Chancellor Ihron Rensburg confirmed that the auditorium had been broken into and fire-bombed, and damage had also been done to the computer labs above the auditorium. He vowed that the perpetrators would be found and jailed.

â€œWe will do everything within our power and in cooperation with the authorities to follow important leads, find them, prosecute them, and send them to prison for as long as possibleâ€, said Rensburg.

The universityâ€™s security services are working with police and reviewing CCTV footage to try and identify the suspects involved. Fortunately, no one was injured in the blaze as it happened in the early hours of Monday morning.

#UJ: Warrant Officer Billing addresses the media on the #UJFire where the Sanlam Auditorium has been burned down. pic.twitter.com/Y3F2NbcbDk

According to Lindokuhle Xulu, a member of UJ Fees Must Fall, students believe that the only way to be heard is by burning down buildings. â€œSo there is a possibility that students have resorted in burning because they cannot engage with the universityâ€.

Xulu suggested that there might be two possible instigators of the fire. â€œThere are two possibilities – it can be the bouncers because they want to remain in the university; the second possibility is that you have 12 students who are suspended.â€ Earlier in May, a student was arrested for protesting in solidarity with 12 students who had been suspended for disrupting SRC elections. The Fees Must Fall movement says that UJ represses student protests at every instance. The university has confirmed that the disciplinary proceedings against those 12 students will proceed this week as planned.

UJâ€™s EFF Student Command have released a statement condemning the arson and calling for the bouncers hired by the university to be removed immediately. They claim that the university spends R18 million on the increased security, which fails to keep students and staff safe. They also vowed to continue fighting to have the 12 suspended students reinstated.

How do fees fall,when so much money has to go to repairing these damages. Education is under siege.#UJFire #Vuwani https://t.co/eaTEroBT2j

With the recent upsurge of buildings being set alight in protests, the question must be asked: is the burning of institutions a dangerous new trend, or the only resort of protestors to have their voices heard?