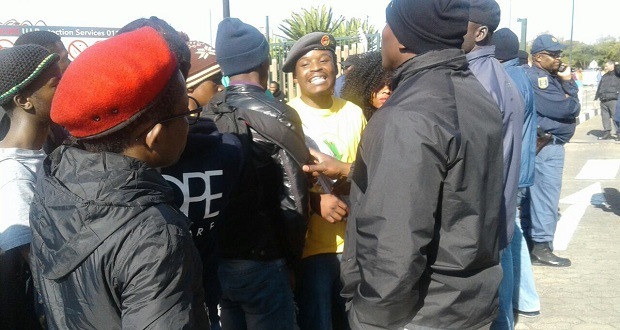 A student at the University of Johannesburg was arrested on Monday evening as he tried to board a taxi to go home after ongoing protests at the university. Aaisha Dadi Patel spoke to UJ Fees Must Fall movement member HIBIST KASSA about the incident and how protest action is being repressed on campus.

The arrested student is set to appear in the Johannesburg Magistrateâ€™s Court on Tuesday morning. It is not yet clear what he is charged with, according to a statement released by the UJ Fees Must Fall movement.

â€œWe had a protest in solidarity with twelve students who had been suspended by UJ. They were suspended for being part of a prayer session for a student who died at Doornfontein Campus. This was an asthmatic student who had an asthma attack on the tenth floor of his building, and lifts were not working. Emergency services only got there 50 minutes later, and he had already died. The protest was also against the fact that the university is spending R2 billion every month on bouncers and extra security measures on campus, and not really investing in facilities or books or transport. There is a shortage of transportation on the campus and there have been a lot of problems with regards to that,â€ says Hibist Kassa, a PhD candidate at UJ and a member of the Fees Must Fall movement there.

The students suspended at the prayer were suspended on the basis that they had not asked for permission, that the gathering was illegal, and they were being videotaped. Kassa says that the students have been charged but haven’t yet had a hearing. â€œThey were supposed to have one yesterday but it was postponed indefinitely. They have not been told when they are going to reschedule a hearing and it’s been ongoing for three weeks. These students don’t have access to campus and they’ve been thrown out of res.â€

According to Kassa, the university is working very hard to cut off protest action. â€œOn Monday during the protest, the suspended students were outside the gate. Other students in support of them were inside the campus. Police came onto campus, intimidating students, and we had a few students who just decided to sit on the floor in an open area and the police insisted that they should leave. Outside the gate, bouncers attacked the students again. Last year we had a detailed report put together by Professor Jane Duncan which detailed the level of repression at UJ and stated that UJ’s protest laws are actually unconstitutional so the challenge is internal in UJ’s senate.â€

Kassa says that the university represses all forms of protest, and students were stifled from having any solidarity action in light of the #RUReferenceList protests. â€œWhile we were thinking of how we could also protest against rape culture, we couldn’t even have internal conversations because of the degree of repression,â€ says Kassa. â€œWe were so afraid that even when we were putting together our posters, people felt the need to have management approve our posters and ask permission for whether we can remove our clothes or not. When you try to raise these issues, people are genuinely afraid of being suspended.â€

â€œThere’s no accountability and we’ve seen it. On Monday again, students were attacked and harassed by the bouncers.â€

The university released a statement late on Tuesday afternoon. It said that academic activity had not been disrupted by the “noisy” protest involving just over 25 students on Monday. It confirmed that a student had been arrested for damaging and destroying property and engaging in violent behaviour. The university will continue to engage with the police and to strengthen its own security as a precautionary measure, and confirmed that it “responds robustly to the disruptive and destructive behaviour by a few people”.

Regarding the 12 suspended students, disciplinary hearings for are scheduled for them this week. They were accused of interfering with SRC elections, destroying access control equipment, burning mattresses at a student residence and participating in an unlawful protest at Wits.

â€œUJ has consistently created the space and devoted the time of its most senior staff to engaging the real issues facing its students. But the University has equally consistently made it clear that there is no room, under any circumstances, for destructive and disruptive behaviour,â€ said acting Vice-Chancellor, Jaco van Schoor in the statement.