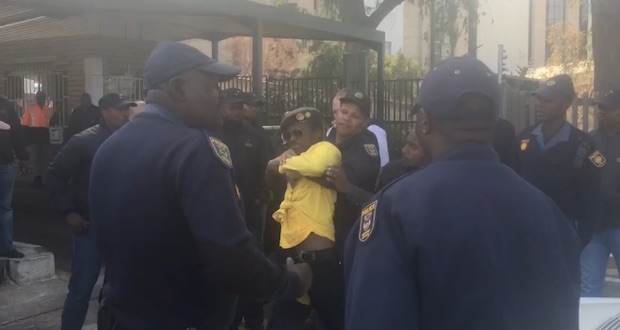 On Monday, 8 August a small crowd of UJ students gathered at the universityâ€™s entrance 2 in protest against the suspension of 17 students (#UJ17) who are alleged to have been responsible for the fire-bombing of UJâ€™s Sanlam auditorium in May this year. A dozen or so police and university security personnel were also present at the protest to guard the entrance to UJ – where a brawl between protesters and a few students eventually took place.

In a media briefing, the current SRC president of UJ Auckland Park Campus, Rethabile Ntshinga, said that the suspensions were unfounded as there was no evidence and that most of the 17 were not present or had any incentive to torch the auditorium. He went on to state that he believed the 17 were targeted as they were active on campus as mobilisers for #FeesMustFall.

â€œWe deem this as an attempt by the university management to silence student leaders and student activists. We see it as an attempt, at a time when the plight for free quality education is coming, for the university to continue to victimise students,â€ said Ntshinga.

Ntshinga claims that the university had not even provided even preliminary evidence for the case, and that although the Hawks had investigated, nothing tangible had yet come out of it.

SRC President says the suspension of the 17 without evidence is an attempt to silence activists #UJ17 @thedailyvox pic.twitter.com/jM34MMduRZ

In UJâ€™s public statement,Â the university ensured the public that a formal investigation was underway and that the relevant students identified as being involved in the incident, would not be allowed on campus pending the disiplinary hearings and criminal investigation.

UJ argues that availing the evidence against the suspended students to the public may jeopardise the criminal proceedings and thus they will not be releasing it.

â€œThe University is nevertheless mindful of its responsibility not to prejudice the Stateâ€™s criminal case and hence it will not be prudent to make detailed information about the evidence in its possession, public,â€ said UJ in its statement.

In response to this, some students have commented that it is unethical to suspend students prior to them being found guilty and that it results in exercising its will over activists without real accountability.

So is it guilty until proven otherwise? this is all too familiar. @siyanda_Star https://t.co/ltSVHVeU5f

Following the media briefing, Xhamla Songwevu, secretary if the YCL and member of the PYA of UJ, gave a speech to the protesters expressing the injustice of UJ remaining open while the 17 were still suspended on unfair grounds.

â€œIt cannot be that the South African Police Services are here deployed to protect one gate. One gate that forbids them the liberation of allowing their children from being able to access campus,â€ said Songwevu.

Students think it is a great injustice that the university remains open, while #UJ17 remain suspended @thedailyvox pic.twitter.com/CYtjl02JJB

Songwevu and a few other students then proceeded to attempt to block cars from entering the university in a non-violent manner while singing. There were a few scuffles with the police, which eventually resulted in most of the protesters dispersing, except for Songwevu. He was eventually forcefully overcome by a large number of police and private security. This resulted in a violent altercation between Songwevu and most of the officials.

Serious fight breaks out with one student vs a dozen or so police officers and security guards #UJ17 @thedailyvox pic.twitter.com/KVGtPQfE1A

After the brawl had subsided, with the security personnel subduing Songwevu, many of the other protesters were vividly upset at the way he had been treated. Tensions remained high, but no other physical altercations took place.

Songwevu explained to The Daily Vox that he was one of the 17 and thus fully understood the severity of the suspensions for students – who, for many, were in a desperate position as they only had their degrees to aid themselves and their families. He said the incident with the police was to be expected, as it was as a result of the natural dynamic between revolutionaries and police officers.

Interview with Xhamla Songwevu , one of the #UJ17, following his incident with the police and security personnel. pic.twitter.com/8XAQdoDyei

Protesters slowly dispersed from UJ as the day proceeded.