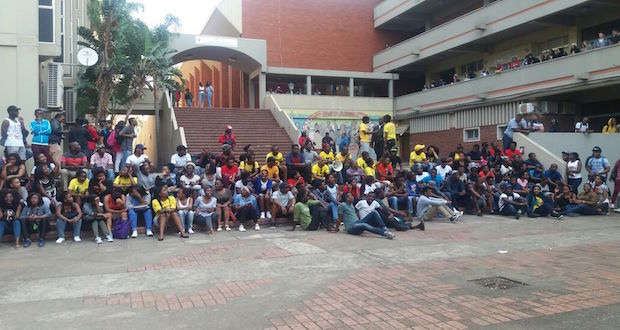 Academic activities at the University of Kwazulu Natal (UKZN) have been suspended since Monday, and campuses will remain closed until 29 August. This decision came as a result of a meeting between management and students, as UKZN student, Kuhle Sithole, told The Daily Vox that it was agreed that all campuses need to be shut down to avoidÂ protests turning violent.

Sithole said that there has been infighting between political factions at the university. “There has been some tension between the Progressive Youth Alliance, Sasco, Young Communist League and the ANC Youth League, which is what resulted in the unnecessary disruptions,â€ said Sithole.Â She said that each of these student organisations wanted to own the narrative of the protest and it was some of these feuds that resulted in stabbings last week. â€œThat is why some students were arrested,â€ she added. “Sasco is fighting against YCL and the ANC Youth League. All parties fall under the Progressive Youth Alliance.”

The president of Sasco, Nesh Khumalo, told The Daily Vox that it is in fact management that is divided.Â The SRC and management met on Thursday, but he said that they failed to find a solution to the standoff. Khumalo says that university management is highly divided as well, which makes it difficult for both parties to find a solution. Some of the management supports the SRCâ€™s call while the other half doesnâ€™t, said Khumalo.

â€œOn Monday we met with the university management to give feedback on potential fee increases. We understand that if the government proposes an increment, it will be adopted by our university even though they are telling us not to worry.Â We managed to remove the security company Mi7 from our university campus. We will be waiting for more feedback from management until the 31st of August where we hope to be addressed,” said Sithole.

According to SRC member, Philani Ntshobeni, one of the issues that students have raised is the fact that the vice chancellor proposed his own commission that is meant to deal with the issue of students who had been arrested next year. It was management that was supposed to deal with this, and the students had proposed that the cases be dropped. Ntshobeni says that students don’t want to deal with this year’s issues until last year’s issues have been resolved. Ntshobeni also claims that decisions are being made by the management and forwarded to the council without the SRC knowing, and the SRC wants their central president to be able to sit in on those meetings to stay up to date with what’s happening in management.

Andiswa Goba, a 20-year-old student from Umlazi, sympathises with the students’ cause and is using the free time to catch up with work. “The suspension of academic activities is a destruction but at the same time, it helps us to catch up on the workload that we have. I am on a bursary but I still feel for those who are having financial issues. The fact that they are protesting is right, it’s the time frame that I am not convinced by. It’s close to the end of the year so when academic activities resume, there will be more workload,” she said,