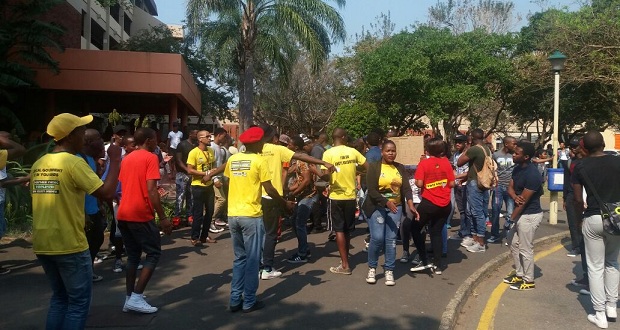 By Monday morning, five University of KwaZulu-Natal UKZN) campuses had been closed by university management after discussions with the SRC.

Nesh Khumalo, the UKZN South African Students Congress (Sasco) president, told The Daily Vox that students will be meeting with management on Monday to discuss their demands. But whether the shutdown will continue depends on the students.

â€œWe will be negotiating today and then tomorrow we will call a mass meeting to report back to students. Then it is them that are going to advise us on whether we should continue,â€ said Khumalo.

In this meeting, they will be requesting a 0% fee increment, up until the Fees Commission concludes its duties. They will also be speaking about NSFAS issues, asking that it be decentralised.

â€œIn fact what we are saying, is that the online communicating is okay, but now we need offices on our campuses or regional offices,â€ said Khumalo.

He also said that they are striving to keep their protests peaceful going forward. The South African Union of Students (SAUS) president was due to address students today, but this has been rescheduled to tomorrow.

As for the two students who were arrested at the Pietermaritzburg campus, Khumalo said that the students have been released on bail and are due to appear in court on charges of public violence.

Last week, UKZN students shut down the Westville campus after the Progressive Youth Alliance (PYA) and SAUS called for a national shutdown.

At the Durban University of Technology (DUT), the EFF Student Command (EFFSC) have called for a shutdown of the university on Monday, because they claim that the SRC elections have not been free and fair.

In a Facebook statement, the EFFSCÂ claimed that on Saturday, when there were two boxes left to be counted from ML Sultan Campus containing 653 votes, the IEC decided to change the counting system. EFFSC rejected this change and as a result were kicked out of the counting venue by private security.

They also claimed that after the counting system had changed, Sasco won the elections with the votes from the ML Sultan campus. They said that the numbers donâ€™t add up, that some of the Sasco candidates had less than 800 votes before the counting of the two boxes, but after the counting, they all went above 1500 votes.

The statement claimed that on Saturday, IEC members told them that they had been robbed of ballots while their observers were out of the counting venue. Late on Saturday night, those ballot papers appeared outside the Steve Biko campus clinic, and had been marked with votes for the EFFSC.

As a result, they called for a shut down of the Steve Biko campus on Monday and are demanding a repeat of the elections.