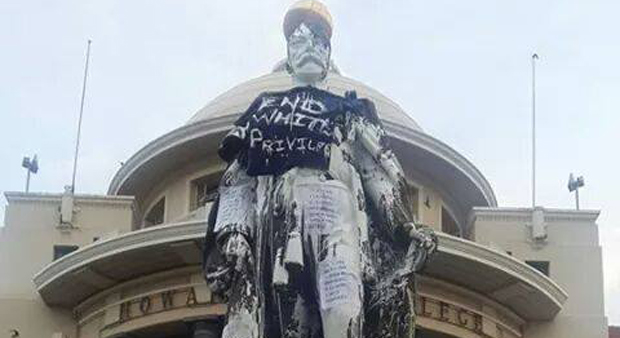 Protests against tributes to colonialists have spread from Cape Town and Grahamstown now to Durban. On Thursday morning, students at the University of KwaZulu-Natal, Howard College campus, woke up to find that a statue of King George V had been defaced.

Ntokozo Sboh Qwabe posted a picture of the statue on her Facebook wall, and the post was soon flooded with comments â€“ many of them approving.

Whoah! Students at the University of KwaZulu-Natal have joined the Rhodes Will Fall movement in the most fitting way!…

However, not everyone supported the action.

When The Daily Vox Team spoke to students at University of KwaZulu-Natal about the statue Â yesterday, they didnâ€™t seem too fazed by George Vâ€™s toweringÂ presence at their institution. First-year student Sithembile Mahaya however said she would like more statues of struggle heroes on campus, as they symbolise what we went through as a country. â€œKing George V does not symbolise that,â€ she noted.

When contacted for comment, UKZN media-relations officer Indumathie Moodley said the university isÂ aware of what has happened and that a statement will be released soon.

Meanwhile, the University of Cape Town (UCT), where the movement began, has agreed to take down theÂ statue of Cecil John Rhodes. Reports say that UCT is awaiting approval from the Department of Arts and Culture before going ahead with the removal.