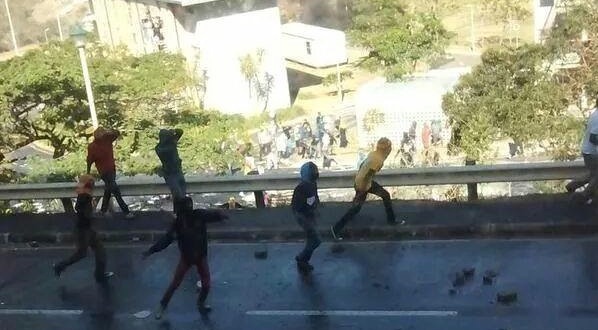 After the recent violent strikes at the University of KwaZulu Natal (UKZN), SHIMEI GANESH asks why studentâ€™s canâ€™t exercise their right to freedom of expression in a more diplomatic way. Resistance is sometimes necessary to ensure a collective message is heard. Every South African citizen has a Constitutional right to express their concerns freely. But could we â€“ the agents of progress in the future of South Africa â€“ exercise this right in a more diplomatic manner?

Students at UKZN protested violently after hearing that registration fees could increase to R9,000 in 2015 and that the closing date for registration date would be set to 6 February 2015.

The university later said that the rumours that the registration deposit will increase by R6,000 or R9,000 in 2015 were false.

But it was too late. By that point 200 individuals had already embarked on an illegal protest at the Westville Campus, disrupting lectures, stoning vehicles and setting facilities alight. Some protestors obstructed the main entrance with burning tyres and two people were arrested by police.

Even those who werenâ€™t in favour of violent protest were swept up in the actions of the few.

From one postponed test to another, students were concerned about how their academic progress would be affected. From one teargassed lecture hall to the next, they feared for their safety. It is not uncommon for students to be bullied out of lecture rooms, sworn at and intimidated if they choose not to join the protest; nor is it anything out of the ordinary for windows to be broken, furniture to be set alight, or for students packed into lecture theatres to be overwhelmed by the presence of teargas.

Many students who were no less dissatisfied with the proposed increase in registration fees than those setting fire to campus property, were disturbed by the senselessness and violence of the protests.

â€œI understand the need to express [our] opinions, but I wish we could do so without being so destructive,â€ said one student, who while in agreement with the strike agenda, disagreed with the protestors methods.

The SRC mirrored these sentiments in a communique that was sent out to fellow students, stating that it â€œcondemn[s] any form of violence and vandalism by police or anyone elseâ€.

Lawelessness â€“ achieved through the vehicles of violence and vandalism â€“ seems to serve as a central component of most university strikes. (And there have been many â€“ six in the last three years alone, and four in the three years before that.)

Students need to stand together when those in power make demands that cannot be accommodated. But violence cannot be the only tool in our protest kit.