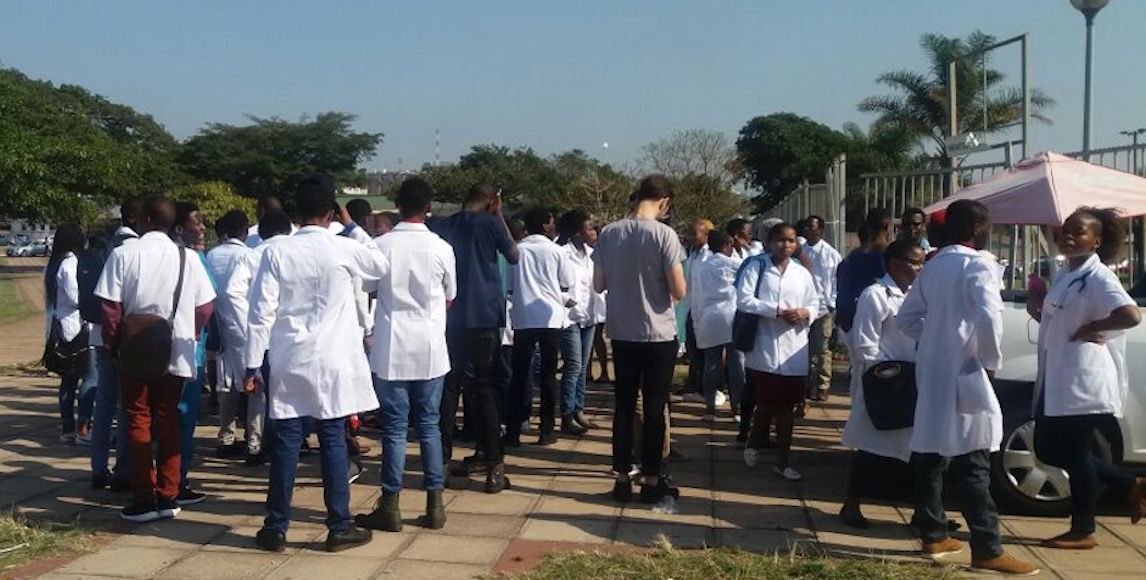 On Friday, nearly 100 University of KwaZulu-Natal (UKZN) medical school students flocked to the Durban magistrates court in support of two students who were arrested and charged with public violence on Thursday.

Mnqobi Mthembu and Sakhile Magadla were arrested following a clash between students and police at a protest at UKZNâ€™s Nelson R Mandela School of Medicine and later released on a bail of R500 each. The duo appeared in court earlier on Friday but their matter was adjourned until September 11.

The protest, which entered its fifth day on Friday, was prompted by students demanding the release of a KPMG report into the allegations of fraud and corruption at the institution and their objection to the decentralisation programme, which places students in rural areas for clinical training.

The medical school student representative council (MSRC) said that students were protesting peacefully until police fired at them.

â€œWe were unarmed and did not cause any violence but police still shot at us and arrested our students for absolutely nothing. They said that they were arrested for public violation but we still donâ€™t understand what it is that they did,â€ it said.

The lawyer representing the two students, Ayanda Mkhwanazi, confirmed that the two are facing charges of public violence.

â€œThe case has been adjourned as the state is still going to do further investigation. For now they have been charged with public violence until the state concludes its investigation, we are still waiting to see if there wonâ€™t be any added charges,â€ he said.

MSRC president, Nkosinathi Ndebele, said that the protest will not end until their demands are met.

â€œWe are going back to the management to negotiate. Yesterday they told us they were ready to negotiate but the meeting could not sit as a result of how the protest panned out,â€ he said.

He added that university management â€œis trying to shift the focus with this case but the students are clear on what they want so we will go back to them, but we want to make sure that our students are safe throughout the whole process.â€

The university said that academic activities at the medical school are suspended until further notice.

Meanwhile, UKZNâ€™s Westville Campus has also suspended academic activities due to a protest this morning.

**NOTICE**
Academic activities have been suspended on the Westville campus today (4 August 2017) pic.twitter.com/fb83MMri30