Home Slider UKZN workers on outsourcing: “My dignity as a human being is reduced...
WhatsApp
Facebook
Twitter
Email
Print 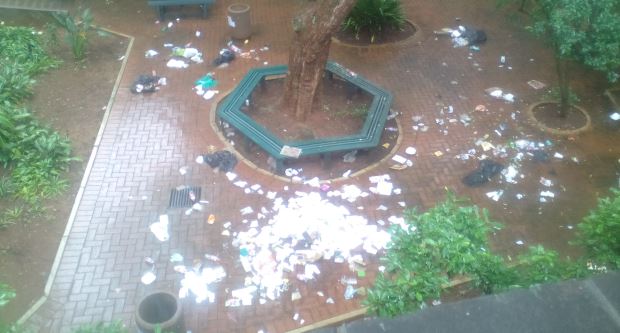 Tired of obliging to what they feel is injustice, the cleaning and security staff from the University of KwaZulu Natal Howard College have downed tools in a weeklong strike against outsourcing. The workers feel that while company bosses sign lucrative contracts from the institution every year, their share is not enough to get by. As most of them do not have any kind of education and qualifications, their jobs are all they can hang on to. They spoke to QINISO MBILI. Thandazile Mnguni, 46, cleaner, Folweni, earns R1, 700
I have been a cleaner for 18 years at this institution, under various contractors. I want outsourcing to end. This salary is literally nothing, my mother and three children all depend on me. Two of my children are in school and the school is very far from home. I canâ€™t afford to pay for their transport costs everyday so they walk and only take the taxi under special circumstances. If I were to pay for their monthly travel, this would cost me R1, 200. My own transport to work equates to R650 per month. I also have to pay R600 rent at the end of every month. As we speak, I am in debt because last month I had to pay school fees, buy stationery and school uniforms for the children, on top of all the standard monthly expenses. My currently unemployed son matriculated in 2013 and has never found a stable job. Were it not for outsourcing, he would have got into UKZN easily just like every other child of a UKZN employee. Commando Ntjontjwane, 53, cleaner, Mayville, earns R1, 700
I have four dependants living with me; I also try to send at least R100 to my parents every month back home in Transkei. I pay a total of R1, 200 in school fees every year. For transport to work I have to spend R400 monthly, this R1, 700 that they give us is much less than enough. Some months I canâ€™t even afford to buy groceries; my dignity as a human being is reduced to nothing. When this little money we call a salary arrives every month, it all goes away to cover debts I have made within the previous month. I started working as a cleaner in 2008 and have been earning the same salary ever since; there is no way for one to develop as a human being. My salary is not the only reason I want outsourcing to end; these companies also exploit people. I was employed as a cleaner in the company, but we end up moving furniture sometimes and working overtime without pay. I want outsourcing to end so I can support my family back in Transkei and to at least be able to buy decent clothes for my children. Thembo Mdabe, 49, cleaner, Folweni, earns R1700
I have five dependants;Â my husband works as a construction worker and makes things a bit easier for us. My children are in high school and the oldest matriculated last year and is unemployed. The reason I am in this fight against outsourcing is that I know that, had I been employed by UKZN, it would have been easier for my daughter and my other children in high school to gain access into the university. My family is proud of me for standing up for my rights, I will not back down until our grievances are acknowledged and acted upon. It is a shame to be asking for money from other people while you are known to be working. Nomthi Mkhungo, 41, cleaner, uMlazi, earns R2, 150
I live in a shack with my three children; two of them are in high school and one in primary. I pay a total of R500 in transport costs. With other workers in my company, we protested last year February against these low wages and they were very quick to acknowledge our grievances and we returned back to work. To our surprise, when that month ended, our salary was raised only by R1. I want my children to end up here at UKZN just like the other children I see here every day. As it stands, I donâ€™t know what I am going to do this month end because we will not get paid for all the days that we did not work. We have only worked nine days this month; one can only imagine what peanuts we are going to get this month. Sphamandla Lungwana, 23, landscaping/maintenance worker, Mayville, earns R2, 200
I matriculated in 2014 and I live with my two children in a shack. My six-year-old first born is in grade 1 and I spend R250 for his monthly transport costs. I have to cough up a further R400 for my own transport fare. The tiny and shabby shack in which I live in is not mine so I pay R300 rent every month. This job is very hard, it requires a lot of physical strength and the money they give us does not match. When the companies changed last year, my salary decreased and I had to understand, I had no choice. It was embarrassing last December to go back home in the Eastern Cape because they knew that I had gone to Durban in the big city to work, yet I had returned as broke as I was when I had left. If you are poor, your life is undermined and your self esteem taken away from you. As a matriculant, people always ask me why I donâ€™t just drop this job and go look for a proper job. I have done that and as a parent, you can’t just drop a job because when the month ends you will have people looking right at you expecting you to give them their daily plate of food. Ziningi Machi, 48, Mayville, cleaner, earns R2, 100
I have five dependants, one of them has matriculated last year but is still unemployed. Amongst my other monthly expenses, I spend R800 for the childrenâ€™s transport fares, R700 rent and R400 transport for my own self. This is not to mention groceries and toiletries that I have to have every month. One of my four children is in matric this year; his school had withheld his grade 11 report because I had not been able to pay for his school fees. I had to go and borrow money from a loan shark so that I could pay the school in order for my son to advance to matric. This meant that my three other childrenâ€™s school fees could not be paid up for the beginning of the year; I had to choose between buying stationery and paying up their school fees. For the school uniform, we depend on donations each and every year. I borrowed R1, 000 from the loan shark and this has an interest of R250 per month. He will have a right to come and take anything from my house if three months have passed without me paying back the money. From the look of things, I will not be able to pay back this money anytime soon. I am prepared to fight this till the end this time I will not be exploited any further.

Read also: The workers’ protest at UKZN is being met with force

Voxes have been edited for brevity and clarity.
Featured image by Qiniso Mbili