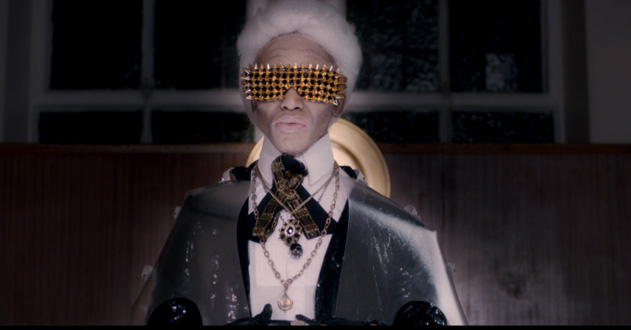 Performance artist Umlilo, formerly known as Siya the Anarchist, is a new name among South Africaâ€™s emerging new-wave artists.Â  Although heâ€™s only been around since 2013, the Johannesburg-born musician is already gaining momentum for his outspoken defence of the LGBTIQ community, of which he is a member, and his critique of South African youth culture as money-obsessed and scarred by gangsterism.

In the video for his latest song â€œChain Gangâ€, the self-proclaimed â€œfuture kwaaiâ€ artist shares a morbid view of the social ills that South Africaâ€™s youth face today.

â€œWe have so many people of color getting gunned down,â€ Umlilo told Vice in a recent interview. â€œAlso in South Africa we have a huge problem with the corrective rape of lesbians and the list goes on and on. These crimes show us just how cheap the lives of black people and LGBTs are.â€

In the â€œChain Gangâ€ music video, Umliloâ€™s performance alter-ego Rita knows sheâ€™s going to die. At 27 years old sheâ€™s ripe to join the young rock stars who have passed away before her. But if youâ€™re going to attend her funeral, then thereâ€™s one thing you should know: the dress code is strictly fall/winter. Anything less just wonâ€™t do.

Donning a Karl Largerfeld get-up, Umlilo watches as his alter-ego prepares for her funeral. Rita was the â€œmeanest, bad gang-bangerâ€ around, and her yearning to get to the top, make all the money she could, and constantly be in the limelight finally killed her.

â€œ[The song is about the] obsession with money that essentially keeps up all in this endless cycle of oppression. Itâ€™s all a chain effect and weâ€™re all part of this chain gang,â€ Umlilo says.

In the video, Rita and her friends are chained to their superficiality. Their obsession with wealth and being the coolest, trendiest people in the room overshadows the emotions and tragedy of the funeral â€“ theyâ€™d rather be seen in clothes and brands that are to die for. Ultimately, theirs is the gang of materialism.

â€œThe concept of Chain Gang was inspired by the current state of youth culture in South Africa. I wanted to explore the â€˜scene kidsâ€™ and play with the notion of a church that the young and hip would attend, a dark portrayal of a place of worship where deities are replaced with fashion designers, labels, shoes, and gold. I wanted to imagine what would happen if these scene kids had to attend a funeral, and express the idea that for the youth very few things carry meaning anymore,â€ the videoâ€™s director Katy Carson told Vice.