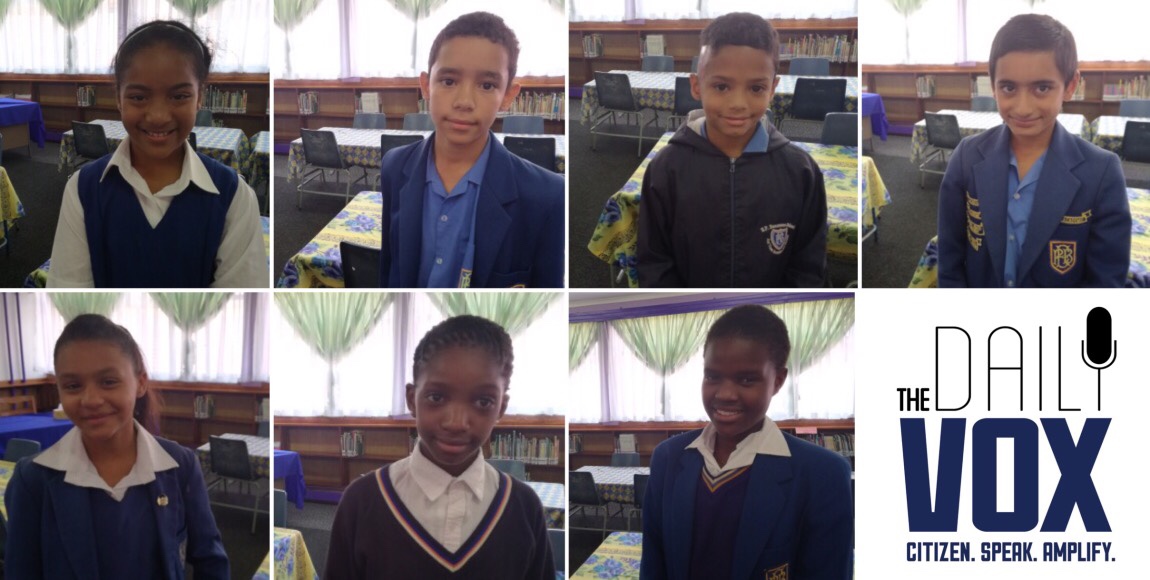 Struggle stalwart, Ahmed Kathrada visited E.P. Baumann Primary School in 2015 and his impact was lasting. The kids were awed by his impact in the struggle, his relationship with Nelson Mandela and the time he spent in prison. The Daily Vox team spoke to some schoolkids about meeting Ahmed Kathrada, and the impact he had on their lives.

Who was Ahmed Kathrada?

He was a dearly good friend to Nelson Mandela, they met up in prison because they both fought for freedom in apartheid. – Laaiâ€™qah Bhula, 9

He went to Robben Island for quite a few years but before that he went to another prison. Well, I donâ€™t know that prison name. I forgot it. – Brayden Tobias, 11

How was Ahmed Kathrada as a person?

I firstly thought he was going to be a very fancy person who comes in a limousine and all of those things. When we actually met him, we figured he was very humble and olden style. – Hamza Danka, 12

When I was in grade four, I met up with him and I was very shy. I didnâ€™t know much about him. I sat and listened to what he had to say I was like really, heâ€™s a good guy and I would love to be like that. – Thando Gama, 12

What did Ahmed Kathrada talk to you about?

He spoke about a lot of things that happened when he was fighting against apartheid. He was Nelson Mandelaâ€™s best friend and he worked with people like Mohamed Yusuf Dadoo and the Cachalia brothers. – Sabeenah Maxongo, 12

He was telling us how life was in the past and how we should appreciate how we can have free education. [He said we must] persevere and become better people and stuff like that. – Hamza Danka, 12

I asked him how did it feel when Nelson Mandela passed away. He said it was a bad thing, because he [Nelson Mandela] was a dearly good friend to him. He was looking at the ground when he was explaining because I think he felt like a bit of a twitch in his heart in explaining this. – Laaiâ€™qah Bhula, 9

What can you learn from Ahmed Kathrada?

I think we can learn that sometimes itâ€™s better to help other people, even if you donâ€™t know them. – Jordan Tobias, 12

When he spoke, he really inspired us and told us all about when he went to Robben Island and how life was inside. He was a really nice person, a really friendly person. – Shihaam Beckett, 12

If you see Ahmed Kathrada and you talk to him, heâ€™s a guy that you really want to look up to because of what he did for the youth, for the country and against racism.Â He inspires the youth to be better, to focus. He inspires us that no matter how hard life is, you can just work hard and get what you need. – Thando Gama, 12

Heâ€™s a very big inspiration to me. [I learned that] I should help elders and all the older people I meet. Me and my cousin went out to help older people, but we never succeeded. We went to the poor people and gave them some food, we helped some old people cross the road. Some of them were quite rude to us but we accepted it. – Brayden Tobias, 11

Whatâ€™s the most interesting thing about Kathrada?

At the age of 17 he left school. Wow, I would never do that – sacrifice my education for others. But then he did it so heâ€™s really tough and brave. – Thando Gama, 12

How did Uncle Kathy impact on South Africa?

He actually worked with Nelson Mandela and they combined the foundations and created an anti-racism foundation which has done a lot of work. They go to places and if the racism there is really bad where people canâ€™t stand each other just because of race, they go there and fix up the matter if they can. Lives are changing. – Thando Gama, 12