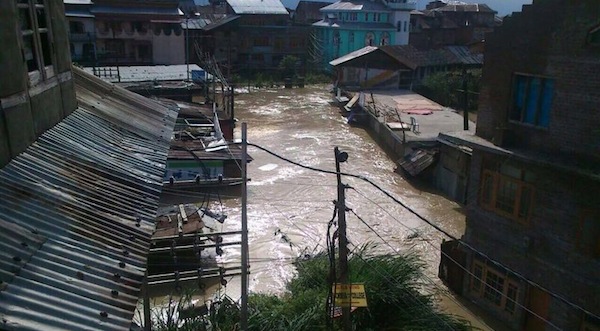 The 2014 floods may have receded from our consciousness, but for the people of Kashmir, the devastating effects remain. RIFFAT MOHIDIN spoke to some of those affected about the obstacles they face in trying to rebuild their homes â€“ and lives.

Srinagar, Kashmir: Four months may have passed since the rivers burst their banks and submerged Kashmir into a deluge not seen for 100 years, but for Gulshan Begum, the nightmare has yet to end. The floods of 2014 tore her life apart.

Forty-five-year-old Gulshan lost her home. She also also lost her son Mohammad Musaib, who drowned tragically when a flimsy rescue boat capsized in the neighbour’s compound.

The mother of two boys lived in Mandir Bagh â€“ a congested locality in the interiors of Srinagar. In September 2014, when the Jehlum river, which snakes its way through Kashmir valley like a serpent, broke its banks, the waters took down houses, property and lives.

Gulshan described the river as behaving â€œmadlyâ€. She says when she sought refuge at a familyâ€™s home, she knew she wouldnâ€™t see her own home again.

â€œI knew my house would not be able to resist,â€ Gulshan said, sobbing as she recalled the events.

â€œEvery house can be rebuilt in years but not those which the waters took away; I have a hole in my heart for my son to whom I didnâ€™t pay a complete farewell,â€ she said, while standing near the site where her house stood before the flood.

The floods that struck administered Kashmir and Pakistan uprooted hundreds of thousands of people. At one point 600,000 people found themselves on the street. In Kashmir more than 250 people died. In Pakistan, the death toll reached almost 280. The initial assessment report prepared by the state government, which gave a break-up of the destruction, said that 83,044 concrete houses had been fully damaged and 96,089 had been partially damaged by the disaster.

Within two weeks, damage to the region was estimated at $1bn. A summer had been shoved into sludge.

Like tens of thousands, Gulshan has been rendered homeless by floods. She was paid Rs 150,000 ($3,000) by the state government as a compensation for her sonâ€™s death.

Three kilometres away from Gulshanâ€™s house is Jawahar Nagar, a residential neighbourhood in the heart of Srinagar city and considered ground-zero of the devastation. Here the houses are in shambles, empty and locked. Most shops are closed and businesses are being repaired.

Jawahar Nagar and its adjoining Raj Bagh, Wazir Bagh and Gogji Bagh neighbourhoods saw the worst of floodâ€™s fury as water rose to an unprecedented level, creating depths of 20 to 25 feet and remaining inside homes for more than a month. The people of these localities, like many others in different areas of Srinagar city, had little time to save their property or their life savings. They are still awaiting relief packages.

In Jawahar Nagar, 122 houses collapsed and 102 houses were severely damaged, forcing residents to relocate. People with decades-old homes were now forced to rent a room in another locale. Some, like Jabeena Gulzar, have shifted to Jammu. Others, like Gulzar Ahmad Khan, whose modest tailoring business is his livelihood, have to clean up and rebuild their lives. He hasnâ€™t earned an income for four months.

â€œSince the floods I havenâ€™t had any work. The government didnâ€™t consider the losses of small people like us. We are still waiting,â€ he said.

The neighbourhood is a shadow of its former, bustling self. With broken structures, rubble and dust piling up upon the streets, it is a scene out of a war. Here, people amble around for intact bricks, to help rebuild homes someplace else.

But Kashmir is in the middle of a harsh winter. And residents are battling to keep their composure amid the bitter cold. Sahil Ahmad says the winter took away their chance to mourn. Riffat Mohidin is a journalist with Indian Express, based in Srinagar.

– For more images of people affected by the Kashmir floods, see our previous photo story.