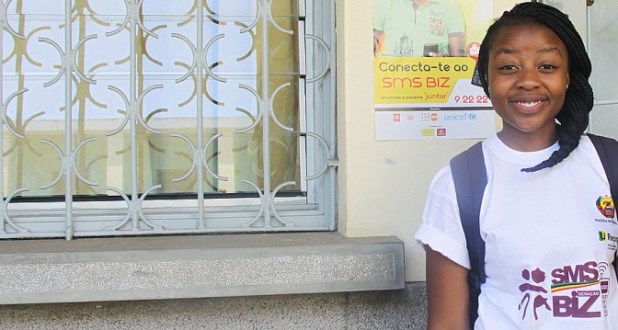 What better way to reach young people in a tech-heavy world than through their cellphones? The United Nations Children’s Fund (Unicef) has partnered with a line of government ministries in Mozambique to launch a youth-led SMS service that offers counselling on sexual and reproductive health and HIV prevention for adolescents.

â€œI would wake up wet and I didnâ€™t know why that happened. I thought I was sick and had a disease of some sort,â€ said 20-year-old Soares Mutambe. He is one of the many young people in sub-Saharan Africa who do not have comprehensive knowledge about HIV/AIDS and reproductive health.

These young people have become the driving force behind the Unicefâ€™s SMS BizÂ initiative using the U-Report platform, a social monitoring system of free SMS that promotes participation and counselling of young people and adolescents on sexual and reproductive health and HIV/AIDS.

According to UNICEF, ownership of cellphones by young people has never been so high, and will continue to increase independently to income and education levels. Cellphones have the potential to foster open dialogue on issues of sexuality, reproductive health and HIV prevention. Adolescents and young people want more information as they explore their sexuality, they want individualised channels that would respect their privacy, and they want to be at the centre of the response to their challenges.

In Mozambique, Unicef partnered with government and youth association, Coalizao to adapt the SMS-based U-Report and roll out a pilot programme in four provinces.

SMS Biz was designed to help adolescents and young people to express the problems they face in the community and assist in the consolidation of responses to these problems. The platformâ€™s objective is to promote counselling of adolescents and young people aged between 10 and 24 about their sexual and reproductive health and HIV prevention. A counselling hub is managed by 12 young counsellors, equipped with ICT facilities and guidelines to respond to queries relating to HIV, gender-based violence, alcohol and drug abuse, as well as other issues.

â€œWe currently have 36,428 young people registered users on the system since its launch in October 2015. Our plan is to reach 50,000 adolescents and young people by the end of 2016 in the four provinces that the programme is currently running,â€ said SMS Biz manager Francelino Murela.

He added that the confidentiality provided to young people using the SMS service is key in reaching young people because privacy is important to them â€œMost of the information given is available at local clinics but young people are scared to go to clinics because they donâ€™t want to be seen by their family relatives. Stigma and discrimination are real challenges for young people,â€ Murela said.

Additionally, the SMS service helps Unicef and the government gain knowledge about what issues need to be addressed. Several adolescents and young people engaged in peer discussions have expressed gratitude for having been reached by the initiative, particularly those in the rural areas who are further away from health services.

â€œI couldnâ€™t talk to my uncle about it so I sent an SMS to the counselling hub to ask why I was waking up wet. They responded and explained that wet dreams were part of boys growing up,â€ said Mutambe as he casually gazed at its peers. Mutambe doesnâ€™t make any eye contact as he shares the discussion he and his friends have about sex, girls and reproductive health. â€œWe talk about these things often but Iâ€™ve come to realise that most of the information Iâ€™ve received from my friends was misleading and were actually myths that theyâ€™ve heard. I do share the information I get from SMS Biz with them but sometimes they discredit it because it comes from me and Iâ€™m a virgin,â€ Mutambe said.

Being a 20-year-old virgin is challenging for Mutambe, who has opted to spend much of his time in church and abide by its teachings. He is teased and pressured frequently by his peers to engage in sexual activities and has no one to give him the detailed information about sex and girls as he is too shy to approach his uncle.

â€œI would talk to my friends about sex and reproductive health because of the communication gap between my parents and I. My friends are constantly bragging about having sex with multiple girls and make fun of me for being a virgin. Iâ€™ve been told that Iâ€™m late and that Iâ€™m a weak guy,â€ said Chiloveque with his eyes locked to the computer screen and fingers clinging onto the keyboard. He casually jokes about the wheels turning for his friends, who now talk to him and ask him for advice since he began working at the counselling hub. Young women have higher odds of HIV infection due to various factors, including sex with older men, not living together with a sexual partner, not attending school and having multiple partners. Additionally, not knowing oneâ€™s HIV status and engaging in high-risk practices predisposes young people to the risk of contracting HIV.