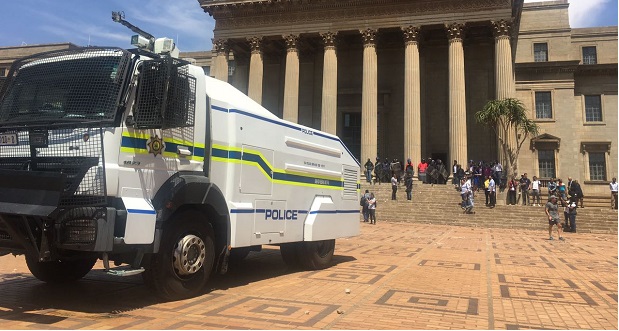 On Monday, universities that had previously been closed were expected to resume academic activity. However, Monday saw all sorts of mayhem. From rock throwing, fires, and the overturning of a security vehicle to plenty of teargas, stun grenades and rubber bullets. This is how Fees Must Fall played out on Monday.

At the Howard campus, the academic programme was suspended after management expressed concern over â€œvolatilityâ€ on the campus.

SUSPENSION OF THE ACADEMIC PROGRAMME ON THE HOWARD COLLEGE CAMPUS pic.twitter.com/HPykcWt0el

This came after police allegedly fired rubber bullets at protesting students earlier in the day.

After the academic programme was suspended, students continued to sing and mobilise on campus.

There was a face off between protesters and police, where University Risk Managementâ€š SAPS and Public Order Policing fired rubber bullets and stun grenades to disperse students who threw stones at security officials.

It is also reported that toilets were set alight and an Mi7 security vehicle was overturned.

In an email to the students, spokesperson Lesiba Seshoka warned students against unlawful protest action, emphasising that action will be taken against any students that contravene the high court interdict.

University of the Witwatersrand

There was a heavy police presence at Wits on Monday morning, after management of the university confirmed that the academic programme would resume.

Students began singing and mobilising from the Medical School and Education campuses, marching to the Main Campus in Braamfontein. Although protesters then moved around campus, classes still resumed.

Dramatic scenes played out after 12pm when students attempted to enter the Great Hall and were held off by private security. They began throwing stones at the security guards and were dispersed with rubber bullets and stun grenades. Police tried to bring in water cannons but they were blocked by protesters who made a human shield.

A heavy police and private security presence remained on Wits, and also followed protesters out into the streets of Braamfontein. The university released a statement confirming that two students were arrested.

Students black the road so the Police Nyala can’t come past. #wits pic.twitter.com/PpWQjoTmLK

Protesters also set a bus alight after unsuccessfully trying to overturn it.

It was reported that a priest was shot with a rubber bullet at close range as he stood with his hands up in front of the Holy Trinity Church in Braamfontein.

The pastor has been shot in the face pic.twitter.com/kZggrLZAzK

The academic programme resumed on Monday morning at UCKAR, as a group began disrupting lectures. Initially small, the group grew to about 100 people.

Protesters flooded some of the main venues by letting the taps run in the bathrooms and plugging the sinks with toilet paper. They then mobilised more students in a social area of the university. Soon after, police came onto campus in full riot gear, and protesters went into the Steve Biko Union, where they sang. A group of about six students broke away to disrupt a lecture that was happening in another building, and police reportedly followed them and arrested them.

At UFS, classes wereÂ disrupted by protest action. The academic programme reconvened on Monday after a week-long recess, with increased private security presence. Students began shutting down campus early on Monday morning, Â with reports that police threw teargas into a test venue, injuring some students who were inside.

According to UFS student Thomas Kolathu, students were peaceful when they were arrested. He says that the tally of arrested students is up to 30. The arrested students have been taken to the Parkweg Police Station but he was told that they will not be released on Monday.

Kolathu tells The Daily Vox SAPS had been dispersing crowds with teargas and then targeting student leaders and arresting them. Among those apprehended are SRC members and the head of Sasco. Any student who had been addressing the masses was targeted by SAPS.

The situation at UFS remains tense. Some classes had resumed despite protest action. It is unclear whether the plans to resume the academic programme will change for Tuesday.

The 12 students that were suspended for their involvement in previousÂ Fees Must Fall protest action are currently on a hunger strike. Their hunger strike is to highlight the injustices they feel about being suspended without a hearing.

Students had been mobilising on campus and someÂ lectures were disrupted.

Most faculties cancelled lectures for the remainder of the day after a group of protesting students and workers moved through campus shutting down buildings. The library was also closed.

According to campus updates, â€œsome lectures have been disrupted, fire extinguishers sprayed and a few doors have been broken.â€ Stun grenades were used to disperse protesting students.

Classes are expected to resume as usual on Tuesday.

UP has cancelled the structured engagements around free education that were supposed to take place on Monday.

This was following disruptions by the Fees Must Fall group on Monday morning.

Engagements with the staff were scheduled to begin at 8am on Monday morning. There were also departmental talks and an address by the Vice Chancellor scheduled for later in the day. However, things went awry when students arrived first and began blocking the entrance to the meeting venue. The University of Pretoria Fees Must Fall (UPFMF) say they do not want fractured and splintered engagement. They are calling for an all inclusive mass meeting. According to Vice Chancellor Cheryl de la Rey, the purpose of the engagements was to record and hear the various perspectives on the call for free higher education. â€œWe aim to have firm resolutions in place on Monday regarding the dialogue on free higher education so that we are able to resume classes as soon as possible,â€ she said in a written message to parents regarding the engagements for Monday.

Lebo Modise, a student fromÂ the Fees Must Fall collective, says that the two-week recess was a delaying tactic and the structure of the planned engagement was not what UPFMF had asked for.

â€œWe had engaged the university three weeks ago. We handed in a memorandum to the VC with a set of prerequisites and engagements that we ought to have with the university. We had given her 24 hours to respond to avoid situation we are seeing today. We said call a university assembly, let council/ senate, students and staff be there. She [De la Rey] failed to honour that commitment,â€ he said.

UPFMF had also called for all suspensions to be lifted, the university to pledge support for free quality decolonised education now and for the campus to be demilitarised.

Although private security and police were on standby, they did not interfere with the protest or attempt to stop it.

Juan du Preez, a student supporting the Take Back Tuks initiative, says he expected the engagements to be disrupted. â€œI expected people to disrupt meetings but I expected there to be peace. I expected us to come to some sort of solution. We expected that [management cancelling the meetings] because thatâ€™s what theyâ€™ve been doing all along. What else can they do? If thereâ€™s protests and theyâ€™re disrupting the meetings anyway, then why continue them?â€

Take Back Tuks refers to the group of students at UP who want to go back to class.

Following the disruptions, UP locked all entrances and did not allow anyone on campus.

As it stands, the engagements with the VC and staff have been indefinitely postponed.

Marisa Joubert, a student who had been participating in the engagements before they had been disrupted, says she is on the University managementâ€™s side. â€œManagement is trying their best. They organised a meeting for us to discuss free education. How can you expect management to make the decisions they need to make if you keep disrupting them?â€

It is unclear whether academic activity will resume on Tuesday, however the University remains committed to seeing the academic year through.

At a meeting between the vice chancellor and academic staff on Monday afternoon, it was decided that faculty-based discussions would take place on Tuesday – without students – to try and decide on a way forward for the resumption of academic activities. Students are likely to be unhappy with being left out of decision-making processes and protests are set to continue.

On Monday, the charges on the UP24 wereÂ dropped. The UP24 are the 24 students who protested against Afrikaans as a medium of instruction in the #AfrikaansMustFall protests at the beginning of the year. The students had been released on bail pending a court appearance that was scheduled for Monday.