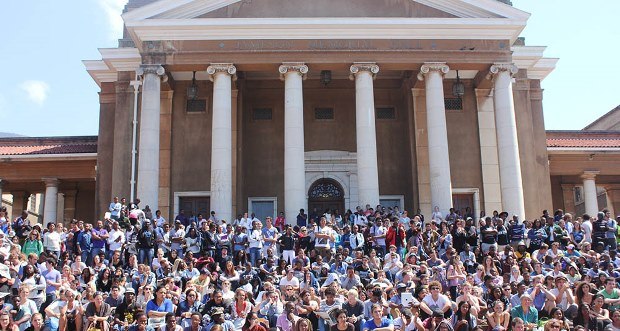 At the end of my last piece on UCTâ€™s absurd and discriminatory reasoning used to justify disinviting journalist Flemming Rose from giving this year’s TB Davie memorial lecture, I left open the question of what UCTâ€™s executive councilâ€™s intentions were in scapegoating the Muslim community. The following has been uncovered since:

1. Deputy Vice-Chancellor Francis Peterson has admitted that UCTâ€™s management had no tangible evidence of violence being planned, had Rose’s lectureÂ taken place.

â€œThere were no specific threats. What we had done is looked at the level of protest from both staff and students over the last year, weâ€™ve looked at where the level of tolerance was amongst different constituencies. We also have had various consultations with leaders of the Muslim community but also leaders in the university and society in general. And it was based on those that we have made the assessment that there may be violence, â€œ Peterson told The Daily Vox.

During an interview with Voice of the Cape community radio station, Peterson was also asked to respond to the widely expressed sentiment that Priceâ€™s letter painted aspects of Muslim community as violently intolerant. Peterson assured that it was an â€œunintended and unfortunate consequenceâ€.

2. Peterson reassured that Max Priceâ€™s letter was not intended to offend or discriminate against any group.

The entirety of Priceâ€™s second point might be a good place to start on this. Like where Price describes the extremist threats in the Middle East and then directly proceeds to warn against possible intolerant violence creating security risks?

3. Strong sentiments came out of the consultation with UCT’s council, with disagreements about the rationale behind disinviting Rose.

One of the primary points of contention was the justification for rescinding the invite. UCT SRC president and council member, Rorisang Moseli, expressed that he and many other council members believed the issue to be one of a principled stance of who one did and did not see fit to represent UCTâ€™s values when speaking on academic freedom.

â€œMany of us fought with Max Price at the executive council and council meetings. We argued that this was a principled issue, not one of security â€“ security was not of primary concern. I think because Max is very much a freedom of expression/academic freedom purist, he didnâ€™t want to explicitly say, â€˜This person doesnâ€™t equal our valuesâ€™. He wanted to sit on the fence of arguing about risk assessment and having consulted others as being the defence for the disinvite.â€ said Rorisang

@michaelcardo @kenanmalik piece is more of a rant than a considered argument. Full of bile, short on logic. & asking the wrong questions?

This was ironically the opposite of what Price claimed would be achieved by rescinding the vote.

5. Cardo, infamous on Twitter as a self-appointed defender of white liberals, male privilege and avid supporter of the right to offend, seems to have also been given an indirect shout-out by constitutional law professor, Pierre de Vos.

De Vosâ€™s enlightening reflection on the Rose matter questions whether he should ever have been invited in the first place. De Vos expressed that dynamics of power matter in determining the ethical legitimacy of how and when people usually defend academic freedom â€“ the powerful arguing for free speech to bully easy targets is neither radical nor worthy of celebration.

â€œThe invitation for Mr Rose to speak at an academic freedom lecture at UCT is therefore telling. It suggests a very specific conception of what academic freedom entails, namely the right to offend those whose world view does not accord with the world view of the (mostly white, mostly male) privileged private school educated and Oxford trained senior academics whose values are deeply embedded in the institutional culture of the institution,â€ said de Vos.

Mark of repression or blank canvas?

While it may be impossible to confirm the exact intentions of managementâ€™s duplicitous letter, the sentiment expressed by many councillors and commentators gives the impression that Max Price and his executive team were attempting to minimise risk of stirring political controversy on campus amongst UCTâ€™s â€œleft-leaningâ€ progressive constituency, while at the same time pandering to the hardliners of academic freedom and free speech. While the decision to rescind Flemming Roseâ€™s invite partially served the initial purpose, Priceâ€™s doublespeak was neither convincing nor effective in appeasing those arguing that Roseâ€™s disinvitation was a travesty of academic freedom. As I noted in my last piece, Priceâ€™s doublespeak also ended up inadvertently scapegoating the Muslim community of Cape Town.

Overall, it seems the blank space that marks this yearâ€™s TB Davie Academic Freedom Lecture is to be viewed, historically, as another turning point for UCT. For some, the blank space no doubt represents a mark of repressive censorship and a departure from UCTâ€™s liberal ideals of free speech.

Yet, in line with the sentiments expressed by Professor De Vos, others may perhaps see the blank space as more akin to a newly reclaimed canvas where an antiquated painting once stood. A canvas that might now be utilised for a more suitable image â€“ one perhaps reflective of a more holistic and colourful vision of the future. One many of us actually see ourselves in.

Blank spaces are not always bad.