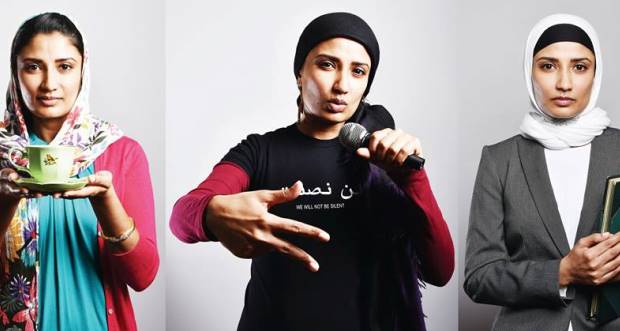 Originally written and produced by Chicago-based writer, Rohina Malik, the play, Unveiled opened at the Wits Theatre on Friday 15 July as a part of the 969 Festival in Johannesburg. The play, which was performed by KZN-born Gulshan Mia, featuresÂ five different Muslim women and their experiences in America post-9/11 combatting Islamophobia. The Daily Vox team checked out a performance.Â

The first is a Pakistani dressmaker (although she refers to herself as an â€œartistâ€). She speaks to a client and relates the reasons why she stopped designing dresses. She offers her chocolate chai, her own invention. She has stopped making wedding dresses because of the trauma she experienced when she got attacked at a wedding. This first story closely resembles the real-life experience of the playwright Rohina Malik and the reason why she wrote the play in the first place.

The next character is Nur, a Moroccan lawyer who serves Moroccan mint tea to her client – a rape victim who does not want to talk about what happened to her. Nur then tells her client about how she fell in love with a guy who was outside of her cultural circle but he got accepted by her family because of his good nature. But her happiness was marred when they were attacked because of their religion – her husband was killed and she was raped. But she finds strength from her strong mother who tells her that silence can sometimes be a crime after she refuses at first to speak about what happened to her.

The third woman is an African American woman, Inez, who drinks kahwa sada coffee. She says that her grandmother used to tell her that she had three strikes against her because she was black, a woman and Muslim. She was forced to remove her headscarf on September 11th because it was not safe to wear it and she wanted to protect her unborn child from harm. The woman also says that she has been judged by the sisters in her community.

The fourth woman is a rapper, Shabana, whose father is from Kashmir and mother is from Hyderabad. She lives in London and drinks pink Kashmiri chai â€œlike the sunsetâ€. She talks about her decision to wear the hijab/headscarf and how she had to hide it from her mother who says itâ€™s dangerous because of the political climate that exists post-9/11. She then talks about what she terms real oppression, apart from the idea of oppression that exists about veiled women. She says real oppression is in the racism that exists as a colonial after-effect and manifests in her motherâ€™s obsession with fair skin. That is why she writes and raps, she says.

The final character is a Middle Eastern (I wasnâ€™t sure which country she came from exactly) restaurant owner, Layla. she offers her patrons sage tea and she talks about her experience of 9/11. She has been named after the Night of Power (Laylatul Qadr) which is a sacred night for Muslims in the month of Ramadaan. She had always thought of herself as weak, but on that day she found her strength and stood up to a boy who was assaulting a friend of hers.

The play was quite powerful, with each of the stories resonating with me a lot in their portrayal of Muslim women from all walks of life. Each of the characters reminded me of the women in my life like my mother, sister, friends and other strong women I had have the privilege of meeting. My favourite characters had to have been Nur because of the way she overcame so much and still wanted to help others, and Shabana, especially because she says wearing the headscarf is a part of her feminism.

Gulshan Miaâ€™s acting was also wonderful, with her transition between characters done effortlessly. Some other audience members found the characters relatable, as did I. However, each character also showed, most importantly, the heterogeneity that exists in the Muslim community. Often, Muslim women are clumped together by Western media as a homogeneous group of veiled, oppressed women who are subordinate to men and have no agency or voice. This play, besides tackling Islamophobia, discrimination and bigotry, also showcased how different Muslim women actually are from each other.

The play has a very important message, especially in the current climate that exists globally where Muslims, and in particular Muslim women, are subject to the most terrible acts of discrimination and violence. The levels of Islamophobia in South Africa might not be as high as the rest of the world but other themes like the racism which Shabana talks about in terms of her communityâ€™s obsession with fair skin and the discrimination which the women face by virtue of being not just Muslim but women in certain cases made an impact for me and made the play very enlightening and enjoyable.