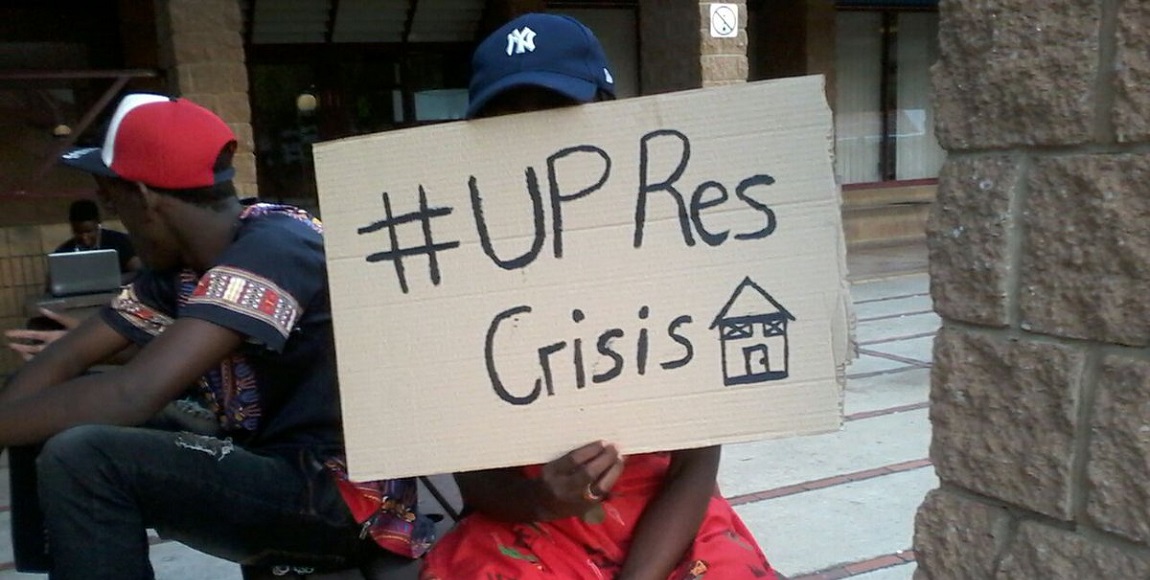 Students at the University of Pretoria (UP) were chased away and allegedly assaulted by campus security late on Monday night. The students were attempting to find refuge in the Student Centre because they had no place to sleep. The students brought the situation to attention under the hashtag #UPResCrisis, but management says it has reason to believe the incident was staged.

Amla Monageng, chairperson of the Economic Freedom Fighters (EFF) Student Command, told The Daily Vox that students sleeping in the Student Centre were â€œchased awayâ€ by bouncers who said they cannot be on campus.

â€œâ€˜Where must we go?â€™ was raised. They were chased out. They were assaulted. One comrade from EFF Student Command was assaulted and she was pregnant.â€

Kabelo Mahlobogwane of the EFF Student Command at UP told IOL that a pregnant student had been injured and that a case had been opened at the Brooklyn police station.

We are at brooklyn police station. A pregnant woman has been beaten up and she is in a bad condition #UPResCrisis

University spokesperson, Candice Jooste, told The Daily Vox the university had â€œreason to believe that the pictures of students apparently without accommodation on social media have been stagedâ€.

â€œThe Temporary Student Committee (TSC) engaged with the students who claimed to be without accommodation,â€ she said, adding that the university had offered accommodation to all of them for the night, but they refused.

Henrico Barnard, Chairperson of the TSC, told The Daily Vox the media campaign – #UPResCrisis – was politicised, but he agrees that the situation must be addressed. â€œThe studentsâ€™ demonstrating highlights a very pertinent issue at residences or with university accommodation,â€ Barnard said.

He said the main reason for the accommodation crisis has to do with government funding scheme, National Student Financial Aid Scheme (NSFAS). â€œThe main issue at this stage is NSFAS not replying or not providing feedback for students yet. Weâ€™re in a position where even if NSFAS has just indicated that you qualify then there are exceptions to be made for residences,â€ he said.

Monageng also said the #UPResCrisis is a recurring problem, but that the issue had to do with the university. â€œLast year, we had this problem and we indicated to management that they needed to lease more buildings to sort out the issue. They didnâ€™t address it. The same thing happened in 2016 when students had to sleep in [the] Student Centre, or in bathrooms and libraries,â€ he said.

The university had promised to resolve the accommodation issue in September last year, Monageng said. After meetings in January, the university leased buildings that could be used for accommodation, but students cannot afford the rent for these buildings.

There are also concerns that places in residence are given to those who donâ€™t really need it.

â€œPeople from Brooklyn, Waterkloof [areas around the university], they are in res – and the worst part is that those people are driving. But people from KwaZulu Natal, Mpumalanga, North West – they are still struggling with accommodation – where must they go?â€

The university said like all tertiary institutions in South Africa, official university residences only have capacity to accommodate approximately 15% of the student body. â€œSome of the key criteria used by the university in residence admission is academic eligibility, academic achievement, financial need, and year of study – with preference given to first years,â€ Jooste said.

Monagengâ€™s estimate places the number of students without residences close to 300.

Jooste, however, said the university had investigated the accommodation crisis and that the number was far less. â€œWe have since discovered that out of the group of ten students, four were already placed in residences, three of them were not students and one had outstanding financial issues. The University was able to find permanent accommodation for the other two,â€ she said.

According to Barnard, â€œthe demonstration is focussed on principle and not the physical need of getting accommodation,â€ and the student body is â€œin communicationâ€ with the students who need accommodation. They plan to set up a meeting to go through the universityâ€™s residence policy.

The students also plan to embark on a campaign for the university to lease buildings that are more affordable.

The university said it is â€œcommitted to and will do everything in its control to ensure that, within the limits of space available in our official residences, eligible students are assisted to find accommodationâ€.

Students are experiencing similar problems at the Durban University of Technology, where there is not sufficient accommodation for the students. This situation is being resolved by the management and the SRC.

The black child stays fighting. It’s always one thing after the other. #UPResCrisis