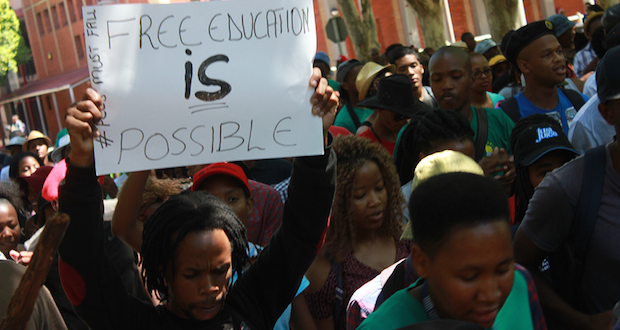 The #FeesMustFall protests have blazed through universities across the country. But not all universities were created equal. Protestors at the University of the Western Cape (UWC) have continued a campus shutdown, but canÂ the university afford what they are demanding? RAâ€™EESA PATHER reports.

Management at UWC was determined that classes would continue Monday, after nearly a week of protests. But it was a lost cause. Student protestors marched door-to-door atÂ the university and its residences, disrupting classes and study sessions, until campus was forced to close.

â€œWe want our people who are less privileged to be on par with those that are privileged,â€ Awongiwe Mango, a student protestor, told The Daily Vox.

The students are demanding that student debt be scrapped, that the Kovacs student residence be institutionalised instead of privately owned, and that the university provide free education. In a university where a large population of students is poor, their demands directly confront the ongoing inequalities in South African society.

â€œPractically every student that is here, is a needy student from a disadvantaged background,â€ said Cherrel Africa, the deputy dean of the economic and management sciences faculty at UWC. â€œStudents who come here, yes they pay less fees, but they are still struggling with issues of accommodation. Food security is a very big issue.â€ As the heat swelled on Monday afternoon, students poured juice and water into cups for protestors. Donations have been trickling in for the student movement, but back at the residences, students say that the municipality has shut off the water. Staff on campus confirmed that water shortages happen intermittently, and this in itself evokes the lack of necessary resources on campus.

Despite the challenges the university faces as an historically black university, created by the apartheid government to provide second class education to coloured and black students, UWC has been ranked as one of the top sevenÂ universities in the continent, and sits in the top 100Â list of Brics universities. But despiteÂ its success, UWC is struggling to obtain funding.

â€œWe struggle with providing our students with the most basic technology in this digital age. Our staff [to] student ratio is absurd. Itâ€™s so high, itâ€™s absurd. We have infrastructure problems. We donâ€™t have sufficient space for students in residences,â€ Tyrone Pretorius, the universityâ€™s rector, told the Mail and Guardian earlier this year.

The largest lecture hall at the university can only accommodate 350 students, which means that larger classes have to be split into two groups. While the university has made its appeal for funding clear, students believe that management has spent an exorbitant amount of money on dinners and galas, hosting influential South Africans like public protector Thuli Madonsela, and former archbishop, Desmond Tutu. In a memorandum released yesterday, students listed 40 demands, which included that registration fees beÂ scrapped and that an investigationÂ intoÂ managementâ€™s â€œwasteful expenditureâ€ be conducted. As students discussed these demands, another student mentioned to meÂ that she has no student card because she would have to pay R150 to obtain one.

With President Jacob Zumaâ€™s announcement that there will be no fee increases for 2016, universities are already flummoxed as toÂ where the funding will come from. But there is an added pressure on historically black universities, who, as UWCâ€™s spokesperson Luthando Tyhalibongo said, donâ€™t have the economic reserves of historically white universities. Inequality isnâ€™t just rampant within student populations â€“ the universities themselves have yet to be putÂ on an even playing field.

Thereâ€™s no doubt that the students are justified in their demands for a free education. The South African Constitution clearly states that higher education is a right, and not a privilege.