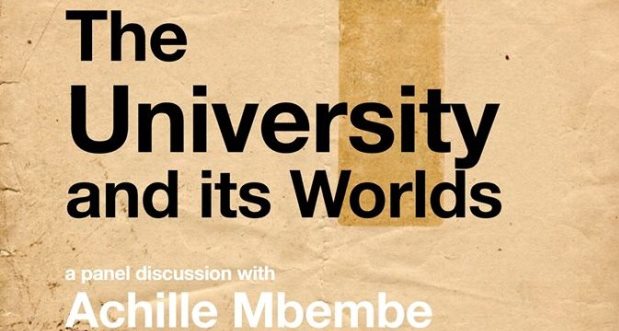 On Thursday the 26th of May, the Centre for Humanities and Research at UWC hosted a talk with international scholars to discuss the idea of the university in Africa.

The talk coincided with many such conversations held to mark commemorations of Africa Day. And of courseÂ as students interested in the de-colonial project, particularly the decolonisation of university spaces and the knowledge creation processes thereof, we made a point of attending all six of the conversations hosted at the university for the 25 and 26 of May.

As we arrived at the talk, which was to be addressed by a majority white panel, to a 90% white audience, we noticed the discomfort of many with our mere presence at the event. The demographic of the audience was something which was alien to event attendance at the University of the Western Cape as the university is predominantly, if not â€œexclusively”, black.

As discussions unfolded, we listened very attentively, disagreeing and agreeing with a number of the points rendered by the panellists such as, â€œthat the university space is no longer just a place of learning, rather it has become an appendage of capital with a crude profit marginalization agenda which inevitably excludes black peopleâ€.

As we welcomed the inputs, we grew increasingly concerned with the fact that this particular talk had taken the very same paternalistic posture of neo-colonialism wherein the black is the perpetual student and the white being the perpetual teacher. As black students who were primarily raising the questions being addressed, we felt spoken over, dismissed and undermined. The conversation was fast becoming violent for us, as in all race discussions, gross misrepresentation of the oppressed was presented and we were expected to absorb, agree and respond in a passive manner.

The dialogue provided here by the UWC Centre for Humanities and Research lacked what Fanon calls a â€œsafe spaceâ€, wherein we, as black students, are not marginalised within the space and within the conversations that are meant to eradicate racism. We felt violated as we were expected to intellectualise our suffering while simultaneously being silenced by a chairperson of the event who sought not to take inputs from students or persons he deemed problematic.

The chairperson, like we were to see from Xolela Mangcu, was quick to dismiss our critique as a personal attack. The critiques passionately made by students were dismissed as childish, emotional rants devoid of any intellectual substance and as such were not given consideration.

After constant pleas for recognition and to be heard on a subject that directly involved us, we decided to take the microphone and democratise it among ourselves in order to give voice to the students that were silenced throughout the conversation. This act in itself was a form of protest to the exclusionary practice that silenced students in their own university and continent. If not for our intervention and challenging of the space, the house at large would have left with the false impression that they had meaningfully contributed to the decolonial project; of course the above is false.

Xolela Mangcu, in his typically self-indulgent manner misread our intervention and protest of the space and in his yearning to appease the 90% whites in attendance, antagonised the already frustrated black students. As admitted in his article titled â€œStudentsÂ shouted me downâ€ , Mangcu assumed a condescending â€œprofessorial and parental authorityâ€ to reduce students to mere unthinking troublemakers. This ageist approach to decorum and what constitutes as proper methods of engagement was correctly seen by students as a way of silencing and siding with everything being protested against hence he was referred to as a â€œUthengiwe loâ€ (a person bought).

Mangcuâ€™s uncontrollable desire to address the event as though he carries the single manuscript to decolonisation is proof of an academic with an exaggerated sense of self-importance. Academics like him often assume the role of parenthood using African notions of community, but are silent when â€œtheirâ€ very children are brutalised by the state apparatus. For instance, as a figure â€œwho has walked with the studentsâ€, what has he done, written or said about the UCT students who have beenÂ systematically expelled from the university?

We are not antagonistic towards academics, nor do we harbour any ill will on Professor Xolela Mangcu but hope that in this process for decolonisation,Â academics like him think with the students and not for them. And most importantly, that they be okay with not being the centre and focal point in our struggle for affording African people their dignity.