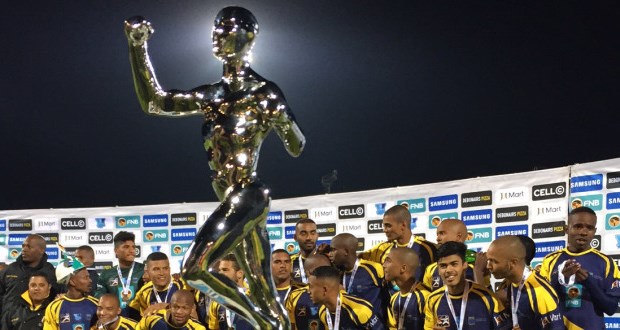 Heritage Day marked the season finale of the third Varsity Football tournament, where first-time finalists, University of the Western Cape (UWC), and the Tshwane University of Technology (TUT), squared off at the UWC Sports Stadium in Bellville, Cape Town.

UWC claimed their first Varsity Football title when they came from behind to defeat TUT 2-1 at the ‘Operation Room’, where they have gone unbeaten throughout the entire tournament.

The tournament is played in two stages – first, the league stage, followed by the knockout stage. The top four teams in the log standings advance to the semi-finals where they battle it out for spots in the final.

After receiving the tag of “underdogs” atÂ the start of the tournament, UWC went onÂ to produce sterling performances where they lost and drew only once. They managed five wins to top the log standings with three points clear.

Every time a team plays at home – where thereâ€™s usually a vocal crowed cheering the team on – they are expected to win. UWC made no mistake as they swept aside opponents in all their six home fixtures. This was one of their cardinal strengths that led them to the title.

Strikers will win you games, but defenders will win you tournaments, a well-known football cliche that UWC reinforced. The team scored 12 goals,conceded less than half of their goal tally (5 goals), and kept three clean-sheets. UWC head coach, Moegamat Salie Adams, believes that a team has to be solid at the back. â€œIâ€™ve got a simple philosophy, that if you donâ€™t concede goals then you canâ€™t lose, and if you donâ€™t lose you might end up winning. Modern football nowadays is all about scoring goals and that is what people want to see. The game is not only about scoring goals, itâ€™s also about stopping goals. You need to balance the two in such a way that your team is successful in everything,â€ said Adams.

UWC depended on team effort. It’s sometimes hard to pull off a good team performance when individual performances are low. However Â their ever-present gallant spirit saw them overturn a 1-0 deficit to emerge 2-1 victors. It was clearÂ that when a team plays as a team, they areÂ a force to reckoned with. â€œWith soccer obviously being a team sport, as a coach you need to make sure that everybody understands their primary role in the team â€“ if you are a defensive player, you need to defend first, attack second â€“ this is the philosophy that was instilled in the players,â€ Adams explained.

Consistency was also an integral part of their campaign. From round 2, they had been sitting at the summit of the log, obtaining 16 points in the process. They enjoyed this luxury when they played their last group match against Nelson Mandela Metropolitan University as an exhibition match, or rather as honouring the fixture.

Out of the squad of 25 players, only three players did not kick a ball throughout the tournament. This was perhaps up to poor performance and a poor approach to the tournament, or because the other playersâ€™ performances were at the highest level. Adams said it was difficult to give everybody an opportunity. â€œTo maintain a winning mentality, you have to stick to a winning combination. At the end everybody was part of it, I tried hard to give everyone a chance. As a coach, you need to understand your players and make them also to understand their roles. They must know that the team comes first,â€ said Adams.

During the half-time team talk, anyone would want to be a fly on the wall to hear what the coach says to the lads, especially as they were trailing 1-0 at home in a cup final. Here is what the coach said to the boys:” Gentlemen, do you realise that this is the cup final? This is the dream that you wanted to achieve, and how did you get to the final? You got here as a team, as a unit. Go out there and play as a team, donâ€™t do anything for you, do it for the team!”

Michaelson Gumede is The Daily Voxâ€™s sports reporter. Got a story idea or want to get in touch? Follow him on Twitter.