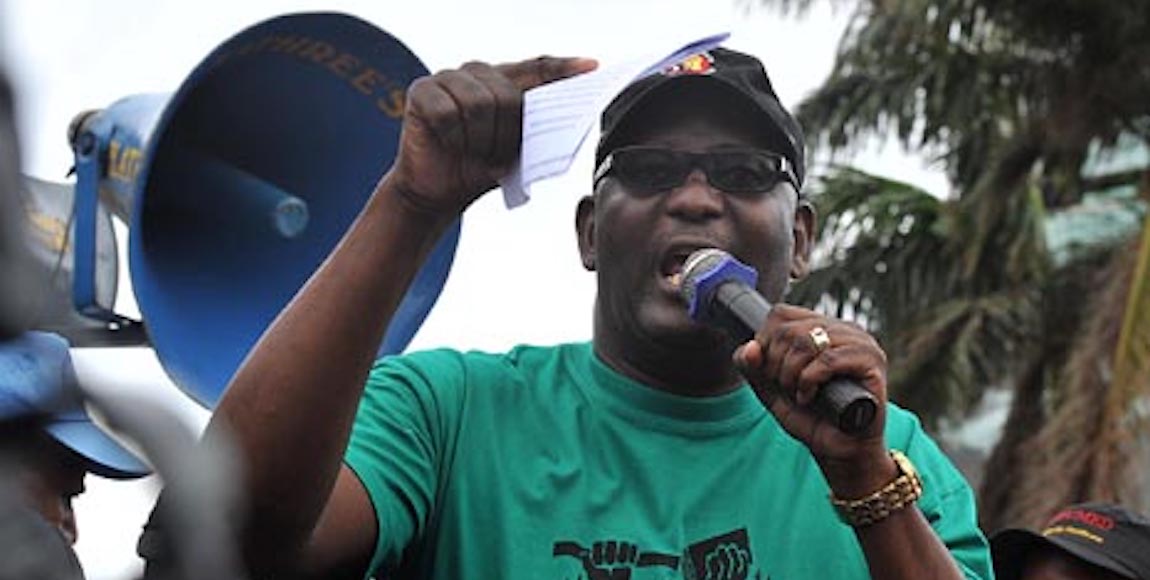 On Tuesday, Zwelinzima Vavi, General Secretary of the South African Federation of TradeÂ Unions, spoke at ‘A Decent Standard of Living’ conference organised by the Centre Studies in Poverty and Inequality Institute in Johannesburg. Vavi did not not hold back. Here is his address, in full:

Thank you for inviting me to speak at this important conference, which is confronting what, is without any doubt the biggest problem we face in South Africa today – the crisis of poverty, unemployment and inequality.

It is a massive crisis, which threatens to roll back all the gains we have struggled for over many years and could plunge the country into a maelstrom of violence and disunity.

The starting point in such discussions is often the fact that South Africa is now the most unequal society in the world. Some dispute this claim, and try to get into pedantic quibbles over how reliable the statistics are, but the evidence is indisputable.

The Gini index, published by the World Bank and the most widely used measure of inequality, looks at the distribution of a nationâ€™s income or wealth. According to the most recent figures, the five most unequal countries in terms of income distribution are South Africa, Namibia, Haiti, Botswana and the Central African Republic.

This measure has become popular among researchers, yet it puts exactly the same five countries in the most unequal positions, with South Africa at the very worst in both indexes.

Schoolchildren will go hungry without infrastructure for feeding schemes

Most of the other four are much poorer countries than South Africa. The Central African Republic is the poorest in the world, 175th out of a total of 175, whereas South Africa is ranked at 82nd. As a relatively rich country it is even more damning that South Africa shares its abundant wealth in the most unequal way and leaves so many millions in poverty.

Figures from StatsSAâ€™s report on â€œPoverty trends in South Africa: An examination of absolute poverty between 2006 and 2015â€ show that in 2015 30.4 million of South Africaâ€™s 55-million citizens lived below the upper poverty line of R992 per person per month â€“ three million more than in 2011.

One in three South Africans lived on less than R797 per month, or half of the countryâ€™s 2015 mean annual household income of R19, 120, with more women affected than men, and children and the elderly hardest hit, while racial inequalities continue to define poverty as largely a black African problem.

For one in seven South Africans (13.4%) this meant extreme food poverty, or survival on R441 or less per person per month in 2015. â€œThe last five years,” says the report, â€œnotably between 2011 and 2015, have been a rough economic roller coaster for South Africa, driven by a combination of international and domestic factors such as low and anaemic economic growth, continuing unemployment levels, low commodity prices, higher consumer prices, lower investment levels, greater household dependency on credit and policy uncertaintyâ€.

The report also shows that the same period saw an increase of extreme food poverty to 25.2% in 2015, up from 21.4% in 2011. The National Development Plan (NDP) goal to reduce the percentage of citizens in the lowest poverty category from 39% to zero has failed abysmally, as there was no reduction at all but one percentage point increase to 40%.

At the other extreme of inequality, we saw the report by Deloitte accountants that the average pay of executives in the countryâ€™s top 100 companies is now R17.97 million a year, which amounts to R69 000 a day! If that is the average, there must be many who receive even more!

Executivesâ€™ salaries have risen from 50 times to 500 times bigger than workersâ€™ wages.

Many of the companies who are paying these grotesque amounts to their executives are the very ones which are demanding that the unions should agree to lower wages for their workers. Others are outsourcing labour, using labour brokers and retrenching staff in order to increase their profits and throw more workers into poverty. They are the companies, in alliance with government, and scandalously some trade union leaders, who have legitimised poverty by agreeing to a poverty national minimum wage of R3 500 a month.

Inequality and poverty is obviously also linked to shocking rate of unemployment. As Statistician General Pali Lehohla said when introducing his report [on the Quarterly Labour Force Survey] â€œThe key driver of poverty is unemployment.â€

There was a net loss of 113,000 jobs between the first and second quarters of this year. The rate of unemployment remained at 27.7%, at the highest level for 14 years. And the more realistic expanded definition of unemployment, which includes an extra 3.1 million people who were available to work, but did not look for work during the reference period rose slightly to 36.6%.

Unemployment, inequality and poverty must not only be measured in income and wealth but in the social wage. Employment, or employability, depends on education levels. The StatsSA report [on poverty trends] that shows 79.2% of those without formal education were poor in 2015 â€“ down from 86.4% in 2006, but up by four percentage points from 2011 â€“ compared to 8.4% of those with a post-matric qualification in 2015.

In education, health-care, sanitation and public transport, the appalling levels of service in a country where the rich minority elite enjoy world-class service provision make conditions for the poor majority even worse.

This descent into inequality has been taking place under the watch of a government and ruling party which for 23 years have been talking about the need for â€˜radical economic transformationâ€™, while carrying out economic policies based on a capitalist free market and neoliberal policies like GEAR and the NDP which have led to the exact opposite – soaring levels of inequality, unemployment and poverty.

It has allowed resources to be shipped out of the country and reduced tariffs, which enabled the products manufactured from those raw materials to be imported back into South Africa, causing local manufacturing jobs to be lost.

The economic crisis is now made even worse by the explosion of corruption, looting and the capture of state institutions by crooked politicians and public officials, head of state-owned enterprises and a widening layer of international companies -not only the Guptas – who have been shifting money from the public purse into the pockets of this new class of billionaires.

Schoolchildren will go hungry without infrastructure for feeding schemes

This has robbed the country of billions of rands, bankrupted state-owned enterprises, sabotaged public institutions, undermined democratic accountability and led to the rating agencies downgrading the country to junk status, and a looming economic and social catastrophe.

So what is to be done?

I welcome the fact that handful of business leaders and organizations have now admitted that things have to change and are talking about the idea of â€œinclusive growthâ€ and some sort of social compact between government, business and labour, as the solution to the problem of inequality and the anger it is stoking among the workers and the poor.

Yet the Deloitte report proves that this message has totally failed to reach most business leaders who blindly pursue policies that exclude millions of the poorest South Africans, the workers and the unemployed while making themselves richer and richer.

It is further shown by all those companies in the cement, food, dairy, bread, construction, pharmaceutical, fire-control and other sectors which the Competition Tribunal has found guilty of price-fixing, collusion over tenders and other forms of anti-competitive practices.

But inequality is not some sort of unfortunate mistake that can be solved by well-meaning individuals and companies tinkering with the way the economy is managed and trying to enforce higher ethical standards.

Even if more business leaders join this call, it cannot change the basis of a system, which is driven solely by the need to maximise profits. Important decisions on investments and disinvestments are increasingly taken by asset managers and investment brokers, which use IT programs to track all sorts of statistics to calculate which investments will yield the biggest and quickest return to shareholders.

They never stop to look at the impact on workersâ€™ jobs, communitiesâ€™ livelihoods, the environment or the long-term future of the economy.

This is why the NDP is fatally flawed. It promises to reduce poverty, unemployment and inequality by 2030, and reduce poverty-induced hunger to zero. But is can achieve none of these targets because its vision for the economy is rooted firmly in the belief that wealth and power must remain in the hands of unaccountable capitalist monopolies, still overwhelmingly white-owned, operating under a neoliberal capitalism economic system, enforced by rating agencies. This is the main reason why we have this economic crisis in the first place.

That is why SAFTU and a growing number of people around the world are now demanding a fundamentally different, socialist economic structure. We are determined to reinstate the real program for radical economic transformation, which has unfortunately been hijacked by corrupt
faction, and to mobilise mass support for it, based on the call of the Freedom Charter that â€œthere shall be jobs and securityâ€ for all.

We have already submitted a Section 77 notice at Nedlac [National Economic Development and Labour Council] to demand a new growth path to change the structure of the economy and ensure redistribution of wealth, land, and opportunity for all. We have demanded that the crisis in the education system be fully addressed and are mobilising for a full-blown strike in November in support of these demands.

We are the children of liberation, the (un)free generation.

We are embarking in the process of consultation with leaders of civil society formations to ensure that the strike is not just a workers strike but also a demonstration against the status quo. The mobilisation should involve the unemployed, workers in the informal sector, communities struggling against poor service delivery in such things as housing, infrastructure, access to land. We want to unite with students fighting for free, compulsory, high quality public education system, etc.

SAFTU agrees that there must be a much deeper engagement with business, labour and civil society but we have only condition, such an engagement should be how we remove the foundation of the status quo and replace with a genuinely thorough going transformation of the
economy to serve our people not the small elites who are the beneficiary of the status quo.

Only by the nationalisation of the mines, banks (including the Reserve Bank) and monopoly industries can we end the job-loss bloodbath, create jobs and security for all and liberate the workers and the poor from the exploitation of the white monopoly capitalist elite.