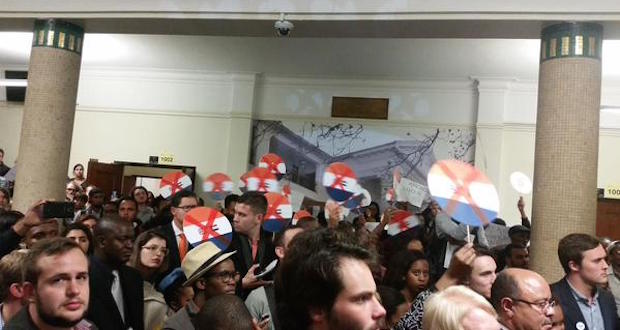 On Wednesday night, Stellenbosch University replaced a plaque commemorating former apartheid prime minister Hendrik Verwoerd with the South African flag. It has taken the university 21 years to make the move, but will it be enough?

The university made the decision to take down the plaque from the Accounting and Statistics building in April after the campus organisation Open Stellenbosch demanded that university management accelerate transformation on campus.

Speaking at the ceremony, the universityâ€™s rector and vice chancellor Wim de Villiers invited students to engage with management on issues of transformation.

â€œLet us talk the talk and walk the walk on a path of inclusivity together so that we can build the future that we want for our university,â€ de Villiers said.

Open Stellenbosch meanwhile said in a statement that while they support the removal of the plaque, issues such as the universityâ€™s Afrikaans language policy must be addressed.

â€œWe call for the management to respond to the demands for transformation at the university (particularly with respect to the language of instruction) we handed to the Vice Chancellor Wim de Villiers two weeks ago,â€ the movement said on Facebook.

The memorandum Open Stellenbosch delivered to De Williers stipulated that the university must make English the language of instruction in all aspects of the university, so that students who donâ€™t understand Afrikaans would not be marginalised. Students in the movement believe the university culture is exclusionary, particularly towards black scholars.

â€œIâ€™ve been on campus for eight years, and walking in and seeing the plaque of Hendrik Verwoerd has always felt really damaging,â€ Mwabisa Makaluza told The Daily Vox at the memorandum handover earlier this month. â€œItâ€™s good that the management is removing the plaque of Verwoerd, but we, as Open Stellenbosch, are calling for full transformation.â€

Verwoerdâ€™s grandson, Wilhelm Verwoerd attended the ceremony and said he welcomed the move.