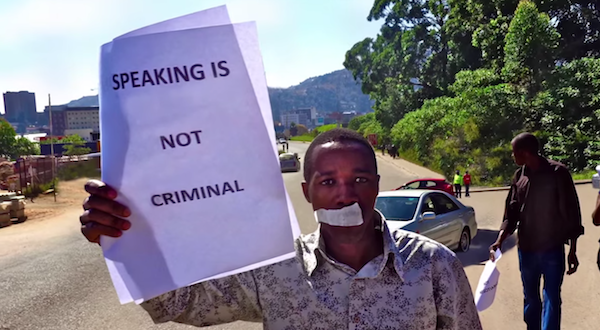 â€œThe path to freedom goes through prison, but the triumph of justice over evil is inevitable.â€ â€“ Thulani Maseko, jailed human rights lawyer.

This time next week, Thulani Maseko and Bheki Makhubu may beÂ released from their wrongful imprisonment in a Swazi jail. But they will not be free men. They are subjects of anÂ absolute monarchy, the last in Africa, one which continues to use its courts to violate its people’s rights and abuse its powers. Yet very few people seem to care.

Many South Africans are unaware of what happens in the small country nestled within ourÂ borders. The #SwaziJustice campaign, an advocacy initiative calling for an end to human rights violations in Swaziland, hasÂ released a video trying to fix that.

Chronic poverty is rife in Swaziland and two-thirds of Swazis cannot meet even basic food requirements. Meanwhile King Mswati III maintains a lavish lifestyle,Â with 13 royal palaces, a fleet of luxury vehicles and a $17-million private jet. And yet because of restrictions on free speech and the right to assembly, the people of Swaziland cannot gather freely toÂ protest this injustice.

Maseko, a human rights lawyer, and Makhubu, a respected journalist, were convicted of contempt of courtÂ in July and sentenced to two years imprisonment for writing articles critical of the judiciary in The Nation, a Swazi political magazine.

Support for Swaziland, and for Maseko and Makhubu, is growing, albeit slowly. In the #SwaziJustice video, former archbishop Desmond Tutu appears alongside notable authors, human rights activists and legal experts to call for Swaziland’s liberation. Last year, the African National Congress spoke out against Swazilandâ€™s absolute monarchy and called for the country to be democratised. The Centre for Human Rights at the University of Pretoria wrote a statement demanding the release of Maseko and Makhubu. Cosatu, which has a close relationship with the Swazi trade union TUCOSWA has also been vocal in denouncing Swazi rule.

But more needs to be done.

Maseko and Makhubu have lodged an appeal which will be heard on 3 November.

#SwaziJustice has called on citizens worldwide to share its video and support Amnesty Internationalâ€™s campaign to release Maseko and Makhubu.

Read more about the case on the #SwaziJustice website.