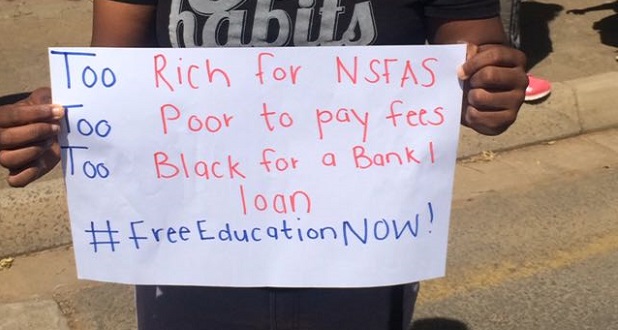 Minister of Higher Education, Blade Nzimande’s announcement that university fee increases would be capped at 8% led to protests erupting at universities across the country. Kwazi Dlamini and Lizeka Maduna went out to chat to Durbanites – students and ordinary citizens alike – to hear what impact they believe a fee increase will have on them. Nkosikhona Zungu, 24, unemployed, Jacobs
[dropcap]”[/dropcap]I do not think it is fair that some people will pay more than others and I also donâ€™t think itâ€™s fair if the fees increase because this mostly affects black South Africans. Even on Facebook, you can see some white people attack the protesting students saying they should be arrested and that is because they know that even if the fees increase they will be able to afford them while the students are fighting for everyone. There is no equality in what the minister said and his statement does not represent what we as South Africa stand for.“ Mthobisi Ndokweni, 20, student, Durban
[dropcap]”[/dropcap]Currently I am a self-paying student and it is not because I can afford but itâ€™s because I couldnâ€™t get funding. I am struggling to pay my fees as it is and it the fees were to increase by 8% that would force some of us to not return to the university next year. I hear people talking about Fees Must Fall and I understand that notion well, but right now I think we must focus on setting the goal of no fee increment here at UKZN.“ Lethukuthula Nkosi, 20, student, Durban
[dropcap]”[/dropcap]I was lucky enough to be funded and have a residence but there are students who are not on funding because they were told that NSFAS is not enough for all of us. Since their budget is not enough to accommodate everyone, if the fees go up by 8% that means there are students who still wonâ€™t be funded. Those of us who are on NSFAS are more likely to be excluded next year and if that happens it means I might not be coming back. This will affect everyone regardless of whether one is on funding or not; a number of students might have to drop out.”

But not everyone agrees that free education is the best solution – some people worry that maybe there are more pressing issues facing South Africa’s economy. Ayabonga Ngwenya, 28, packer, Syanda
[dropcap]”[/dropcap]I think what the minister said does not make any sense and I am surprised he said that in front of the whole nation. If the fees increase they must increase for everyone, if it’s free education then it must be for everyone. However I am against the fight for free education merely because we are a developing country and we still have a lot of problems with our economy. The only thing the government should do is clean up NSFAS, make it a reliable scheme and make it more accessible to needy students. I also wanted to further my studies but I did not have money to do so now I want my children to make it to varsity by using NSFAS because I still canâ€™t afford the fees.” Smangele Ngcobo, 19, student, Pinetown
[dropcap]”[/dropcap]The 8% fee increment came as a shock for me because itâ€™s too much, especially for those who donâ€™t have funding like me. This will probably affect a number of students who are not on funding including me because I am self-paying student. Since I couldnâ€™t get funding this year, chances are I might not come back next year due to outstanding fees. However on the other hand, I feel that South Africa is at a point where inflation is too high, everything has a price and everything has become so expensive. We have to look at things in different ways.“

And some would say that what Blade had to say really wasn’t that bad. Nondumiso Mbhele, 23, salesperson, Phoenix
[dropcap]”[/dropcap]I think what the minister said was not that bad because even NSFAS is not given to everyone; they give it to needy students while others have to pay for themselves, but the only difference now is that they wonâ€™t get an increase in their fees. There has never been equality when it comes to NSFAS students and self-paying students. NSFAS students always have an advantage even when they fail to pay their fees, the student leadership strikes until they are allowed to register for the next year without settling their previous debt but self-paying students have to see for themselves. This is not just about equality anymore.“

And some people are thinking in terms of parents and children. Bridgette Mvusi, 26, nurse, Inanda
[dropcap]”[/dropcap]My personal opinion is that they should not even increase the fees for now, they must wait maybe another five years because students are angry right now and we all know what they can do when they are not satisfied. It is time the government listened to its most important citizens for once or this country will go down the drain with violence, but then again the ministers do not care about burnt universities because their children study abroad. I support the students on their quest for free education because I have a daughter and in 15 years she will need to go to university but the money might be the problem.“ Londiwe Dlamini, 17, student, Durban
[dropcap]”[/dropcap]My mother is a single parent and as much as she is working, she cannot afford to pay for my fees. She is trying by all means to settle my tuition for this year but if the fees increase by 8%, I doubt she will be able to pay for my fees. I might be forced to drop out because I was told that NSFAS is not enough for everyone. Yes, the funding is there and most of us do qualify for funding because we are from underprivileged families but it is not enough to accommodate everyone hence some of us might have to drop out, especially now that they want to increase fees by 8%.“

In the end though, even students who areÂ more privileged have a role to play in these protests. Waris Asmal, student, Durban
[dropcap]”[/dropcap]Fee increment might not personally affect me but even us students who can afford, we sympathise and we understand as individuals who are unemployed. We also know that if you donâ€™t have any money you canâ€™t get education you canâ€™t build a life for yourself and canâ€™t do things that other people do. Personally, I may or may not run into financial trouble but the real question is what about the people who are NSFAS students and those who are not on funding? These individuals are the ones that deserve attention. The fact that they donâ€™t have money doesnâ€™t mean they are less important and it doesnâ€™t mean that we canâ€™t unite behind them. I think we sent a clear message today that it is unacceptable to have individuals that canâ€™t afford university and the government leaves them out to dry. Currently the fees are unacceptably going up; we support the call for free decolonised education.“