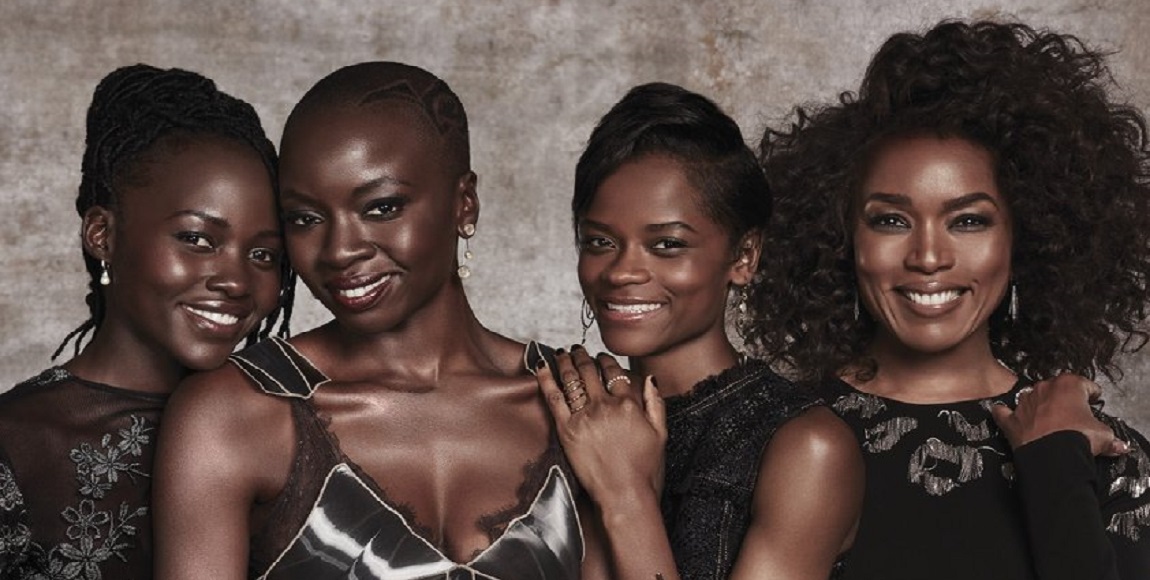 Black Panther has been making waves since its release last week. From itâ€™s entirely black cast (save for two white men), to the thrilling storyline and themes, to the sets and costumes, audiences have been enthralled. But thereâ€™s one group from the film who have made the greatest impact: The Women of Wakanda who play magnificent roles in the film but are just as awe-inspiring in real life. In this weekâ€™s FanGirl Friday, SHAAZIA EBRAHIM and FATIMA MOOSA write about why they stan the women actors both on and offscreen.

Lupita Nyongâ€™o plays Nakia, a spy for the Wakandan nation who travels the world, helping people in need. Nakia is also Tâ€™challaâ€™s love interest and urges him to use the countryâ€™s vast resources to help others.

The Mexican-Kenyan actor graduated from Hampshire College with a degree in film and theatre then later enrolled in a master’s degree program in acting at Yale where she appeared in many stage productions and won the Herschel Williams Prize for “acting students with outstanding ability.” Nyongâ€™o had her breakthrough role in 12 Year A Slave (for which she won an Oscar for Best Supporting Actress) and has since acted in Queen of Katwe, The Jungle Book, and Star Wars: The Last Jedi to name a few. She is fluent in Spanish, Luo, English, and Swahili.
Nyongâ€™o has dabbled in directing and writing – and sheâ€™s good at it too. She wrote, directed, and produced a winning documentary called In My Genes and directed the music video that was nominated for the Best Video Award at the MTV Africa Music Awards 2009.

Nyong’o is also set to co-produce and star in Born a Crime, a film adaptation of South African comedian and The Daily Show host Trevor Noah’s memoir, Born a Crime: Stories from a South African Childhood, as his mother.

This year Nyong’o is treating us to her writing debut with a book entitled Sulwe. Sulwe (Luo for â€˜starâ€™) is the story of a five-year-old Kenyan girl, who has the darkest complexion in her family, for which Nyong’o drew upon her own childhood experiences. Our hearts!

Like any queen, Nyongâ€™o boasts a number of titles: 2013 best dressed list in Harper’s Bazaar, 2014 Most Beautiful Woman by People, the first black ambassador of Lancome, and 2014 Woman of the Year by Glamour to name a few.

And then thereâ€™s Nyongoâ€™s activism. Nyongâ€™o penned a letter (posted on social media) to Richmond, Virginiaâ€™s mayor in 2014 to oppose development in a historic neighborhood which was the site of slave-trading before the American Civil War.

Nyongâ€™o is the Global Elephant Ambassador for the international conservation organisation WildAid. She launched an anti-poaching Hearts and Minds campaign in 2016 in light of Kenya Wildlife Service’s historical ivory burn, where it burned tonnes of ivory and rhino horn to demonstrate against poachers and smugglers.

Nyong’o is also involved in womenâ€™s health with the organisation Mother Health International, dedicated to providing relief to women and children in Uganda by creating locally engaged birthing centers. For her work here she was honoured at 2016 Variety’s Power of Women.

In her contribution to the #MeToo movement, Nyong’o wrote an op-ed for The New York Times in October 2017 about how Hollywood producer Harvey Weinstein sexually harassed her twice in 2011. Nyongâ€™o vowed that she would never work with him and declined a role in Southpaw. She also wrote about her commitment to work with women directors or male feminist directors, who had not abused their power.

We present to you a queen – not only of Wakanda but the world itself. What did we do to deserve Lupita Nyongâ€™o?

Danai Gurira plays General Okoye, the head of the elite military group, the Dora Milaje, that protects the ruler of Wakanda. Her fighting skills and one-liners are brilliant to say the least.

The Zimbabwean-American actor and Tony-nominated playwright is well known as zombie-slayer Michonne in The Walking Dead. Gurira has a master of fine arts degree from New York University and has written six staged plays, including Eclipsed, a 2009 hostage drama about sex slaves during the second Liberian civil war (starring her eventual Black Panther co-star Lupita Nyongâ€™o). Gurira said that she started writing plays to better her acting skills and to tell stories that convey ideas about women with whom she identifies. She taught acting and playwriting in Liberia, Zimbabwe, and South Africa.Â A multingual, Gurira speaks four languages: French, Shona, basic Xhosa, and English.

In an interview with Vogue in June 2016 about the all-female cast of Eclipsed, Gurira said: â€œWe are used to womenâ€™s narratives being defined through the male perspective. I challenge that as a concept. It was about illuminating those that often get obscured by war. We always hear about the men who are perpetuating the war, the ones who come in and stop the war. But we never hear about the women who are at the mercy of a war. Itâ€™s about that light that gets obscured,â€ said Gurira.

Guriraâ€™s activism is in her work. Eclipsed was inspired by the abduction of the Nigerian Chibok school girls in 2014 and that sheâ€™d always been deeply passionate about sexual violence against women and girls. â€œIf my work is on the stage, you can be rest assured Iâ€™m going to make use of it as a platform for activism as much as possible,â€ Gurira told Vogue.

This is only the beginning of her activism. Gurira appeared at the Global Green Sustainable Design Awards in 2008 to read a letter written by a New Orleans native displaced by Hurricane Katrina. She co-founded an organisation dedicated to arts education in Zimbabwe called Almasi Arts Inc. where she currently serves as the Executive Artistic Director.

Gurira is passionate about womenâ€™s rights. She signed an open letter started by the ONE Campaign in 2015 addressed to Angela Merkel and Nkosazana Dlamini-Zuma (who served as head of the G7 and the African Union Commission respectively) urging them to focus on women. Gurira founded the non-profit organisation Love Our Girls (LOG pledge), to highlight the issues and challenges that specifically affect women throughout the world. She told Vogue LOG pledge is an awareness hub. â€œThe more I keep myself aware, the more I get sparked with outrage and ideas around how I can make a difference. Weâ€™re still stuck in an epidemic around this issue, and itâ€™s crazy. Why is there no gender equality anywhere on the globe? Weâ€™ve got to give it our full attention,â€ she said.

And can we also just say we are brought back to life with the camaraderie between the cast members – especially the sisterhood between Nyongâ€™o and Gurira.

Wakandan princess Shuri is King T’Challa’s scientist sister who heads the Wakandan Design Group. She uses her genius to help her nation and creates gadgets that aid her brother as the Black Panther. According to Marvel canon, Shuri is the smartest person in the entire Marvel world – more intelligent than Tony Stark.

Shuri is played by 24-year-old Guyanese-British firecracker Letitia Wright, one of the few Avengers actors under the age of 30. Born in Georgetown, Guyana Wright grew up in London where she attended London’s Identity School of Acting. Wright decided she wanted to act after she watched the 2006 flick Akeelah and the Bee, about a young African-American girl with a talent for spelling. â€œItâ€™s not a famous film, but it just shifted something for me â€“ someone that looks like me, doing something positive,â€ Wright said.

And Wright is all about getting black people to be shown in â€œmore positiveâ€ roles. In an interview with The Hollywood Reporter, she said she grew up watching stereotypes that she didn’t want to play. Wright hopes people can be inspired by Shuri. â€œIt can spark the brain of another kid that loves technology and loves science and lets them see that that’s really cool and encourage them to create the next gadget that’s going to help cure a disease or somethingâ€¦â€ she said. She especially hopes her role will inspire more girls to go into STEM.

Another cool thing that links Wright to Gurira and Nyongâ€™o is that she starred in the West End production of Eclipsed. Howâ€™s that for serendipity?

Top dogs in the industry have scoped her talent already. Director Michael Caton-Jones who helped launch a teenage Leonardo DiCaprio’s career thinks Wright is a “gobsmackingly brilliant” actor and sees the same mega-success in her future.

Not only is she good at acting, she also has a sick flow. “Iâ€™m still the queen of rap battle in Wakanda,” she told Vanity Fair. She and other Black Panther folks reportedly had impromptu rap battles while shooting onset, which she always won. Yaaaaas Queen!

The Black Panther lives… and so does Troublemaker! Introducing MC Underbite (@LetitiaWright), best freestyler in Wakanda. All cred to my girl @RobynHoodmusic for the original inspiration and my bars.
Happy #BlackPantherDay! #BlackPanther ðŸŽµðŸŽ¶ @travbryanmusic pic.twitter.com/pIwO9DNBfP

But Wright remains humble and praises God for her professional and personal success.

I love love love @letitiawright‘s spirit . This interview is a reminder to me how the world can’t stop you when you put God first!! I pray we all are careful to not make idols out of our gifts and remember who gave us those gifts. pic.twitter.com/Okec24LlNC

Queen Mother Ramonde is Tâ€™Challa and Shuriâ€™s mother, and the widow of King Tâ€™Chaka who supports then saves her son while grieving her husbandâ€™s death. She is a figure of quiet strength and dignity.

Bassett has played countless roles but some of her most iconic roles have been in biopics of really fabulous women like Rosa Parks, Coretta Scott King, Tina Turner, and now the literal Queen of Wakanda. Bassett is also Ivy-league educated. She studied a Bachelor of Arts in African-American studies at Yale University and later did a Master of Fine Arts degree – just like Lupita. Come through with those college degrees!

Bassett is also popular in meme culture and has an entire moment named after her in Urban Dictionary. Have you never heard of the Angela Bassett moment? Basically it refers to a moment in which a man/woman gets incredibly angry and pissed at his/her lover (usually for infidelity) and usually involves destroying all of their partnerâ€™s personal belongings they can find. The term was coined from Bassettâ€™s movie, Waiting to Exhale.

Bassett discovered her love of acting when she watched James Earl Jones in Of Mice and Men. She recalls that in that moment: â€œI was glued to my seat and I was just weeping. And then there was a part of me that was so surprised at how profound an experience this was, this theater experience was. Itâ€™s not real but it feels so real and this reaction is so real, and if I could do that to people.â€

And Bassett did just that.

Florence Kasumba plays General Oyo who also makes a small appearance in Captain America: Civil America where she has one of the most epic lines ever telling the Black Widow to â€œMove, or you will be moved.â€

Her career outside of Black Panther and the Marvel universe is quite prolific. She has acted in English, German, and Dutch movies, and is set to be in the new Lion King live action movie. You know the one with Beyonce? She is going to be taking the voice of Shenzi, one of the hyenas from the popular Disney movie.

Kasumba opened up about the lack of queer representation in Black Panther. Fans questioned it because in the canon Ayo is queer, which the film omitted. Kasumba said she would love to see that representation at some point, but right now the focus of the movie is somewhere else.

We are led by the women of Wakanda.