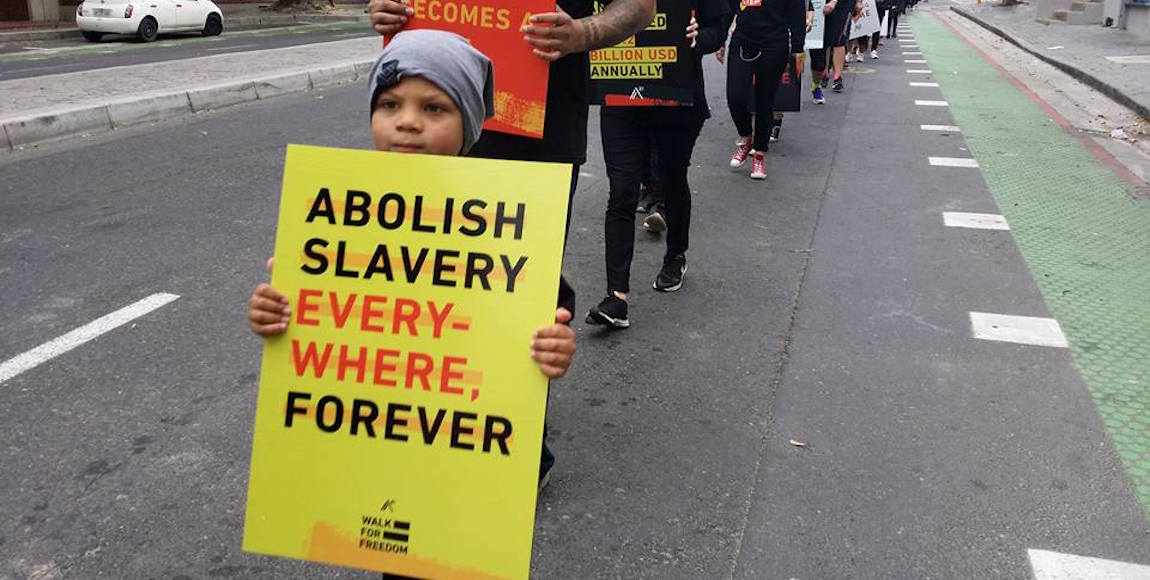 Human trafficking still exists, both internationally and locally, yet not many South Africans are aware of it. On Saturday international advocacy group A21 held its #WalkForFreedom campaign to raise awareness of the continued reality of human trafficking around the globe. A21 hosted over 600 walks in various cities, in what they say was the largest international demonstration held against slavery. The Daily Vox followed the #WalkForFreedom Cape Town event. Around 1 000 people congregated at Cape Town High School on Saturday morning, before departing on a 5km walk around the CBD. Many protesters donned the official A21 kit, which was purchased to help raise funds for the NGO.

Rene Hanekom, A21â€™s resource line manager, said the point of the walk was to raise awareness about human trafficking. â€œHere in Cape Town we just walked down Long Street and Bree Street, where there are a lot of brothels and also where a lot of victims are forced to work as prostitutes. So the route of the walk was very important itself.â€ #WalkForFreedom is a global event, with sister protests in Germany, Bulgaria, and London, among others. In South Africa, A21 held events in four major cities. â€œWeâ€™re trying to reach as many people as possible, and every year the number increases,â€ said Hanekom. Hanekom said there are over 27 million people in slavery globally, and a quarter million of these in South Africa alone, with labour trafficking and sex trafficking the most dominant forms. â€œWe actually believe the statistics are much higher than that, itâ€™s just that people are not aware of it and people donâ€™t know how to identify it,â€ she said.

Hanekom said that South Africa sees various types of trafficking because it is â€œa source, transit and destination countryâ€.

â€œPeople are often tricked through false promises of job opportunities. Theyâ€™re told to work in someoneâ€™s home or travel large distances to the city from rural areas under the promise of a job, and then they actually end up being trafficked. Itâ€™s not uncommon in South Africa that women end up forced into the sex trade this way. Traffickers exploit and manipulate the people because they understand that so many are desperate for job opportunities – but foreign nationals at the most risk,â€ said Hanekom. Hanekom said statistics show that there are over 10 000 children working as prostitutes in Johannesburg at the moment. The statistics for Cape Town are less reliable, adding, â€œWe do see a lot of children either being forced to beg on the streets or being used for sexual purposes and itâ€™s a considerable issue in the Western Cape.â€

In South Africa, A21 – which stands for â€œabolishing injustice in the 21st centuryâ€- focuses on rescuing people who have been identified as victims of trafficking, helping survivors to reunite with their families or return to their home countries, and building awareness of human trafficking at schools, colleges, universities and community groups.

For more information and advice on addressing suspected human trafficking, you can contact the National Human Trafficking Resource Line, which is operated by A21 and its partners, by calling 0800 222 777 or visit the website.