Home Debate Columnists Why is violence on Black women’s bodies so normalised on our screen...
WhatsApp
Facebook
Twitter
Email
Print 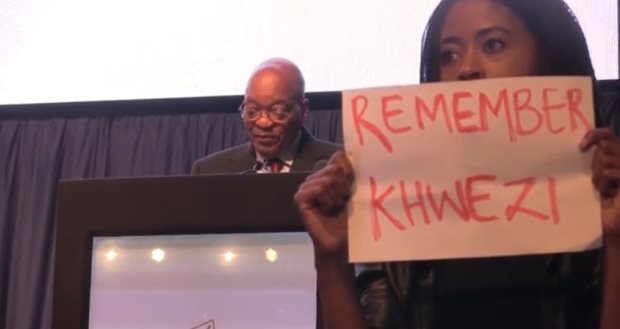 I have been listening and reading some of the things being said aboutâ€ª #â€ŽRememberKhweziâ€¬.

I think I have come out with more questions than answers.

1. So you have just seen women being violated on TV by bodyguards and your concern is for Jacob Zuma? Why is violence on Black women’s so normalized on our screen that we don’t even blink?

2. Why does Simamkele Dlakavu have to account for Julius Malema’s patriarchy and rape apologist stances?

3. Why do we insist on seeing Black women as one dimensional beings with no agency? Why do women have to be ‘sent’ by men? 4. Who was sending Sima during â€ª#â€ŽFeesMustFallâ€¬ and when she was organizing with the feminists at Wits the naked protest against Rape Culture? And why are we only sharing her photos in EFF regalia? And not also the photos where she is naked protesting rape culture? Or when she was hit by stun grenades by police at Wits? Where are the pics when Sima is fighting hard for Black women and queer people?

5. Perhaps the most difficult question for me, was Khwezi consulted? Did she consent to her name being dragged through the mud and victim blamed all over again?

6. Will the women of the EFF also protesting against the rapists and patriarchs and homophobes in the EFF. Like, when Malema speaks next, will you fuck shit up?

Perhaps you guys can help me with this.

I love you Sima and the other brave women who fucked shit up yesterday. I think August should be a month where we disrupt all government and political engagements during so called ‘women’s month’.

South Africa is the only place where they hate women with a passion yet celebrate women for a whole month. It’s sickening.

This was first published on Wanelisa’s Facebook page. It has been edited for brevity and clarity.