Home Features Was Julius Malema a thug or gallant in the incident at a...
WhatsApp
Facebook
Twitter
Email
Print 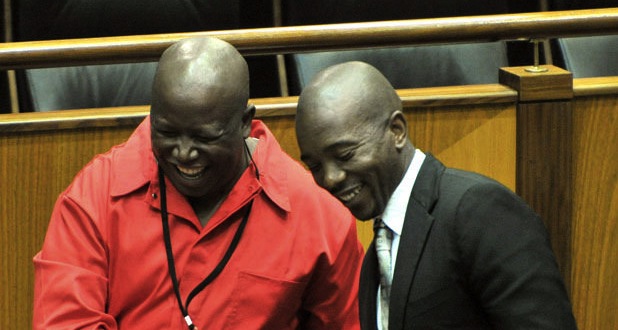 Like everyone else, I didnâ€™t know what words were uttered in the security video showing EFF leader Julius Malema caught in a heated exchange with a man at a Tzaneen Steers.

But I recently got an opportunity to hear the incident described by waitresses who were on duty when the incident occurred. I had bought coffee next door and ordered breakfast at Steers. As I waited for my breakfast, I joked that to keep me occupied while they were preparing my food the staff should tell me what had really happened the day Malema walked into their restaurant.

I am not sure what I was expecting but everyone wentÂ quiet for a few seconds. They gave me suspicious stares and wanted to know why I was interested in the story. I simply said I saw the video and I was curious. In the end, I sat for more than an hour, listening to the staff talk candidly about the incident and their thoughts over the furore it had wrought.

According to one staff member who was working that slow service night, what the staff saw and what’s being shown in the media are two different things.

It all started when a white woman came in and ordered a meal, I was told. It was a busy night. One waitress had taken a break and had been gone for longer than expected, straining the service even further. The woman had to wait a long time for her order but, the staff member told me, other people there that night were also waiting for their meals.

The woman, who appeared to be friendly and calm, got tired of waiting and called her husband. Shortly afterwards,Â  a visibly drunk white man walked in and started swearing and hurling insults at the person behind the counter.

He was rude and drunk, the staff member told me. But white people in Tzaneen talk to service staff at the take-aways any way they like, said the staffer.

No one said anything to the white man until, that is, someone in a white shirt and enough guts walked in and called him to order. This man, who turned out to be Julius Malema, did what most people in Tzaneen would not dare – he patted a white man on the back and told him to show some respect to the workers.

The staffers told me they they feltÂ as though Malema had stood up them when they were being verbally attacked.

For almost two months after the incident, I was told, the staff kept getting calls from an Afrikaaner man asking for the footage of Julius Malema attacking a white man. At first they didn’t know what the caller was talking about. The person kept insisting and calling until they remembered the morning of 6 August and what had happened then. They referred the caller to their ‘Afrikaner boss’.

It must have not have taken too long to release the tapes because shortly afterwards the video was on the news, having been released to the press by the Afrikaaner lobby group AfriForum.

The staff member I spoke to expressed her disbelief, upon hearing a description of the video, of the way it was being described. “Were white people in Tzaneen conspiring to lie to protected one another?â€ she asked. It seems, she said,Â  though white people believe they have an inherent right to mistreat black people and talk rudely to them.

This Sunday morning interaction between Malema and Cassie Moller reminded me of how I and many others around me in Tzaneen have managed to thrive despite the racist attitudes that exist around us.

I was reminded of my own encounter with racism on a Tzaneen sidewalk on 5 October 2013. I was making my way to the town centre from a nearby residential area, with earphones in my ears. I got the fright of my life when a white bakkie aimed straight at me. The driver swore and pointed his fingers at me, without any provocation. I vented about it on Facebook and Twitter, then moved on with my life.

Out-of-town visitors often regard our town as strange and uncomfortably complacent – interactions between black and white are few and where they do occur, there is no equality between the parties involved. These interactions, like with the incident at Steers, usually take place under an air of superiority. So, despite the lack of audio evidence on the security footage now going viral, Iâ€™m inclined to believe the version of events Iâ€™ve been told by these eyewitnesses. Masutane Modjadji is a journalist from Tzaneen. She studied journalism at the Cape Peninsula University of Technology and is currently Â acting head of news at Phalaborwa Community Radio station.Â