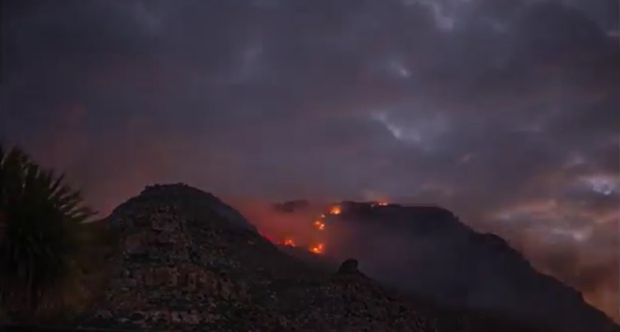 Cape Town cameraman Jason Aldridge has made a time-lapse video showing the spread of the Muizenberg Fires in just under two hours last night.

High winds in Cape Townâ€™s south peninsula have fanned the raging fire and eyewitnesses have said that as many as four homes have been destroyed. The US consulate in Tokai has had to be evacuated, as has at least one old-age home.

Filmed from 7.39pm to 9.32pm on Sunday, the video shows how the fire spread as the sky darkened.

– For updates on the fires, follow the Volunteer Wildfire Services on Twitter.
– Featured image: Screengrab from Aldridgeâ€™s video.