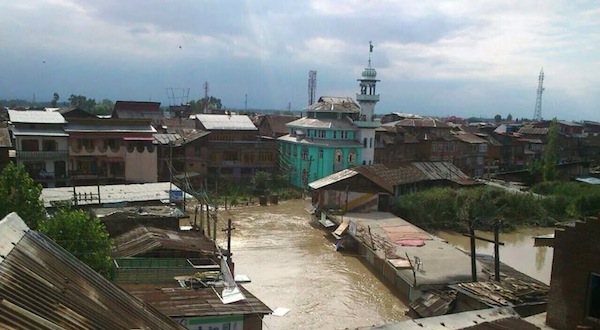 As I write this I can’t call home. I have exhausted my contact list; IÂ keep pressing the call button but I hear no voice on the other end.Â My heart races as I wait to hear from my family andÂ friends engaged in what is a massive disaster.

The Indian-administered capital Srinagar, called the Venice of the East, is currently submerged underÂ water. People are stranded in their houses, standing on their roofs, crying for help to arrive, as their hope and courage washes away.

There have been constant blocks and breakdowns in communications. Social media has been a source of relief for many Kashmiris in theÂ diaspora. Checking #KashmirFloods on Twitter for real time updates from home brings news but also pictures of broken homes and agonisingÂ pain.

Rescue operations are going at a snail pace and local youth areÂ spearheading the charge in relief efforts, armed with makeshift rescue equipment. The shikarasÂ – wooden boats – that once speared through the still waters ofÂ Dal Lake have now become rescue boats on the now fearsome Jhelum River.

Those in safer and higher areas have opened their homes and otherÂ buildings for displaced people. Relief has been arranged by people working onÂ their own without any packages being announced by the IndianÂ administration in Kashmir.

Young people are risking their lives rescuing those leftÂ stranded, even though they are not sure about their own families.

But when Jhelum’s current gets stronger and breaches dangerous levelsÂ in the old city, which lies on the both sides of the river, these localÂ operations will become more dangerous.

The geopolitics of the occupation and conflict in Kashmir have essentially barred international organisations from bringing humanitarian relief to Kashmir, with the Indian media playing PR lobby for the IndianÂ army and the government whose action on the ground has been dismal.

Though promises have been made, so have the rhetorical statements ofÂ ‘grief’, and it remains to be seen how many Kashmiri bodies willÂ be necessary for the rescue operations to be taken up on the same scale as military operations in the region.

As the night falls in the city where I was born and brought up, in itsÂ alleys which are immersed with floods, I hope that Kashmiris will comeÂ out of this tragedy like they have from others. Muhammad Faysal was born and raisedÂ in the besieged city of Srinagar in India-held Kashmir. He is a blogger and a news buff. Follow him on Twitter.

HaveÂ you been affected by these floods in Kashmir? Do you haveÂ a story to tell? Get in touch with us here.Â