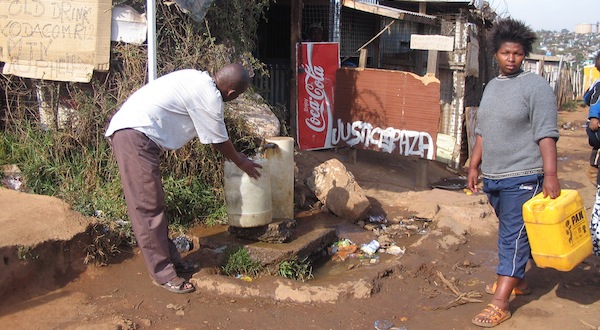 In Gauteng water has finally been restoredÂ toÂ mostÂ areas, but it left many South Africans with questions. Why were there water shortages in the first place? Why now? And why were we not prepared for them?

Rand Water, which is responsible for purifying and supplying water to the Johannesburg municipality, reports that Gautengâ€™s current water shortage is the worst they have had in theÂ pastÂ 110 years.

According to Rand Water, the initial shortage was due to the recent temperature increases, which increased the demandÂ forÂ water. The theft of Eskom pumping equipment further exacerbated the problem as water could not be pumped into reservoirs, leaving even more Johannesburg residents without water for up to a week.

The public outrage at the water shortagesÂ was inevitable.

But for someone like me, who grew up in a village just outside Rustenburg in the North West, water shortages are nothing unfamiliar.

While a week of water may seem like a nightmare for Jo’burg residents, people living in rural parts of South Africa have long ago had to come to terms with regular water shortages.

â€œIt amuses and frustrates me that Jo’burg people are going crazy about not having water; this is something we are used to here. At least they get provided with water trucks,â€ saysÂ switchboard operator Maria Lebaka*(54), a residentÂ ofÂ Moruleng, a village just 30km from the luxurious Sun City hotel and resort.

â€œWe have been without a proper supply of water for a month now. Rona, ke indonda iyaz’bonela,â€ she continues. (For us it is every man for himself.)

â€œMy family and I are privileged enough to have a JoJo tank, saysÂ Lebaka. “But weâ€™ve had to switch off our geysers because the water flow is too low and we cannot afford to have our geyser burn.”

In this part of the country, people often resort to using wheelbarrows to collect water from communal water sources.

“My daughter has passed away and we have to bury her this weekend,â€ another Moruleng villager told me. â€œHow do we organise a funeral with no running water?”

According to Statistics South Africaâ€™s most recent General House Survey, only 45,3% of South Africans have access to safe drinking water in their houses.

Ledig, another village in the Moses Kotane MunicipalityÂ also experienced problems with its water supply.

Residents there say they are still waiting for regular piped water and a reservoir. Meanwhile, they depend on large green tanks set up in the area for their water needs, and the water is not always clean and safe to drink.

A spokesperson for the municipality told EWN earlier this year that the interruptions to the water supply were caused by the high demand due to population growth. Poor maintenance, aging infrastructure, and a lack of suitably qualified engineers and technicians to deal with the water systems are also to blame. None of these problems can be solved easily or quickly, so Ledigâ€™s water woes, like Morulengâ€™s are far from over.

Poor access to clean water is but a temporary inconvenience for urban dwellers. For much of South Africaâ€™s rural population, it is a daily struggle.