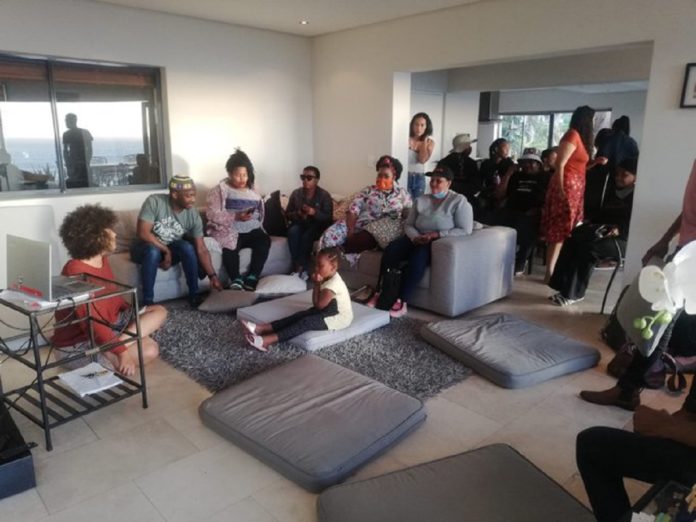 The We See You Collective took up occupation in a Camps Bay mansion on 22 September.

The host believed they would be staying for two nights but the group had moved in with the intention to make the mansion their home. The movement is made up of a group of Queer Black and Coloured activists. They stand in solidarity with women and queer people around South Africa and seek to protest the injustices of spatial apartheid and homelessness.

Their occupation, though in itself a powerful statement of stubborn South African inequalities, is however illegal.

A court has issued a notice for them to leave on 8 October 2020. While the protest has generated a great deal of discussion, we spoke to two of the protesters about how they felt on the eve of the eviction.

I am calm. It is a beautiful calmness. No anxiety at all. This is not the end of our movement. We have created an open space for public dialogue. It has also been an opportunity for society to reveal themselves, and ask questions about how people are kept safe.

The court appearance was quite traumatic, yet also affirming. It is such a patriarchal space – not being lawyers and knowing what the proceedings will entail. One of the property group’s lawyers tried to intimidate us by stating that he is queer, and this movement makes no sense. All that did was speak to the level of unconsciousness and comfort of white queer people. Being told by the City of Cape Town that a space has been made for us in Philiipi too shows how little work has gone into understanding the lived experiences of a queer person. They have no idea what someone goes through while transitioning in our communities. Our safety and dignity is not important to them.

We have been centering people who are not mobilised. We’ve been questioning what it means to be marginalised in this country. We have been querying the law and becoming an anomaly for the legal system. This makes people very uncomfortable – questioning the obedience people have. If you behave, you can climb the ladder so to speak.

Privileged rhetoric just speaks to how people are not free within themselves. Being middle-class does not disqualify anyone from working as an activist. Being in the social justice space for over a decade and working on the ground has shown me how easy it is for people who are not activists to say we are just performers.

We had to deal with verbal attacks from neighbours, and the property group who just wanted us out. There have been different modes of attack all the time from the City of Cape town, the DA, and tabloid newspapers. We didn’t enjoy the space. We know we belong in a safe and comfortable space. But we’re told we don’t belong here.

The property management group’s legal counsel referred to us as “terrorists”. I thought it was so appropriate seeing that they all looked like cartoon villains – these old Afrikaans men in court. He stated he is a gay man with a big house in Pretoria, so why should he care about it? I think they were trying to incite us. Trying to provoke us. They had these folders of research on us, our employment statuses and so on. All these passive aggressive inciting tactics.

So much of their defence was based on us being “insane” and not mentally stable. The aggravating defence was to get a rise out of us. Which we know is also rooted in racism and anti-Blackness. That kind of thing they were trying to suggest. There has been some trolling in the media with the sensationalist headlines. I also don’t want to address all of it, because that is a tactic too. I didn’t want to give it too much airtime to be honest.

There is this white neo-liberal thought too about the money we raised and spent to book the guest-house.

What was interesting about the court ruling was it being such a double-edged sword. Within the confines of property rights law it is very sympathetic. In terms of a legal standing, the time and escalation to the SAHRC and Gender Commission, and trying to find a case that had a similar precedent the court was trying to engage with that. Ultimately it does come down to that question of equity and how it is entrenched in our legal system. The opportunity with more resources is to escalate the case. Something that would set a precedent about an occupation of private property used for a profit. We also know policy takes time. The looming eviction order for tomorrow is hard to escalate these kinds of resources. It is really tough, but also an opportunity to further push for precedent.

Queer Black and Coloured people are not represented by organisations that speak from a place of privilege. We have also been very clear we won’t engage with anyone that generates phobic headlines and language, and hounds us for statements after putting this out, why would we put ourselves in the line of that kind of violence?  Saying things like “your gays are numbered”. We won’t engage with bigotry. This is not a complete loss and something that will go away. What I found so interesting from journalists and even international ones approaching was the question on intersections. Does the intersections of queerness and homelessness not muddy the issues? It is such a strange question. Activism does not need to be a single issue struggle. Activism is complex, everything intersects. You can be middle-class and stand with people in inter-class solidarity. You don’t have to perform poverty to protest it.