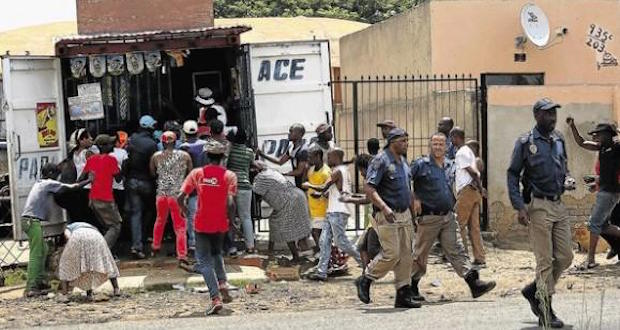 Traders affected by the looting in Soweto, south of Johannesburg, this week say xenophobic sentiment is behind the violence meted out to them.

Daily Vox executive editor, Khadija Patel, has been speaking with traders ousted from Soweto this week, many of whom have sought refuge in Mayfair, west of Johannesburg.

Patel said many traders complained of daily verbal harassment and of being told to go back to where theyâ€™re coming from.

â€œOne particular woman told me that a police person told her that she was a dirty refugee and she should go back to where she was coming from,â€ she said.

â€œNearly every person that I’ve spoken to here today says that they do not feel safe in South Africa, however, they point out that their own country [Somalia] is mired in strife and in war, and they cannot go back there either. They seem to be stuck now.â€

Many traders had been â€œlooted absolutelyâ€ she said, and did not thing they would ever able to revive their businesses as theyâ€™d been left with â€œnothing but the clothes on their backsâ€, she said.

Listen to the rest of the interview here: